All the president's garbagemen: Has Trump finally lit a dumpster fire his enablers can't put out? 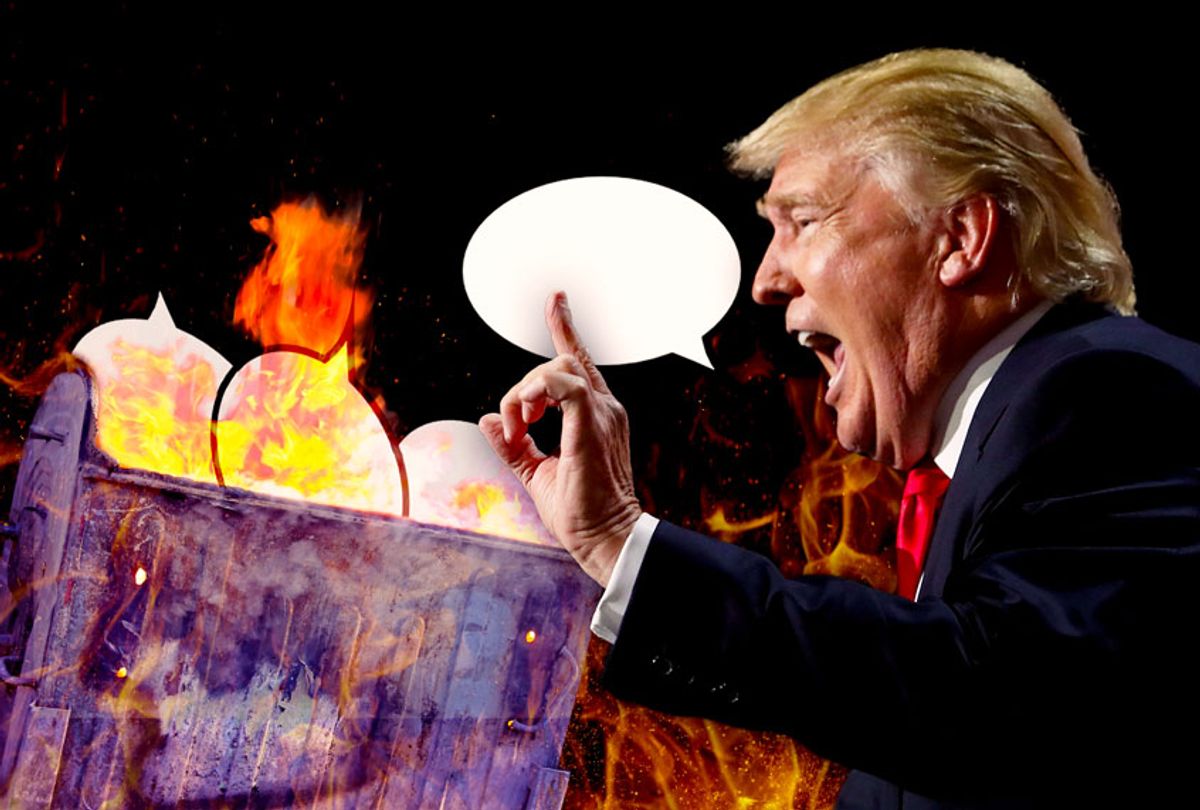 Donald Trump's presidency has always been propped up with chicken wire and spit. Which is to say: this president is so grotesquely out of his depth that he requires copious backstopping in order to artificially appear as if he's not quite as incompetent as he actually is.

Since the beginning, my rule for observing the consequences of Trump's decisions has been: Trump always makes things worse for Trump. No matter what, Trump invariably makes the wrong choices for his presidency and for the nation, damaging his own status as much as he's damaging institutions, norms, the rule of law and, generally, the rest of us. Consequently, Fox News, AM talk radio, Russian trolls and scores of Red Hat fanboys are tasked with desperately covering for his total inability to handle the gig.

You know those guys in a parade who follow behind the elephants, scooping up their crapola as they go? Trump is surrounded by guys like that. His presidency couldn't survive without them.

For instance, most of us remember when Trump floated the cockamamie notion of buying Greenland. In the wake of that story, advisers across the board had no choice but to scramble into action to awkwardly justify the ridiculousness. Trump's chief economic adviser Larry Kudlow appeared on Fox News that weekend, hilariously beclowning himself to explain why it'd be an excellent idea to buy the massive frozen island — something about "valuable minerals."

In a more recent and certainly more serious example of the backstopping, we learned the other day that Gen. Mark Milley, chairman of the Joint Chiefs of Staff, had to practically hog-tie Trump in order to keep the president from ordering regular army soldiers into major American cities to quell the demonstrations that arose in the wake of George Floyd's murder in Minneapolis. According to Dexter Filkins, reporting for The New Yorker:

In a meeting in the Oval Office, Trump expressed a desire to quell the protests by sending forces—not the National Guard but regular military—into American cities. Milley resisted. "They got into a shouting match," the senior military official told me. Trump finally backed down.

Make no mistake: Milley isn't a hero, but perhaps his obstinance here saved lives as well as prevented an unprecedented violation of the Posse Comitatus Act. For Trump's presidency as well, Milley may have prevented a deeper collapse in Trump's popularity polling, once again saving this badly inept president from his own cruel whimsy — his own worst instincts.

Unfortunately for Trump, no one was around to wrestle the president to the ground before he dragged his ponderous bulk over to St. John's church for what was the most ridiculous photo-op since Mike Dukakis hopped aboard a tank during the 1988 election.

Speaking of which, White House Press Secretary Kayleigh McEnany, who participated in the photo-op, later compared Trump's hamfisted exploitation of the church to Winston Churchill surveying the Nazi-inflicted damage in London during World War II. This is sort of like saying your office's victory in that after-work softball game was just like the famous "Giants won the pennant!" moment.

McEnany wasn't finished. She went on to compare her boss's Bible fondling to when George W. Bush visited Yankee Stadium after 9/11; she also compared it to Jimmy Carter during the energy crisis; George H.W. Bush's signing of the Americans With Disabilities Act, and so on. That's a lot of heavy lifting, commensurate with the degree of the atrocity.

Left to his own devices, Trump never would've made it to the White House, much less remained in office this long. He needed all varieties of propaganda and voter suppression tactics to get elected in the first place, not to mention a Russian intelligence-led cyber-attack on that election with the express intent to help Trump win. And to remain in office, he needed to monkey around with the hierarchy at the Department of Justice until Bill Barr arrived to flush the entire Russia investigation down Trump's golden crapper. Then he needed Rudy Giuliani's Three Stooges-level plot to strong-arm Ukraine into helping Trump cheat in this election. When Trump got caught red-handed, he required a flock of GOP dodos in the Senate to stop him from being removed from office for it.

Today, he requires all of the above players to spin his disastrous and deadly response to the coronavirus outbreak, not to mention the resulting economic crisis, in order to keep his poll numbers from descending into Nixon-resignation territory.

I can't recall another presidency held together with this much titanium scaffolding to maintain even this level of frighteningly rickety instability.

Remember that "Unskewed Polls" guy during the 2012 election cycle? He's the president now. On Monday, Trump enlisted a pollster to literally "unskew" the latest CNN poll showing Trump's popularity and election chances slipping away. Another pooper-scooper has joined the gaggle of thankless humps tasked with propping up both Trump's brittle ego and his failing administration.

You know that scene in "Pee-wee's Big Adventure" when Pee-wee's doing stunts on his bicycle, only to crash head-first into the curb? After spectacularly flipping over his handlebars, he lands in the grass in front of a group of kids, dusts himself off, and says in a snotty tone, "I meant to do that." Trump does that all the time, or he enlists his pooper-scoopers to do it for him. I meant to buy Greenland. I meant to propose nuking hurricanes. I meant to set myself up for ridicule and contempt by posing awkwardly with a Bible.

It's insulting enough when Trump has to amplify ordinary presidential things, like signing executive orders, into Herculean accomplishments that only Trump is capable of achieving. It's even more insulting when he genuinely screws up, and then announces, "I meant to do that."

But there are emerging indications showing that the scooping might not be working as well as it used to — that the crapola is beginning to overwhelm the exhaustive efforts of the scoopers to clean it up. The future of the nation hinges on whether enough swing voters see through the frantic spin, finally revealing the incompetent little tyrant hiding in his underground bunker. With one screw-up too many, it could be that all the king's horses and all the king's men are, in the end, unable to help put President Humpty together again.