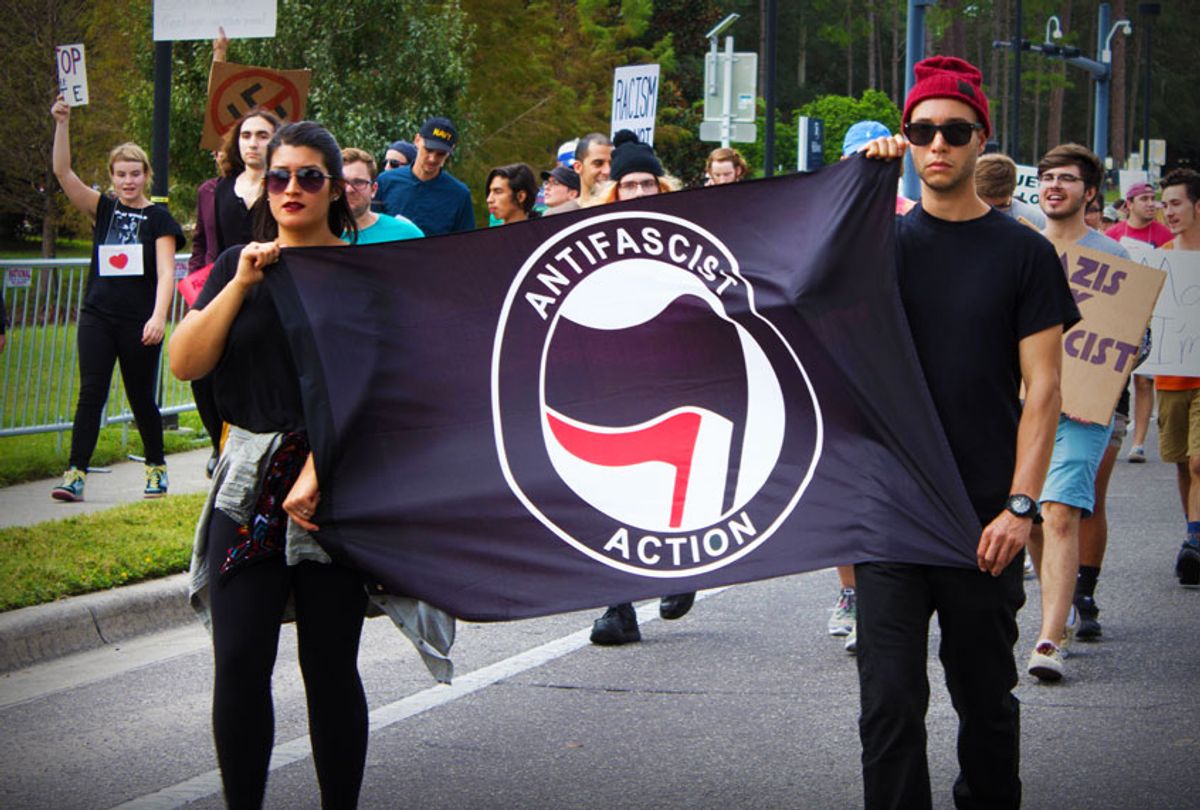 President Donald Trump on Tuesday pushed a conspiracy theory from an anonymous conservative blog. Circulated among far-right media in recent days, it claims that an elderly man recorded being shoved to the ground by Buffalo police on camera was actually an Antifa "provocateur" who faked the incident.

Police officers in Buffalo were caught on video last week shoving 75-year-old Martin Gugino in an unprovoked confrontation. Two officers stepped forward and shoved Gugino, who appeared to hit his head after falling backward. Blood could be seen coming out of his right ear. Someone on the scene yelled, "He's bleeding out of his ear."

The Buffalo Police Department initially claimed that Gugino "tripped and fell," but two officers were charged Saturday with felony assault. Both men pleaded not guilty. Gugino remains in the hospital in serious condition.

"Buffalo protester shoved by Police could be an ANTIFA provocateur. 75 year old Martin Gugino was pushed away after appearing to scan police communications in order to black out the equipment," Trump tweeted on Tuesday, citing the far-right news channel OANN, which has a history of spreading disinformation. "I watched, he fell harder than was pushed. Was aiming scanner. Could be a set up?"

Elizabeth Harrington, the spokeswoman for the Republican National Committee, briefly attempted to defend Trump's baseless claims before quickly deleting her own tweet.

The OAN segment cited by Trump baselessly claimed that Gugino appeared "to use a police tracker" on his phone and that his injury was the result of a "false flag provocation by far-left group Antifa." There is zero evidence linking Gugino to Antifa, and the claim that he had a "scanner" was based entirely on the fact that he was holding a cell phone.

Ken Dilanian, the national security correspondent at NBC News, pointed out that Kristian Rouz, the "correspondent on the story Trump cites here also works for Sputnik, a Kremlin propaganda" network.

"Rouz is no stranger to Antifa conspiracy theories, having 'reported' in 2017 that Hillary Clinton's political action committee provided hundreds of thousands of dollars to Antifa," The Washington Post reported. "Rouz has no idea what he's talking about, but that didn't stop him from elevating the blog — or stop OAN from running the report."

Kelly Zarcone, Gugino's attorney, said the baseless claims were bizarre, since not a single law enforcement officer has suggested anything happened other than what was clearly visible in the video.

"No one from law enforcement has even suggested anything otherwise, so we are at a loss to understand why the president of the United States would make such dark, dangerous and untrue accusations against him," she said, noting that Gugino was still in the ICU.

Even Trump's conservative defenders were aghast at his tweet.

"Was the blood fake, too? The police reaction — filmed on camera — staged? All fake news and false flags? One of his grossest tweets yet, which is really saying something," Guy Benson, a conservative radio host and Fox News contributor, said.

Republican lawmakers who typically rush to defend the president tripped over themselves trying to dodge reporters.

"I didn't see it. You're telling me about it. I don't read Twitter. I only write on it," Sen. Marco Rubio, R-Fla., told reporters.

"I'm not going to comment on the president's tweets," Sen. John Cornyn, R-Texas, the No. 2 Republican in the Senate, said.

Sen. Cory Gardner, R-Colo., refused to even look at the tweet when confronted by reporters.

Trump's roundly-criticized attack on the elderly activist drew a round of praise for Gugino, a longtime activist.

"Martin is an environmental justice activist and a supporter of our campaign," Jamaal Bowman, a Democratic congressional candidate seeking to unseat Rep. Eliot Engel, D-N.Y., tweeted. "He is a 75 year old man who is still in the hospital after being assaulted by police officers and left on the ground bleeding from his head. Trump is the biggest provocateur in our country."

"Mr. President, the City of Buffalo is laser focused on healing, taking action against racial injustice and building a good future for our residents," Buffalo Mayor Byron Brown added. "We pray for a full recovery for Mr. Gugino and as I have repeatedly said, the two officers deserve due process."

But Trump's conspiracy theory shocked even reporters who have spent years covering his aggressive attacks.

"If that's the theory he comes up with when a 75-year-old protester is shoved to the ground imagine what he'll say -- and what he'll try and get his supporters to do," Vox founder Ezra Klein wrote, "if he loses the election by 3,000 votes in Wisconsin."