By upholding LGBTQ rights, the Supreme Court sets back the religious right's assault on America

By upholding the rights of trans workers, the court affirmed the right of all to be free of sex discrimination 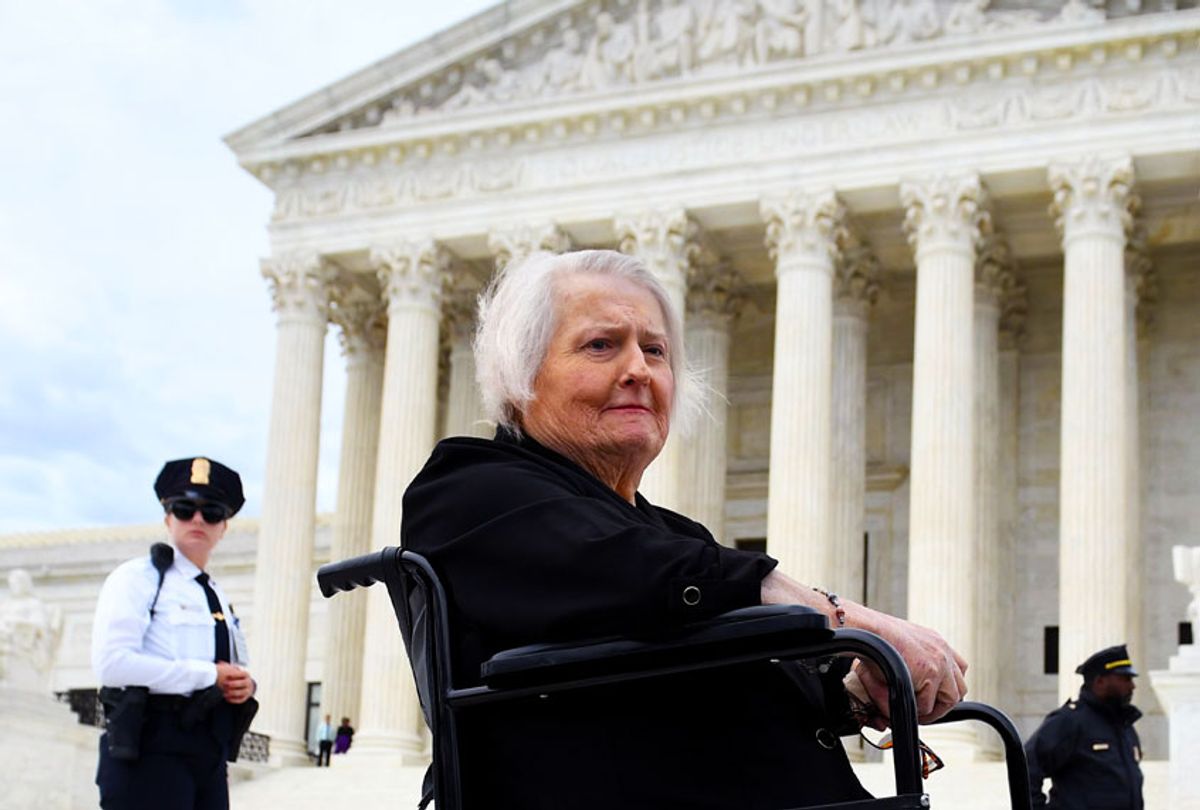 Transgender activist Aimee Stephens, sits in her wheelchair outside the US Supreme Court in Washington, DC (Getty Images)
--

In the cascade of bad news that has marked 2020, it's almost impossible to believe that something good could happen, and yet here we are: On Monday morning, the Supreme Court ruled that gay and trans workers are protected by Title VII of the Civil Rights Act of 1964, which prohibits firing someone on the basis of sex. The decision encompasses a number of cases, but the most prominent was that of Aimee Stephens, a trans woman from Michigan who was fired by her longtime employer, Harris Funeral Homes, because she had transitioned from living as a man to living as a woman. Sadly, Stephens did not live to see this victory — she died from kidney failure in May — but she will go down in history as the person who secured this critical right for trans people to do their jobs free of discrimination.

But this victory is not just a victory for trans people. This decision, surprisingly penned by Justice Neil Gorsuch, a Trump appointee, is a potentially major setback for the religious right's push to gut federal laws that protect all Americans from discrimination on the basis of race or sex. The right has been looking for a way to weaken the Civil Rights Act for decades now, and for the moment that mission has been thwarted.

Of course, conservatives, who are addicted to bad faith arguments, will never admit that was what they were trying to do by fighting against Stephens and the subjects of the other cases under consideration, Gerald Bostock and Donald Zarda, two gay men who were fired because of their sexual orientation. Alliance Defending Freedom, the Christian right group that was representing Harris Funeral Home, is still pretending it was doing this to protect women.

"Redefining 'sex' to mean 'gender identity' will create chaos and enormous unfairness for women and girls in athletics, women's shelters, and many other contexts," the group tweeted after the decision came down. "Civil rights laws that use the word 'sex' were put in place to protect equal opportunities for women."

This is a tactic the religious right has embraced in recent years to justify its assault on trans rights: Portraying themselves as the defenders of cisgender women, whose rights, they claim, will be undermined if trans women are also protected. This tactic, unfortunately, has sucked in some cisgender women who consider themselves feminists, including J.K. Rowling, author of the Harry Potter series, much to the consternation of her fanbase.

In reality Alliance Defending Freedom and other religious right groups aren't trying to protect women, whether they're cis or trans. On the contrary, this case is a stalking horse for a larger attempt by the religious right to gut civil rights laws that protect women at school and in the workplace. This same group, after all, has been fighting to allow employers to forbid female employees from using their insurance plans to pay for contraception. Giving bosses the right to punish female employees for their private sex lives should definitely be considered a form of discrimination.

One reason we can be sure that the right was using these cases as a way to undermine women's rights and civil rights in general is that the most relevant precedent was a 1988 case when the court ruled in favor of a woman who sued her employer for discriminating against her because she didn't fit their notions of femininity. Ann Hopkins was denied partnership at the firm of Price Waterhouse because male executives disliked her manner of dress, her love for motorcycles and what they deemed generally unladylike behavior. In a 6-3 decision in Hopkins' favor, Justice William J. Brennan argued that sex stereotyping was a form of sex discrimination.

In a concrete way, the Stephens case was about the same basic problem of sex stereotyping. Stephens was a woman and lived as a woman, and even went to great pains to gradually transition for the comfort of her employer and her community. But because her employer had stereotypical notions of what a woman "should" be — in this case, that a "real" woman is someone assigned the female gender from birth — he fired Stephens anyway.

Similarly, the two male litigants, Bostock and Zarda, argued that it was a form of sex stereotyping to require men to adhere to an employer's idea of masculinity by being straight.

As Gorsuch wrote, "it is impossible to discriminate against a person for being homosexual or transgender without discriminating against that individual based on sex."

If the court had ruled against Stephens, Bostock and Zarda, there's a not-small chance that would have opened the door to rolling back all manner of laws protecting people from sex discrimination. The rights of these individuals to be trans or be gay is the same right that allows a cisgender woman to wear slacks to work or allows a straight man to take up knitting as a hobby, even if those things might offend an employer's idea of proper gender expression.

The larger lesson here is that we're all in this together. The right of all women to live freely is strengthened by protecting the rights of trans women. No boss should be able to tell you you're not performing your gender right because of how you dress, how you act, whether you have kids, who you sleep with or what genitals you were born with. It's a lesson that Neil Gorsuch, of all people, was able to grasp. Surely J.K. Rowling can figure it out too.