"If this race is competitive, the GOP is in a lot of trouble in a lot of places," data guru Nate Silver says 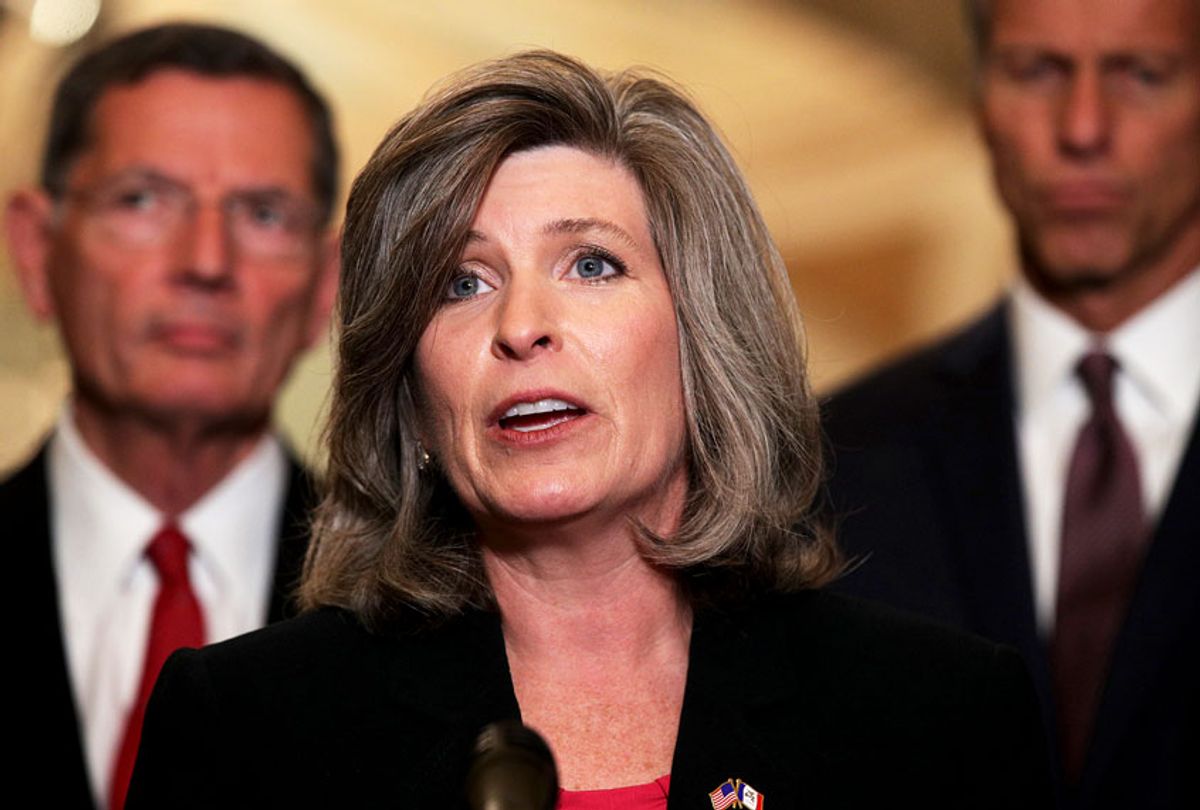 Sen. Joni Ernst, R-Iowa, trails Democratic challenger Theresa Greenfield in her re-election bid for her once "safe" Senate seat, according to the results of a new Des Moines Register poll.

The poll shows that 46% of likely voters back Greenfield. In contrast, 43% support Ernst, who won her first Senate election by nearly 10 points in 2014.

Ernst, who echoed Sen. Susan Collins, R-Maine, when she said that she voted to acquit Trump during the impeachment trial because he learned his lesson from the ordeal and praised the president's widely-panned coronavirus response, has seen her approval rating plummet over the last year. Though 57% of Iowa voters approved of Ernst's job performance last year, that number fell double digits to 47% in March. Though it has since inched up to 49%, pollster Ann Selzer said that there were numerous "warning signs" for the Republican in the poll.

The poll shows that Ernst's favorable rating has fallen from 56% to 45%. While she still has strong support from evangelicals, rural voters and white men, who carried Trump to a 9-point win in the state in 2016, her backing among key voting groups has fallen sharply.

Greenfield leads 42-38 among independent voters and 54-34 among women voters. Though white women without a college degree are often a stopgap for Republicans, the poll shows that the group actually backs Greenfield by an even larger margin of 60-29.

"More women typically vote in elections than men," Selzer told the Des Moines Register. "And so if there is this kind of gap, this kind of lead with the majority of voters, it's very difficult to overcome that."

Voters who spoke with the Des Moines Register noted that Ernst was more experienced than when she ran six years ago, but that is not necessarily a good thing.

"It seems she's playing to the political lobbies of big corporations instead of the everyday Iowan," Terry Dvorak, an independent voter who backed Ernst in 2014, told The Register. "I think she has slipped right into the corrupt Washington base. I mean, the whole administration is that way. She fits in with Trump, which I don't like either. That whole crowd is getting worse and worse to me."

Trump on Thursday formally threw his support behind Ernst.

"Few people have ever fought as strongly for Iowa as Senator @JoniErnst! A combat Veteran, her service to Iowa and our Country is remarkable! Joni is Strong on Crime, our Military, Vets, Low Taxes and will protect your [Second Amendment] at all times," the president tweeted, calling Greenfield a "Radical Liberal."

Trump's attack, which echoed similar claims attempting to paint political centrists like Biden as radical leftists, is particularly ironic given Greenfield's reputation as a moderate.

"Greenfield grew up on a farm as the daughter of a crop-duster. She previously worked as an urban planner and now runs a real estate development company," Vox reported after she won her primary earlier this month. "She'd picked up the endorsements of the Democratic Senatorial Campaign Committee, as well as backing from powerhouse groups like Emily's List and Iowa's AFL-CIO. The party has already begun ramping up its spending in the race, which is among those that will be one of the most closely watched and expensive during the general election this fall."

Despite the recent polls, the Cook Political Report currently ranks the race as "Lean Republican."

With the latest numbers, Ernst joins fellow Sens. Cory Gardner, R-Colo., Martha McSally, R-Ariz., Thom Tillis, R-N.C., and Collins as the most vulnerable Republicans defending their seats this year. The GOP currently holds a 53-47 majority in the Senate.

Data guru Nate Silver, the founder of election forecaster FiveThirtyEight, said Republicans are in big "trouble" if even Ernst's race has become competitive.

"This feels like a little bit of a canary in the coal mine," he wrote. "Ernst has been considered a rising star; Iowa has trended red; she hasn't had any particular scandals or gotten in any particular trouble. If this race is competitive, the GOP is in a lot of trouble in a lot of places."