Donald Trump has preyed on the American psyche like a demon. At last the exorcism has begun

I've wondered whether America could recover from this president. A movement and a moment have made that possible 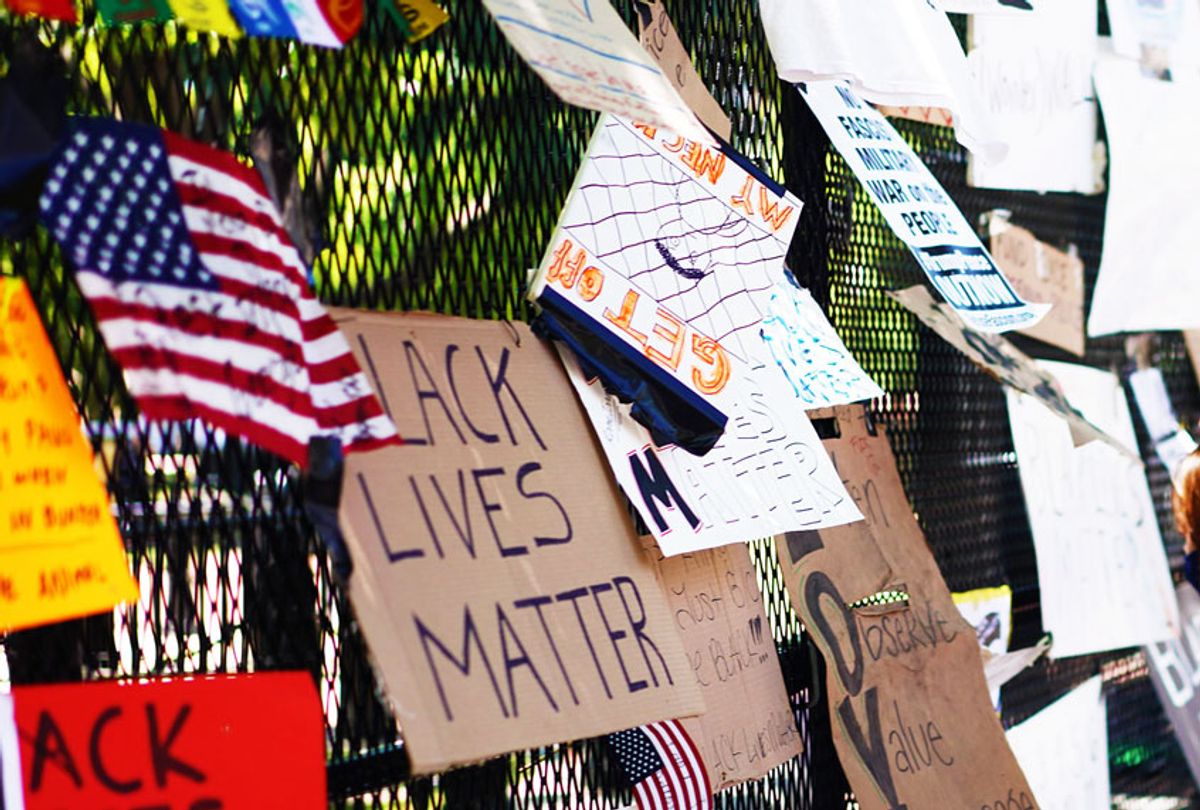 Posters and placards on the security fence on the north side of Lafayette Square, near the White House, in Washington, DC (Getty Images)
--

What a strange time to be feeling a sense of hope.

The coronavirus pandemic rages on. More than 20 million Americans are unemployed. Protests against police violence have been met with yet more police violence. Donald Trump spews divisive conspiracy theories and hatred. There is no one the nation can turn to for solace.

Eight out of 10 voters believe that things are out of control in the United States, and I don't understand what's wrong with the other two.

And yet, the millions of protesters expressing their rage and suffering in the wake of the agonizing videotaped police killing of George Floyd have made something almost magical happen in this country.

They've reminded a supermajority of Americans that we are better than this.

Ever since Donald Trump won the 2016 presidential election, I've been concerned about how we as a nation would recover once he was gone.

I never imagined things would be this bad, of course.

But I worried a lot about what would happen to the bumpy but gradual march toward justice and human rights that we had been experiencing during my lifetime, and that was so important to me and my love and respect for this country.

Trump's presidency had stopped it cold and set it back decades. Suddenly, all the things that were becoming unacceptable to say out loud in civil society were being shouted by the man in the White House. Soon enough, they became baked into national policy. The ugliest voices in our country became among the loudest, and they seemed to have no shame.

I was afraid it would be a very long time, and would take an awful lot of work.

But something incredibly moving has happened, a combination of profound despair and a powerful catalyst. As Black Lives Matter co-founder Opal Tometi explained to the New Yorker:

[W]e have been sitting in our homes, navigating the pandemic, dealing with loved ones being sick, dealing with a great deal of fear and concern about what the day and the future will hold. We have millions of people who have lost their jobs and filed for unemployment and are living paycheck to paycheck and hand to mouth, and I believe they are just thoroughly fed up and thoroughly beside themselves with grief and concern and despair because the government does not seem to have a plan of action that is dignified and comprehensive and seeks to address the core concerns that the average American has.

After three weeks of sustained protest — and the incredible outpouring of public support for the protesters seen in opinion polls — it feels like a lot of Americans are sharing the sentiment that enough is enough.

Out of pain, hope

The knee on the neck with the hand casually in the pocket as a Black man struggles to live — that has become a powerful, lasting meme for Trumpism, its racism, cruelty and abuse of power.

So has the violent assault on peaceful protesters outside the White House so Trump could stage a political photo op.

But over the course of three weeks of the broadest protests in U.S. history, change feels possible.

You can almost hear Americans saying: "This is not who we are."

And that is hopeful. Breathtakingly hopeful.

Black Lives Matter has gone from being a radical slogan to being a simple fact. And the protests are about more than just police violence, as New York Times opinion columnist Jamelle Bouie wrote last week:

They're about structural racism and the persistence of white supremacy; about the unresolved and unaddressed disadvantages of the past, as well as the bigotry that has come to dominate far too much of American politics in the age of Trump. Born of grief and anger, they're an attempt to turn the country off the path to ruin.

Policymakers are already responding in a way that feels like the beginning of something momentous. What happens in Congress and the White House and the statehouses and the city halls in the next few weeks could be significant. But beyond that, one can now imagine Democrats clinching both houses of Congress as well as the presidency and passing legislation as sweeping and historic as the Civil Rights Act of 1964.

One can also imagine Congress passing post-Trump reforms along the lines of post-Watergate reforms, to fix the huge flaws in the American political system that Trump exposed and exploited — from voting rights and the Electoral College to the immense unchecked powers that have been granted to the American presidency.

Don't look to the news media to explain what's happening, though.

Our top news organizations have never been honest with the public about how profoundly dangerous and retrograde a president Trump has been, even though it was incredibly obvious that he would be, from the get-go.

They normalized his behavior when they should have been declaring national emergencies.

So even now, when the evidence of his malignancy screams out in every interview and tweet, the national media's only response is slightly more daring euphemisms.

They can't write that the country is purging itself of an infection, because they'd have to admit they failed to diagnose that infection in the first place.

Trump was a mad king long before all of this started, abusing his power for corrupt and cruel purposes. But in the last several months, he has been more fully revealed to the American people.

His response to the coronavirus pandemic was incoherent, ignorant, clueless, duplicitous and just plain stupid. The consequences have been deadly.

And now the protests have further exposed his very soul: The nation is in pain, and Trump can't even conceive of it — not to mention feel it or respond to it — as anything but a personal attack.

This man so clearly needs to be rejected from the body politic.

But fully rejecting Trump and Trumpism was always going to take more than an election.

Some of them — maybe a lot of them — will have to look past their revulsion over his racism, his lying, his lack of empathy, his narcissism, the way he treats other human beings. But they'll vote for him anyway.

So the election was never going to be the nearly-universal rejection of Trump and Trumpism the country needed.

It turns out that what we needed was a movement.