The pro-Trump Fox News host opened his show by saying, "Black Lives Matter is now more popular than the president" 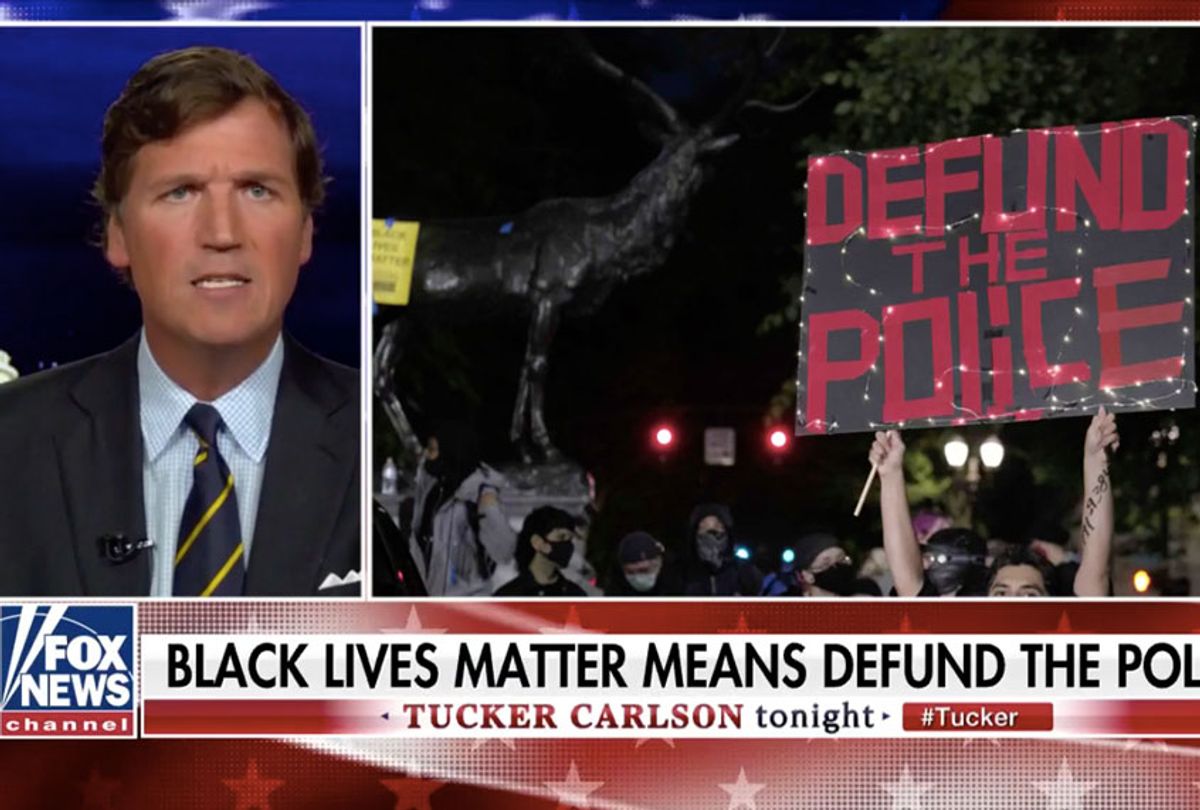 Fox News host Tucker McNair Swanson Carlson kicked off his primetime program Monday with a monologue about a protest in Texas, which was so ridded with inaccuracies that the Fort Worth Police Department felt compelled to issue its own fact-check.

In a lengthy diatribe, Carlson conceded that Black Lives Matter was more popular than President Donald Trump by 20 points and claimed that the mantra was "the entire premise behind our founding documents." However, those documents literally said black lives mattered three-fifths as much as those of landowners who were free, male and white.

Carlson then turned his focus to Fort Worth Police Chief Ed Kraus, who the Fox News host criticized for what he described as a negligent level of obsequy to violent protesters. Carlson said he chose to call out Fort Worth, in particular, because the city was led by a Republican. This statement was essentially the extent of his accuracy.

"When police arrived to disperse them, they threw rocks and a bottle of bleach. Three police officers were injured," Carlson, who previously dubbed the protests over Floyd's death in police custody a "form of tyranny," inaccurately said.

"The mob then went on to loot and vandalize businesses," the host, whose stepmother is an heir to the Swanson frozen-food empire and father a one-time U.S. ambassador to the Seychelles, inaccurately continued.

"Dozens of rioters were arrested for this," Carlson, who once registered as a Democrat in Washington so he could weigh in on primaries, inaccurately alleged.

"Ten days later, the city's police chief Ed Kraus announced that he was dropping all charges," Carlson, who was the first contestant eliminated on Season 3 of the reality show "Dancing with the Stars," inaccurately claimed.

"Kraus released a statement suggesting that the real criminals in the riot were not the rioters but his own police officers, who he suggested would be reined in and perhaps punished," Carlson, who claims to have gone into journalism after his application to work at the CIA was denied, inaccurately added.

"This is just one step along a long journey," Carlson accurately quoted. He then accurately read another line from the statement: that police were "committed to walking path of reform with our community."

The Fort Worth Police Department responded in a statement.

"This information is absolutely inaccurate and is not consistent with the actual facts," the statement said. "The only charges dropped were minor misdemeanors, which did not involve property or personal crimes."

The Fort Worth Star-Telegram covered the fact-check in more detail.

Fort Worth police arrested at least 40 protesters on May 31 under suspicion of inciting a riot after SWAT officers deployed tear gas to disperse a crowd following a long, peaceful standoff on the West 7th Street bridge. However, no businesses were looted.

Though Kraus originally did say that the department would not charge the protesters, he later clarified that anyone who committed assault or vandalized a business would be charged.

The department also addressed Carlson's claim that Kraus had suggested "the real criminals in the riot were not the rioters but his own police officers."

"This too is absolutely inaccurate and a gross mischaracterization of any statement released by Chief Kraus or the department," it said.

"Recklessly releasing such inaccurate, unverified information does nothing for the good of the public and simply creates an environment of confusion and bitterness during a time in which so many are wanting their voices heard," the statement added.

Though Carlson said three officers were injured, only one officer was hit with a projectile. Another officer was injured during an arrest.

Carlson was also wrong about fundamentals of the scene, according to officials. He said police came to move demonstrators who had blocked a downtown bridge. In reality, the police blocked West 7th Street Bridge when protesters tried to cross into the city's cultural district.

Below is the statement in its entirety:

This evening, FWPD was notified of a Fox News story reported by Tucker Carlson alleging that on May 31, 2020, protestors looted and vandalized "businesses and dozens of rioters were arrested for this." Mr. Tucker went on to say that Chief Ed Kraus "dropped all charges against the rioters." This information is absolutely inaccurate and is not consistent with the actual facts. The only charges dropped were minor misdemeanors which did not involve property or personal crimes. Mr. Carlson went on to say that Chief Kraus suggested in a released statement that he believed those who were committing crimes were officers with the FWPD. This too is absolutely inaccurate and a gross mischaracterization of any statement released by Chief Kraus or the department. Recklessly releasing such inaccurate, unverified information does nothing for the good of the public and simply creates an environment of confusion and bitterness during a time in which so many are wanting their voices heard.

The Fort Worth Police Department would like to reassure our community, our officers, and our nation that our department is committed to ensuring timely and accurate information is disseminated to the public while remaining transparent.

Indeed, police departments around the country are weighing the value of pursuing charges against individuals arrested during protests.

Prosecutors in Washington dropped rioting charges against most protesters detained last week. Manhattan District Attorney Cyrus Vance also said last week that he would not press illegal assembly and disorderly conduct charges. (The city, however, has not signed on to the plan.)

Amid peaceful protests, Detroit Police Chief James Craig said last week that his department would not enforce the city's 8 p.m. curfew. Two weeks prior, Craig held up a box of railroad spikes in a press conference, which he claimed protesters had thrown at police.

The head prosecutor in Richmond, Va., declined to pursue jail time for anyone who was only charged with violating curfew. There was no commitment to dropping charges altogether.

City and police officials in Kansas City, Mo., will debate Tuesday whether to press charges for nonviolent crimes during the protests. Local TV station KSHB reported that the leader of the city's police union said such policies would lead to "anarchy." The county prosecutor, however, disagreed.

You can watch the clip below via Fox News: