Haunted America: The ghost of George Floyd and the ghost of the Confederacy

This wave of protests against injustice could lead to American renewal. But the ghosts won't let go easily 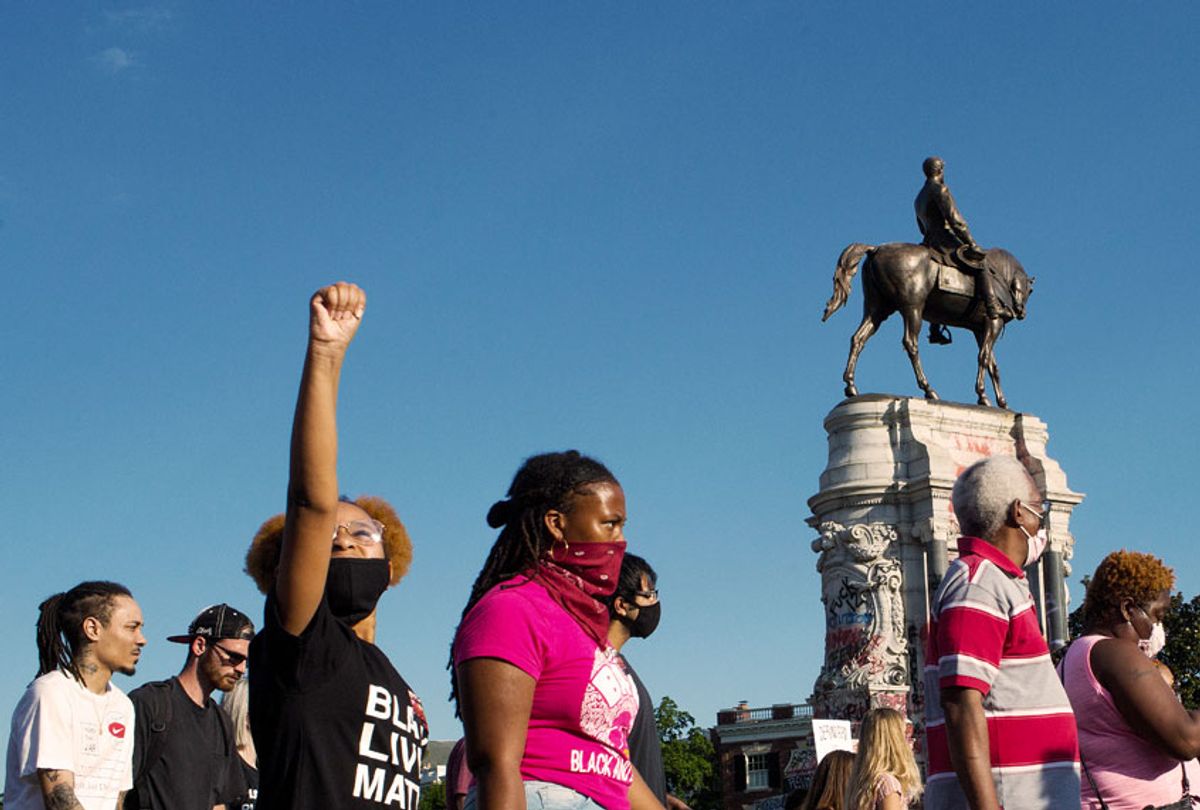 America is haunted. There are many old ghosts and other spirits trapped along the color line both in this country and around the world. Most of these spirits and ghosts have never been exorcised. Some are poltergeists and demons, ready to be summoned up by the wizards and warlocks of racism and white supremacy, including President Donald Trump and his minions.

In that sense, "Make America Great Again!" is an incantation that channels the worst parts of America's past and present to hurt Black and brown people.

But those people are not passive in their suffering. They resist and fight back. That has been true for centuries. It will continue to be so far into the future.

In her new essay for the Atlantic, author and professor Imani Perry reflects on that strength:

A lot of kind statements about black people are coming from the pens and minds of white people now. That's a good thing. But sometimes, it is frankly hard to tell the difference between expressions of solidarity and gestures of absolution. (See, I'm not a racist, I said you matter!) Among the most difficult to swallow are social-media posts and notes that I and others have received expressing sorrow and implying that blackness is the most terrible of fates. Their worrisome chorus: "I cannot imagine … How do you … My heart breaks for you … I know you are hurting … You may not think you matter but you matter to me." Let me be clear: I certainly know I matter. Racism is terrible. Blackness is not.

I cannot remember a time in my life when I wasn't earnestly happy about the fact of my blackness…. So many people taught us to be more than the hatred heaped upon us, to cultivate a deep self-regard no matter what others may think, say, or do. Many of us have absorbed that lesson and revel in it.

Several weeks ago, White America's wicked tradition of lynchings and other racialized violence against Black people was summoned up in Minneapolis. In that moment a white cop put his knee on the throat of an unarmed Black man named George Floyd and posed like a big game hunter on safari in Africa while crushing out Floyd's life.

Floyd pleaded for his mother, begging "I can't breathe."

That moment when history came crashing down on George Floyd – literally – was as if the 19th- and 20th-century tradition of lynching photography was updated for the age of digital media and the Internet.

New research by the Economic Policy Institute connects the murder of George Floyd to a much older history of extrajudicial murder by the country's "law enforcement" agents and other white enforcers of the color line:

The agonizing similarity in the death of Floyd, Ahmaud Arbery, and Breonna Taylor, is that current and former police officers participated in their lynching. From 1877 to 1950, nearly 4,000 individuals were the victims of lynchings. Some have speculated that as many as 75% of historical lynchings "were perpetrated with the direct or indirect assistance of law enforcement personnel." Despite drawing attention from large crowds, many perpetrators of historical lynchings were never charged with a crime — a fact seen in many modern-day officer-involved shootings.

There are other examples of how America's old demons of racism and white supremacy still haunt our society today.

Political scientists have shown that Southern counties which had a Ku Klux Klan chapter in the 1960s were more likely to abandon the Democratic Party and become Republican. This shift in party allegiance came in large part in response to the Democratic Party's support of the civil rights movement.

A 2016 YouGov/Economist public opinion poll suggested that 20 percent of Trump supporters believe that Black people should still be slaves.

In a recent interview on Fox News, Donald Trump said, "So I think I've done more for the Black community than any other president, and let's take a pass on Abraham Lincoln because he did good, although it's always questionable — you know, in other words, the end result."

Given Trump's repeated embrace of the treasonous Confederacy, his administration's repeated fawning over Nazis, the Klan and other white supremacist terrorists (his "very fine people"), it would seem that our president believes that Lincoln's decision to end slavery in the South during the Civil War was incorrect.

To quote William Faulkner: "The past is never dead. It's not even past."

In that spirit these weeks of protest and people's uprisings against police brutality and social injustice sparked by the murder of George Floyd are a struggle over American identity and public memory. In the tumult of a country in spasm, the Confederate flag and other symbols of white-on-black chattel slavery are a battleground.

Across the South and elsewhere the Confederate flag has been ripped from flagpoles and burned. More than a dozen statues to slavers and white traitors, such as Robert E. Lee and Stonewall Jackson, have been vandalized, torn down by the people's hands or removed by local governments.

The headquarters of the United Daughters of the Confederacy in Richmond, Virginia — the onetime Confederate capital city — was set on fire.

In the "heritage not hate" street theater of 21st-century Lost Cause ideology, small groups of pathetic white men (and some women) have taken up arms to "protect" Confederate monuments, most of which were constructed decades after the end of the Civil War, in the 1920s and 1930s.

Once and again, the psychological wages of whiteness are poison. They damage the minds and hearts of all who imbibe or otherwise consume it.

I emailed my friend Joe R. Lansdale, a Texan, an acclaimed fiction writer and the author of the Hap and Leonard series of novels and stories, for his thoughts about these ongoing debates about the Lost Cause and the Confederacy. I needed his help in making sense of the mysterious ways of white folks who defiantly cling to the ignoble history of the Confederacy.

The Dixie flag when I was growing up had moved from being a symbol of the Confederacy to a symbol of the South.  That flag wasn't just about the good old South, summer breezes, grits and gravy. To a large segment of the Southern population it was a sign of subjugation and inhumane treatment, and they were damn right to feel that way. At some point, my thinking underwent a seismic shift; the earth was no longer solid under my shoes. Why was the Klan always carrying it so frequently along with Nazi symbols? It was there to recognize the defeated South and honor it as a lost and noble cause. That flag was so institutionalized in our minds many of us could jeer at the Klan and plead for civil rights and fail to be bothered by its presence in the courthouse. It was a slap to the face of black people, and once this realization came to me, it was a slap in my ignorant white face as well.

Though the Union was preserved, in the end the South sort of won. They continued slavery disguised as Jim Crow, where black people lacked rights, were paid crap wages for horrible jobs, not allowed to be properly educated, and voting was frequently denied. They weren't even able to go into a restaurant, use the same restrooms, drink from the same water fountains, and by violating these Southern rules, they were often tortured and murdered.

The Confederate flag has got to go and should have found its place into museums long ago, and with annotation as to what vileness it had stood for during the Civil War, and after. The monuments to traitors have to go as well. Remembering history, and the people who made that history is fine, but honoring people who supported the subjection of one race over another is no different than the Nazis who put people in gas chambers and worked them to death. Knowing history is supposed to be a good thing. It shouldn't be forgotten, good or bad. It's supposed to keep us from repeating the faults of the past, but sometimes I wonder. Take them down.

The United States has had three foundings. The Declaration of Independence and the signing of the Constitution are one founding. The end of slavery and Reconstruction are a second. The victories of the long Black Freedom Struggle and the civil rights movement in the 1950s and 1960s are America's third founding.

Donald Trump's election was a high point in the counterrevolution against this progress towards multiracial democracy.

The George Floyd protests and the people's uprising against the Age of Trump and the forces which birthed his neofascist movement — if they are successful — could appear, from the future, as America's fourth founding.

What will this new and better America look like?

How hard will Trump and his followers and allies fight? What will they do to channel America's demons and poltergeists in order to hold on to power at any cost, and by any means available?

We will begin to know the answers soon as we draw closer to Election Day in November, when the American people will make a crucial choice about whether they want to live in a demon-haunted country.