In her new travel food series, the "Top Chef" host interrogates the mix of cultures that comprise American cuisine 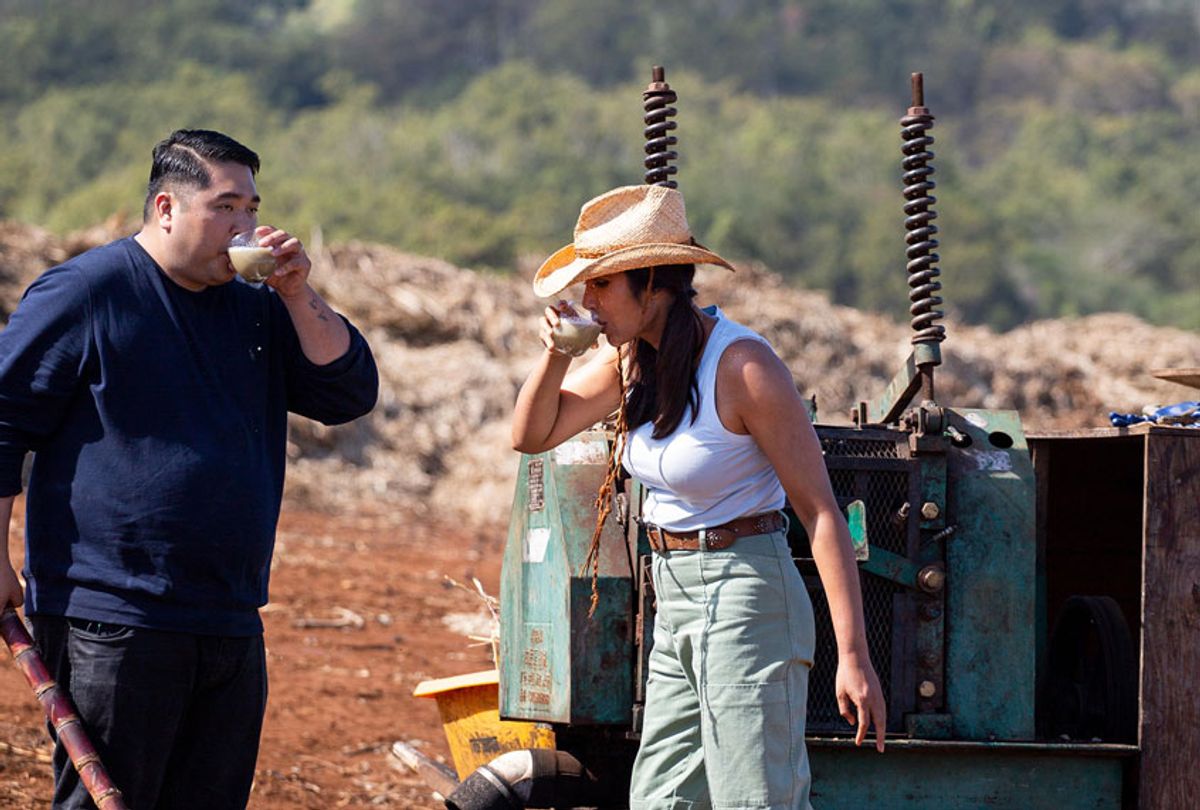 Found within the first three minutes of "Taste the Nation," Hulu's new food series hosted by Padma Lakshmi, is a montage of clips that distills the heart of the show. It begins with footage of Mexican cartel members wielding guns, then quickly cuts to an American holding up a "Build That Wall" poster, then finally settles on a slow-motion video of hands rolling a burrito.

"Americans love Mexican food," Lakshmi says, noting that Americans eat more salsa than ketchup. "But what about the hands making that food?"

It's clear at this point that "Taste the Nation" isn't just a food-filled, cross-country road trip. This series is one that explores just how interconnected food, tradition and personhood are — and in a country that is an undeniable melting pot, what has happened as the personhood of certain immigrant groups becomes politicized.

Lakshmi — who immigrated from Madras (now Chennai), India when she was four, and is an outspoken advocate for both the independent restaurant industry and immigrant rights — gamely interrogates these complex issues through the lens of her apparent love of food. After watching her for 15 seasons as host of "Top Chef," it's a joy to see her in this context.

We fittingly start in El Paso, a community that anthropologist Dr. Gina Núñez-Mchiri describes to Lakshmi as "the borderlands, a third space," which is a microcosm for American culture in general. El Paso is located about 8 miles away from Juarez, Mexico and its traditions are a fluid mix of Mexican and American. Residents have taken the best of both country's cuisines, melding and adapting them.

While there, Lakshmi visits chef Emiliano Marentes and his restaurant Elemi, known for his menu that highlights what Mexican cuisine was like before European influence and colonization. Together, they make a taco with confit mushrooms, quesillo cheese, grilled avocado, black beans and smoky eggplant — all served on a scratch-made corn tortilla.

Lakshmi takes a moment to describe it:, oozy cheese, creamy beans, savory mushrooms. The kind of taco that's so good it could make you cry. Anyone who loves food gets what she's feeling, this moment when you're between bites and suspended in a kind of ecstasy, but then we're grounded by Marentes.

"It's hard for me to think that people are going to accept my tortillas before they accept my cousins," he says.

"Taste the Nation" is filled with these moments; it's a series that deftly breaks form from the traditional culinary travelogue again and again. In some food shows, it seems like hosts are stretching to make a political point (or they go out of their way to skirt around it). Lakshmi, instead, confronts it head-on. In this way, it's similar in form and tone to David Chang's "Ugly Delicious," though "Taste the Nation" is organized around location — Lakshmi visits 10 cities including Charleston, Phoenix and San Francisco, and one type of cuisine — rather than dishes.

Why? Because when you eat in El Paso, your experience is built on immigration and border-crossing.

Before leaving town, Lakshmi stops at H&H Car Wash and Coffee Shop, a diner specializing in the chile relleno and breakfast burritos. Most of the women working behind the counter commute from Juarez daily.

She's surprised to meet the owner, Maynard Haddad, who is a second generation Syrian immigrant and staunch conservative. He voted for both Bushes, Reagan and supports Trump ("He's full of s**t, but I like him," Haddad explains). But he says he loves Mexicans — he grew up with them, and people know it — and has trouble making sense of recent border policy changes.

"In El Paso, nothing is ever black and white," Lakshmi says.

And throughout the series, it becomes increasingly apparent that the concept of "American food" isn't black and white either. Over the course of ten episodes, Lakshmi and guests dive into questions like is the hotdog really American? What does modern indigenous cooking look like? Why hasn't Indian food caught on in America the way Thai or Chinese food has? What is this weird American Chinese dish called chop suey? And how much of what we think of as "traditionally American" food is rooted in the contributions and traditions of enslaved West Africans?

Lakshmi has real presence here, moreso than her admittedly fun moments on "Top Chef." We see her speak in multiple languages, from Spanish to Tamil, see her really get her hands dirty cooking and eating produce fresh from the ground, and witness her whimsical sense of humor that's previously been relegated to her Instagram posts. Her immigrant story is also woven in through the episodes, not just the one about Indian cuisine, and at the heart of it is her relationship to food.

Watching "Taste the Nation" right now is admittedly a little surreal, as the novel coronavirus pandemic has rendered travel nearly impossible and crushed many independent restaurants around the county, and as thousands of people have taken to the streets to protest for the recognition that black lives do matter.

But honestly, this show couldn't have debuted at a better time.

In Lakshmi's hands, "Taste the Nation" serves as a meditation on whose contributions to our country have been recognized and commodified, and whose have not. It's a reminder that many of the restaurants that make America unique won't make it without our support. And, put simply, it's about looking up from your plate and acknowledging the person who made the food served on it.

All episodes of "Taste the Nation" are now streaming on Hulu.