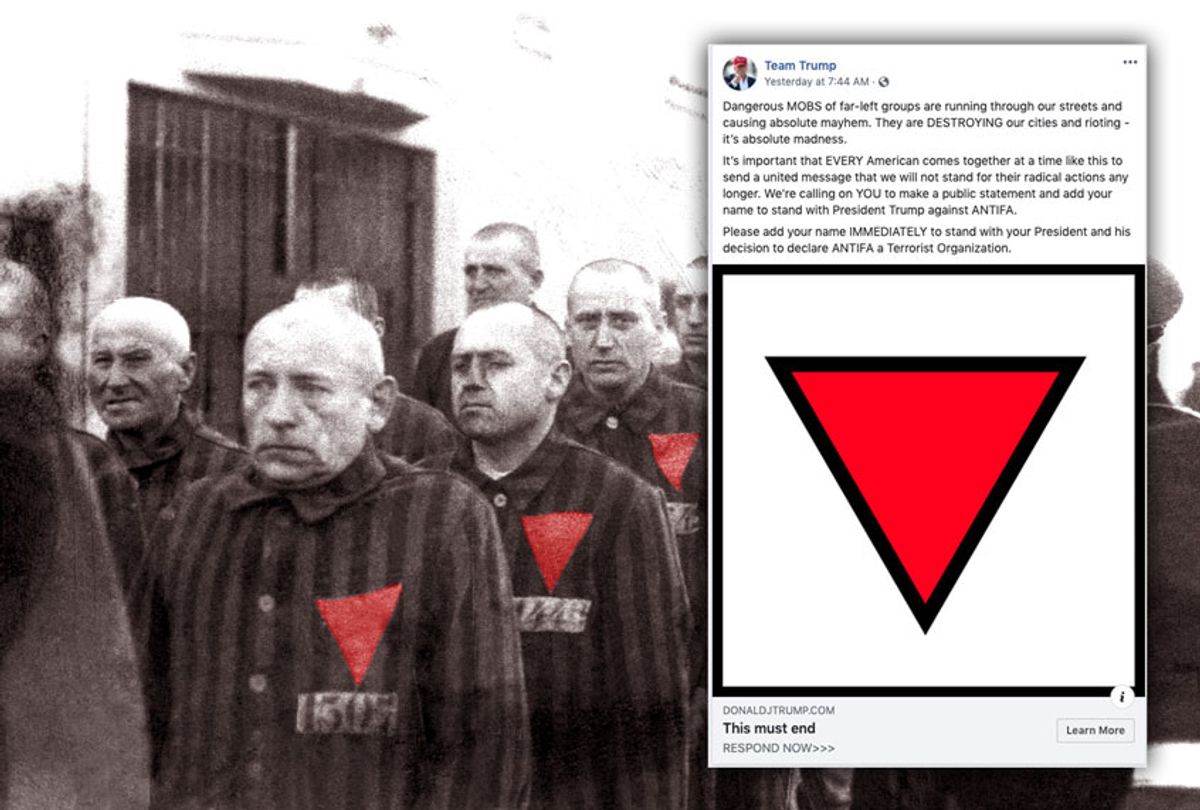 Prisoners at the concentration camp at Sachsenhausen, Germany, wearing triangles on their uniforms, are marched outdoors by Nazi guards on December 19, 1938 | A Trump 2020 advert the ran on Facebook (Photo Illustration by Salon/Getty Images/Facebook)
--

Facebook on Thursday said it had pulled a series of ads and organic posts from President Donald Trump's 2020 campaign for violating its policy on organized hate. The ads and posts featured an upside-down red triangle, known to be Nazi iconography.

"We removed these posts and ads for violating our policy against organized hate," a Facebook company spokesperson told Salon. "Our policy prohibits using a banned hate group's symbol to identify political prisoners without the context that condemns or discusses the symbol."

The Anti-Defamation League said in a statement that the triangle used in the ads "is practically identical to that used by the Nazi regime to classify political prisoners in concentration camps."

Triangles were often sewn on the jackets and pants of prisoners interned in concentration camps as visual code to denote their class. A red triangle signified a political prisoner, including anarchists, communists, socialists and individuals who protected Jews.

The posts garnered hundreds of thousands of impressions, according to an analysis from Media Matters, which first reported the ads.

Media Matters identified 88 variations. "88" is a common white supremacist code for "Heil Hitler," because the "H" is the eighth letter of the alphabet. A Facebook spokesperson did not immediately confirm to Salon that the campaign had run 88 different ads/posts.

The ads also began with the same sentence: "Dangerous MOBS of far-left groups are running through our streets and causing absolute mayhem. They are DESTROYING our cities and rioting — it's absolute madness."

That sentence contains 14 words, or the same number of words as a popular white supremacist slogan. White supremacists routinely use the two numbers together as a code: 1488.

No Facebook users exposed to the ads would have been aware that there were 88 versions. The Trump campaign did not reply to Salon's questions about who created and managed the campaign and whether it would investigate the "1488" numerology.

The campaign claimed the ads were strictly designed to get Trump supporters to back the president's call to designate the antifa movement as a terrorist group. Trump tweeted on May 31 that he would declare antifa a "terrorist organization."

However, antifa does not have leaders or spokespeople or any centralized structure. Even if antifa were an organization, there is also no domestic terrorism law which would allow Trump to designate it a terrorist group.

Tim Murtaugh, the Trump campaign's director of communications, told Salon in a statement that "the inverted red triangle is a symbol used by Antifa, so it was included in an ad about Antifa."

"We would note that Facebook still has an inverted red triangle emoji in use, which looks exactly the same, so it's curious that they would target only this ad," he said. "The image is also not included in the Anti-Defamation League's database of symbols of hate, but it is ironic that it took a Trump ad to force the media to implicitly concede that antifa is a hate group."

"Antifa" is a portmanteau of anti- (against) and fascist. Journalist Talia Lavin explained in a recent interview with Salon that the movement is "really just a set of tactics, a mindset and a way of life."

"I'll give you two examples I've heard recently that seemed apt: vegetarianism and birdwatching," Lavin said. "Antifa is the same: It's a movement and a set of principles you can adopt in your life."

In an email, a Trump campaign official told Salon that not only is the upside-down triangle an emoji, it is also used on the New York Stock Exchange ticker to denote losses. An independent Salon investigation found that the upside-down red triangle also appears in "yield" traffic signs.

"I don't believe in coincidences when it comes to fascism," Lavin remarked of the campaign's explanations. "This smells to high heaven."

Of those five user-upload stores, four were in Spain, one of them being the design cited in the campaign's tweet.

The fifth was a car magnet sold by a Cafe Press user called MartStore, who has 0 followers, 0 likes and 0 views. Cafe Press removed the car magnet item page about an hour after the Trump campaign sent the email, though Salon preserved a screenshot.

Since deciding last fall that it would not fact-check paid political ads on its platform, Facebook has endured intense backlash for what critics view as a dangerously lax approach to what will likely be the most consequential election season in memory.

CEO Mark Zuckerberg has taken the position that his company does not have the ethical right to tell voters the truth.

"I know many people disagree, but, in general, I don't think it's right for a private company to censor politicians or the news in a democracy," Zuckerberg told Georgetown University students in a virtual speech last October. "And we're not an outlier here — the other major internet platforms and the vast majority of media also run these same ads.

Twitter, however, has banned all political ads, and recently fact-checked and masked Trump's tweets for violating policies.

In March, Facebook pulled Trump campaign ads for sowing misinformation about the 2020 Census. Unlike Twitter, it did nothing when Trump threatened protesters in his "when the looting starts, the shooting starts" post.

But Facebook's action may send another signal to the president. The Department of Justice on Tuesday said it would ask Congress to roll back some of the protections which have shielded social media companies from liability for user-posted content on their platforms, arguing that the platforms need tighter guidelines.

Tech companies, including Facebook, counter that lifting those legal protections would restrict free speech, forcing content moderators to pre-filter user content for any number of possible violations before it gets posted.