Doctors and nurses are your neighbors and friends 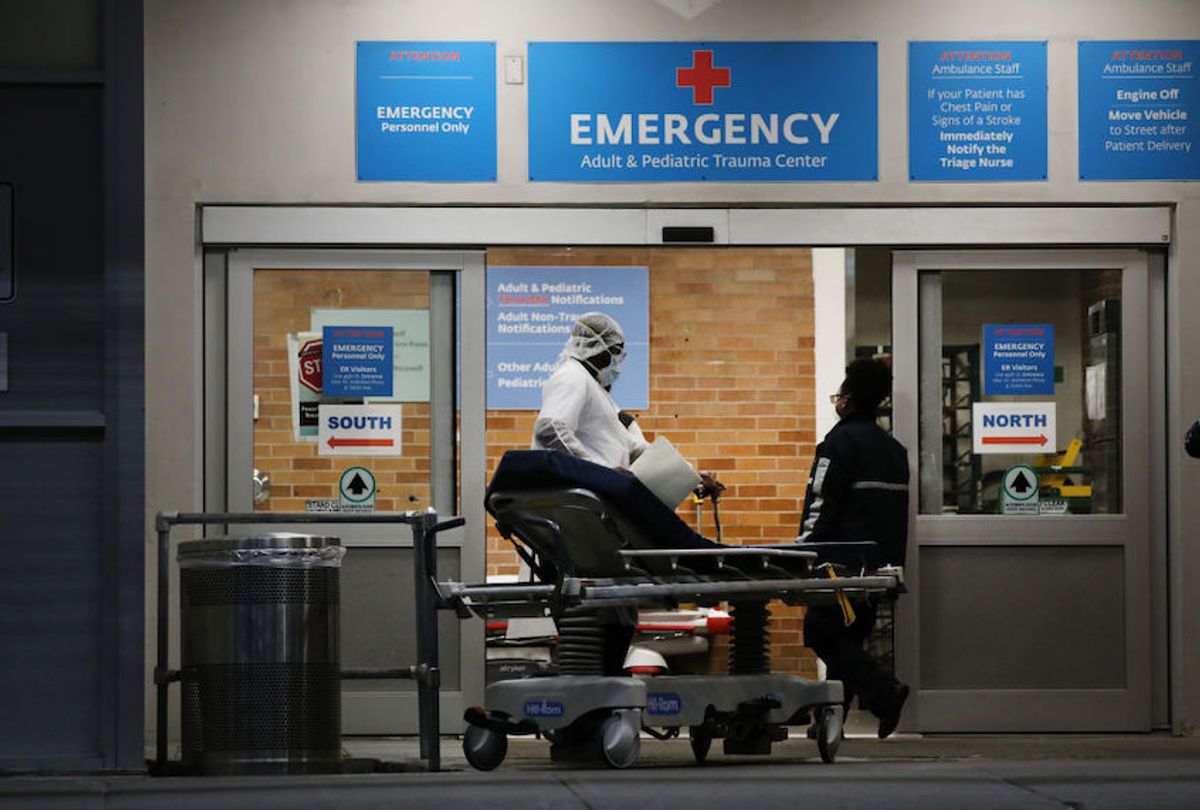 Medical workers walk outside a special coronavirus area at Maimonides Medical Center on May 26, 2020 in the Borough Park neighborhood of the Brooklyn borough of New York City. (Spencer Platt/Getty Images)
--

In Tacurong City, the Philippines, a nurse is surrounded by a mob. They pour bleach on his head. He is blinded, punished by enraged people so frightened of dying that killing and maiming people they associate with death appears to them to be a solution. In Indore, India, where my mother and two aunts went to medical college in India before coming to the U.S. to care for children in a pediatric public health clinic, a mob gathered to throw stones at a team arriving to treat COVID-19, bloodying the doctors, who still returned later to help their patients. And in Charlottesville, a death by suicide. A doctor in charge of an emergency room in New York City, at a hospital that treated hundreds of cases in a city that has seen an unfathomable tempo of deaths, went to her family's home in Virginia to recover from the disease herself. This doctor is now gone.

The word "unfathomable" is too poetic for a coronavirus bulletin. In polemics about COVID-19, it signifies a vast number of deaths, a number without end, a number exceeding predictions. But also: an image of water so deep, each fathom measuring the length of one single tall human body.

Dr. Lorna Breen, the doctor who died by suicide while recovering, might not be counted among the alarmingly high and yet likely undercounted official number of COVID-19 deaths worldwide, already at least 446,000, more than a quarter from the U.S. Every day my email inbox delivers reminders from the Department of Public Health about submitting death certificates, admonishing us not to be so distraught as to forget to record properly the cause of death. "Facilitating mortuary services," the subject of the email. This is what we are expected to do, not to sit and weep.

"Full fathom five" is where a dead parent lies, in Shakespeare's "The Tempest." How many of us will have to fight for space to bury our parents? Behind a Brooklyn hospital, a forklift loads bodies into waiting fleets of trucks.

You. Patient. Person. In contradistinction to "essential health care worker." Thanks for the Nikes. For the pizzas you have sent to hospitals. For the applause.

Your caring is real.

Like all human beings, you also care immeasurably about your own safety, your own lives. The good side of this: the help for your loved ones. The harsher side: the early hoarding of supplies, including masks hospitals need. The glutting on essential groceries, eggs, milk, bottled water, so that empty grocery shelves confronted the more restrained among us.

But what I didn't know, had really never understood before now, was how hard it has been for you to imagine our lives.

We give you hints. Featured in "Scutmonkey," a comic strip about doctors by the anesthesiologist and writer Dr. Michelle Au (who is now running for Georgia State Senate), is a type of resident who walks around with a hatchet buried in his head, lightly bleeding, but not stopping rounds or writing orders and notes or running to codes. During my own residency, I remember my own dentist and medical appointments frequently put off; classmates soldiering through pneumonias, migraines, asthma flares; one of us even putting off the removal of a big shard of glass wedged in the foot because of on-call responsibilities.

Before the pandemic, I didn't talk about any of this. I just resolved to remember. In medical school, I sat in dark lecture halls, tears streaming down my face over the misrepresentations of people I had known and loved. My brother with autism and mental retardation, indirectly the butt of jokes by medical school classmates who used the mnemonic "happy puppets" for patients with a genetic cognitive syndrome, never knowing my family history and how much those jokes would make me afraid for him. My best friend from high school's mother had attempted suicide. Classmates laughing at the self-harming character played by Glenn Close in "Fatal Attraction," the movie used to illustrate "suicide risk" by our lecturer, didn't know they were laughing at my best friend's pain.

The facts we memorized and passed exams on could scarcely do justice to patients' lived, dynamic, complex realities. Real social justice has come from a push toward the democratization of medicine, the empowerment of many other providers and the education of doctors by patients and by patient advocates. Even the substitution of "provider" for "doctor" in our language on health. Being a doctor means belonging to a group of only 950,000 people living in the U.S., out of 329 million. Health care is so much broader than this small group I chose to be part of and have felt privileged to belong to.

But none of us chose to care for infectious patients without being able to wear masks. None of us chose to be warned not to speak to the news media or advocate for our patients, as several doctors, particularly in the fields of surgery and emergency medicine, were in the pandemic's early days.

And as the pandemic spread, it wasn't just doctors' words that were muffled. In three separate incidents in Russia, doctors died under suspicious circumstances after speaking out about their concerns regarding lack of adequate personal protective equipment (PPE). But putting aside potential state- or corporate-sponsored violence, consider the violence of doctors being beaten by police as well as by private citizens, for protesting the lack of PPE in Pakistan, or even for simply reporting to their jobs every day and thus being feared as a source of contagion, in India, Australia, and Mexico (where both doctors and nurses have been targeted with bleach attacks). In Egypt, the tear gas and brutality several doctors met with when they protested the lack of testing availability for health care workers at a #covid-fallen doctor's burial.

There is a difference between being angry at the medical profession's inability to prevent the pandemic and deciding to enact such violence. There is a difference between being frustrated or frightened, and evicting doctors from where they live, saying health care providers pose too great a risk for any community to bear, while at the same demanding our constant work, our selfless help.

Even in settings where applause and thanks have been directed at doctors, there is conscription to consider. Since 1940 there have been multiple invocations in the U.S. not only of a general military draft, but of a medical draft specifically. In 1987 came the initial plan, by Congress, for a Health Care Personnel Delivery System (HCPDS), field tested in 1999 and still ready to be mobilized now. All medical personnel who have ever served in the military can be called back at any time, as physician assistants and doctors were recalled years after they had retired to serve in 1990-91 during the first Gulf War.

In 2004, there were more substantive and serious discussions of a medical draft, for the creation of this kind of registry of all doctors aged 20-44, encompassing 11 core specialties. Given how old some doctors are on average when they finish their training (for neurosurgeons, 35), and given that the average age of all doctors in the U.S. is now 51, it's unlikely that any doctors under age 55 (who comprise 50% of all doctors in the nation) could be exempted from a medical draft, if all 11 specialties were represented.

Then in April came New York Mayor Bill De Blasio's demand, cloaked as exhortation: WE WANT YOU. In a New York Times op-ed he called for doctors to be mobilized like troops, deployed where politicians like him decide to send us, independent of what we choose.

Like water, oil and natural gas, like rare earth elements, doctors are a resource. Scarce. Not to be taken for granted.

On April 27, 2020, the first COVID-19 related suicide by a doctor was reported. Dr. Breen had a warm, inviting smile. She'd supervised other doctors. She was infected, quarantined, recovering. Whether or not we can know for sure if it is true that at least 300 doctors die by suicide each year — reliable statistics are hard to determine, due not only to stigma but also to the financial need of survivors to collect on doctors' life insurance policies — we will grieve these losses forever.

The day I warned my family that COVID-19 positive patients were starting to require treatment in all area hospitals and clinics, even those unconnected with the ICU or pulmonary care, my husband shooed me away from our children. Nearly two months into my self-isolation — confined to one room, separated from the rest of my family — I dreamed one child was in my arms. It was so real, the feel of her. Exactly the way I'd held her when awake. I woke in a panic and had to shout the dreadful question, "Did I touch her by accident? Did I expose her?" (I hadn't; it was a dream.)

None of chose not to be able to touch our families for months on end. None of us chose to leave our homes to protect them. None of us chose to be this alone. The whole point of our training, our stories, our lore, our jokes, our honest effort, our caring, is to "never worry alone."

"Unfathomable" means a space for bodies where the number of bodies is no longer countable by usual means. Is that what the pandemic could still bring in coming months, particularly if society's re-opening is haphazard or unsupported rather than measured, thoughtful, publicly funded and carefully implemented to protect patients, doctors and other providers? Millions infected and not showing signs, but all with the potential of dropping their blood oxygen saturation to the point where one day they are laughing, and the next day they stop breathing? None of us chose to be faced with these terrible questions. What will we choose now?

Chaya Bhuvaneswar is a physician and writer whose debut short story collection, “White Dancing Elephants” (Dzanc Books Story Prize) appeared on over 20 "best of" lists, including Entertainment Weekly, Harper's Bazaar, Vulture, Huffington Post, Elle, Buzz Feed, Vogue, Bustle, The Millions, and which was a finalist for a 2019 PEN/ Robert W. Bingham Debut Fiction Prize. She has received fellowships from MacDowell Colony and Sewanee Writers Workshop, had work selected for the Best Small Fictions anthology, and is at work on more fiction as well as a memoir.