Add these cookbooks by Black authors to your kitchen repertoire

From James Beard winners and "Top Chef" alums, the cookbooks provide a window into history along with recipes 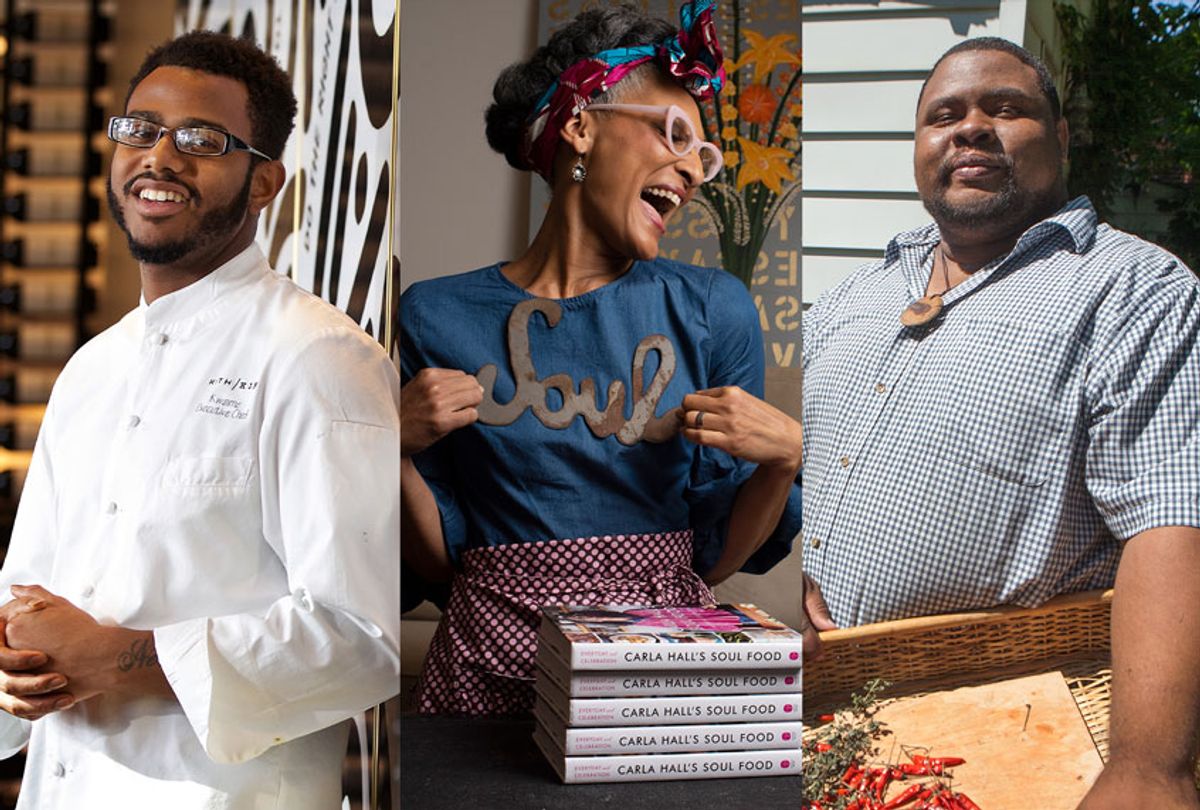 Over the last week, the hashtag #BlackoutBestsellerList has been circulating widely. The campaign, which was started by Amistad publishing, an imprint of Harper Collins, is a social media initiative that encourages readers to buy books by Black authors to push them to the top of the bestsellers list.

In addition to buying fiction, nonfiction and poetry by Black writers, think about diversifying the voices that are included on your cookbook and food memoir shelf.

Food media is an industry notoriously dominated by white chefs and writers. We're starting to see some institutional pushback, like with "Thug Kitchen," a vegan platform run by two white founders, finally changing their problematic name, or the current controversy at "Bon Appetit," after it was revealed that their writers of color weren't paid for their video contributions.

Salon has compiled a list of some of our favorite cookbooks by Black authors to get you started.

Tipton-Martin's latest cookbook, which won this year's James Beard Award for best American cookbook, builds upon the work of her 2016 work (which also won a James Beard award) "The Jemima Code," which highlighted the stories of African American cooks who created much of what we know as American cuisine today.

"After all, if Thomas Jefferson introduced French haute cuisine to this country, who do you think actually cooked it?" she writes.

In "Jubilee," Tipton-Martin uses her extensive research of over 400 African American cookbooks to bring those chefs' recipes and stories into our home kitchens. It's a beautiful exploration of classics like buttermilk fried chicken and sweet potato biscuits, as well as decadent dishes like bourbon and hot apple toddies, and baked ham glazed with champagne.

It celebrates a culinary tradition built on "a foundation of humble sustenance . . . from the luxurious hospitality embraced by the black bourgeoisie to the sturdy but refined cooking that supported community activism by women's social clubs, sorority sisters, and civil rights leaders."

"Notes from a Young Black Chef: A Memoir," Kwame Onwuachi

During a conversation with Salon's D. Watkins, Onwuachi — who is a  former "Top Chef" contestant and the 2019 winner of the James Beard Foundation's Rising Star Chef of the Year Award for his work at Kith and Kin — explained how his illuminating breakout memoir "Notes from a Young Black Chef" came to be.

"I've always been into telling my story in different ways," Onwuachi said. "I did it through food for a long period of time. Then I started doing these speeches to inner city kids — like in New York — just telling them my story. You know, because I looked like them. I also was very young, so I was relatable."

Then Onwuachi was invited to do a talk at the food conference, Bitten.

"And there was a literary agent in the crowd," he said. "And she pulled me aside afterwards and said, 'This story is incredible. Let's do this book.' I'm like, 'Wait a minute, how much is it going to cost me?' Because I had no idea about any of this. She's like — 'I don't get paid until you get paid.'"

That statement marked a departure from Onwuachi's path to that point. He had spent most of his life chasing a dream and a paycheck. After spending some time in Nigeria (to "learn respect" at the behest of his mother), he fell into what he classifies as the "temptation and easy money of the streets" when he returned home.

Through food, however, he broke free, going on to open, and quickly close, one of the most talked-about restaurants in America. Along his journey into the world of restaurant ownership, he found out just how unwelcoming fine dining can be for people of color — though his love of food never dimmed.

In an interview with NPR, "Top Chef" alum and "The Chew" co-host Carla Hall said that while she was raised on soul food, when she began cooking professionally, she moved away from it.

"I didn't realize that it was so much a part of my culture," she said. "I was taught that everything that's other than what I am was great, especially as an African American. And if you're going to be a chef, then the foundation is French cooking. So I was running toward that to validate the things that I was doing, which was being a professional in the culinary world."

That's why "Carla Hall's Everyday and Celebration" is something of a natural return — both to Black culinary tradition and to her personal history. In it, she traces the origins of soul food from Africa and the Caribbean to the American South, landing in Hall's Nashville home. Along the way, she subverts expectations of what constitutes "soul food."

While many may think of soul food as heavy or fat-laden, Hall brings forth recipes that are centered around farm-fresh produce, meat and grains, like Caribbean Smothered Chicken with Coconut, Lime, and Chiles, Roasted Cauliflower with Raisins and Lemon-Pepper Millet and Field Peas with Country Ham.

Each of Jerrelle Guy's recipes tells a story. Her Rosketti cookies reimagine the desserts her mother ate growing up in Guam, while her Plaited Dukkah Bread mimics the braids that were woven into her hair as a child.

Guy grew up in Lantana, Florida, and her tastes were distinctly shaped by her Southern father, immigrant mother and her grandmother, Big Ma (her Orange Peel Pound Cake brings back memories of summer days eating Florida oranges at Big Ma's house). She learned to cook and bake while she was a vegan, so many of her recipes are dairy and egg-free, but are still deeply tied to her unique traditions.

She also focuses on food as an act of self-care.

"As a black woman, we hold so much trauma, and there's not a space where we can release it," Guy told "Healthyish"'s Aliza Abarbaneli. "I do a lot of yeast recipes in this book, and just the simple act of punching dough down is so powerful — it's a therapeutic space."

"The Cooking Gene: A Journey Through African American Culinary History in the Old South," Michael Twitty

"The Cooking Gene" is not just a book about food. It's part memoir, part genealogical survey, part history of American slavery — all of which can be explored through the lens of a seemingly simple question, "Who owns Southern food?"

Through this book, Twitty – who can be seen in Padma Lakshmi's new Hulu series "Taste the Nation" – takes readers from the tobacco and rice farms of colonial times to the Civil War battlefields of Virginia. Along the way, he sifts through stories, recipes and genetic tests as a way to trace his own history far beyond the eight generations that carry documents. He travels to the synagogues in Alabama to Black-owned organic farms in Georgia.

As Dr. Henry Louis Gates, host of PBS' "Many Rivers to Cross and Finding Your Roots," said, "Slavery made the world of our ancestors incredibly remote to us. Thankfully, the work of Michael W. Twitty helps restore our awareness of their struggles and successes bite by bite, giving us a true taste of the past."