Trump heads to Arizona to brag about a nonexistent wall, ignore the worsening pandemic and save a doomed senator 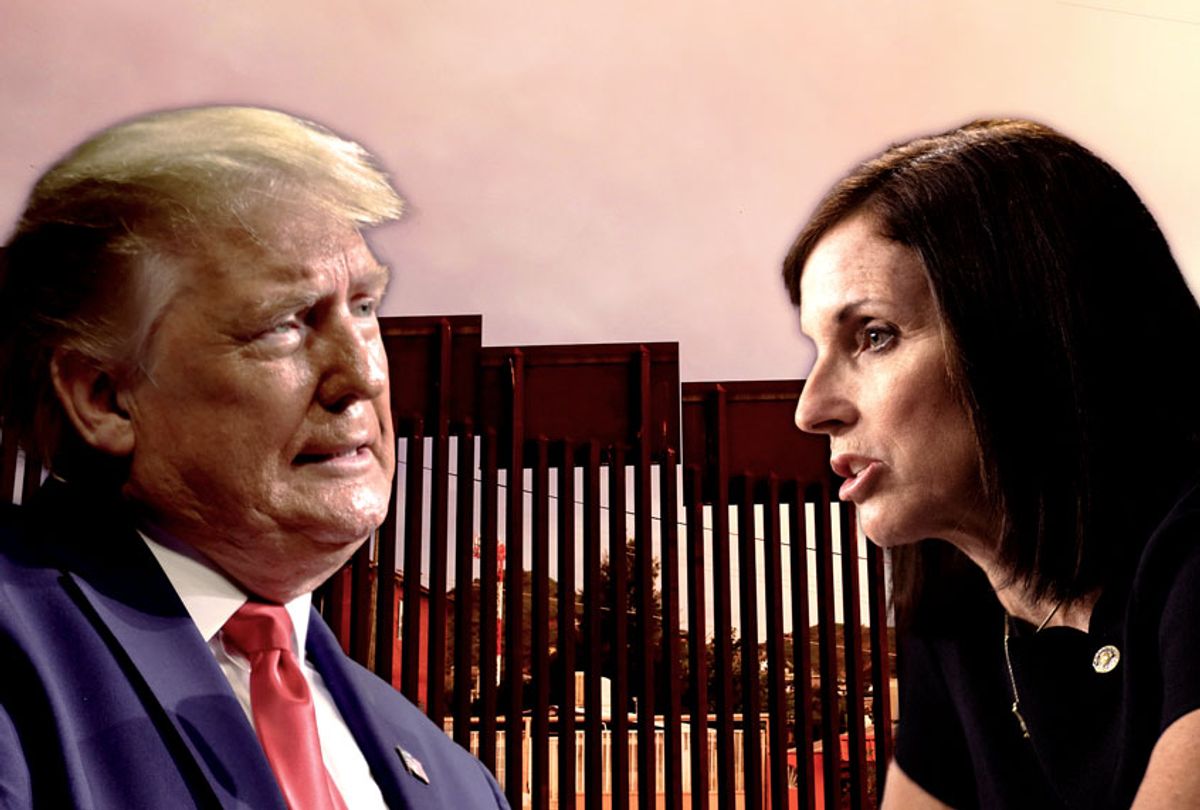 After his debacle in Tulsa, a huge failure with an abysmal turnout and what may still have been a super-spreader event for a deadly virus, Donald Trump needs to set low expectations. Instead, he is back out on the campaign trail Tuesday, making his third trip in five months to Arizona — a state that on Monday reported another record day for COVID-19 hospitalizations — to tout what he calls a major milestone on the long road to achieve his No. 1 campaign promise, building a "big, beautiful wall" on the U.S.-Mexico border. Despite what Trump celebrated as the "212th plus mile of completion" in a Monday tweet complaining about Fox News' coverage of his failed border wall, what the president won't admit on his premature victory lap is that there has still only been three miles of new border construction since he took office.

Trump's latest trip to Arizona succinctly illustrates the current state of his failed presidency. His biggest campaign promise is a bust and the coronavirus keeps spreading in a state that seems to have bungled the pandemic nearly as badly as the federal government.

The president is set to first visit a portion of the border in Yuma County, where new coronavirus cases climbed by more than 100 once again on Monday, before heading to a Phoenix megachurch for an indoor rally with youthful supporters. He'll be joined at both stops by Arizona's Republican Gov. Doug Ducey, who polled as the lowest-ranked executive for his response to the pandemic after he issued an executive order preventing municipalities in the state from imposing stay-at-home orders back in April. Ducey's own statewide restrictions expired in mid-May and Arizona now appears to be among the worst places nationwide for COVID-19 spread. On Sunday, the state surpassed 50,000 coronavirus cases.

Around 1,992 hospitalizations among positive or suspected COVID-19 patients were reported on Sunday, the highest recorded since April 8, according to the latest figures from the Arizona Department of Health Services (ADHS). Inpatient beds, ICU beds, ventilators in use and emergency department visits also hit their highest-ever numbers Sunday, according to ADHS. As of Sunday, 82% of current inpatient beds and 84% of ICU beds were in use.

For his part, Ducey, like Trump, has shrugged off the glaring red flags and partially lied about his administration's testing capabilities.

"Now, if you want a test, get a test. We've got a test available. We've got over 120-plus locations," said Ducey at his June 11 news conference. But Arizona currently ranks 40th in the nation in per capita testing according to ongoing research conducted by Johns Hopkins University.

At a drive-through testing location in a predominately Hispanic community of southwest Phoenix, people were forced to wait in line as long as 13 hours in the hot sun on Saturday. Hundreds of people sat in the heat with no access to bathrooms, food or water, and many did not receive tests in an area with close to the highest rates of confirmed infections in Arizona's largest city. It's another microcosm of how nationwide marginalized communities bear the brunt of this deadly disease due to public health negligence. Reports suggest that Arizona testing corporations are now rationing test kits as Trump and Republicans in Congress delay further federal investment.

As in much of the nation, patients between the ages of 20 and 44 account for the fastest growth in cases in the Grand Canyon State, with that age group now including more than twice the cases of any other. So naturally, Trump's second event is billed as an address to America's youth. Ahead of Trump's arrival, Maricopa County, which with 4.5 million people has more than half the state's population, issued a mask mandate on Friday. Days later, the pastor of the megachurch where Trump will speak claimed in a now-deleted Facebook page that special air conditioning units could virtually eliminate the coronavirus in a matter of minutes. "When you come into our auditorium, 99% of COVID is gone, killed," said Luke Barnett, senior pastor of Dream City Church.

That sums up where we are in the final few months before Donald Trump's final political test. Surrounded by top elected officials and cranks alike, Trump is leading an ever-evaporating minority and trying to sell objective failure as success.

A solid majority of polled Americans still do not support the president's effort to build a border wall, even as support for allowing refugees from Central America — a group Trump has repeatedly demonized as violent criminals — to enter the country has ticked up among all voter groups, including Republicans and independents. Additionally, the number of people supporting increased immigration has grown from 21% to a record-high of 30% since Trump took office. That increase also includes Republican voters, who have gone from 11% in favor of increasing immigration in 2016 to 16% as of late last year.

Rejected by even his most ardent voters in a deeply red state and the conservative-leaning highest court of the land on several major cases in recent days, Trump's only refuge outside the White House bunker and Mar-a-Lago appears to be with Republican sycophants like Arizona Sen. Martha McSally, who faces a bleak election battle this fall against former astronaut Mark Kelly — husband of former Rep. Gabby Giffords, who was critically injured in a 2011 assassination attempt — after fully hitching her wagon to the derailed Trump train.

Trump won Arizona by just three points in 2016, the closest margin of victory in the state since Bill Clinton became the last Democratic presidential candidate to win it in 1992. Only 73% of Arizona Republicans backed McSally in a Fox News poll released earlier this month. Indeed, McSally may accomplish the rare feat of losing two Senate elections two years apart; after being narrowly defeated by Democrat Kyrsten Sinema in 2018, she was appointed by Ducey to the seat previously held by the late Sen. John McCain. Trump would like to rescue her, but his magic appears to be fading.