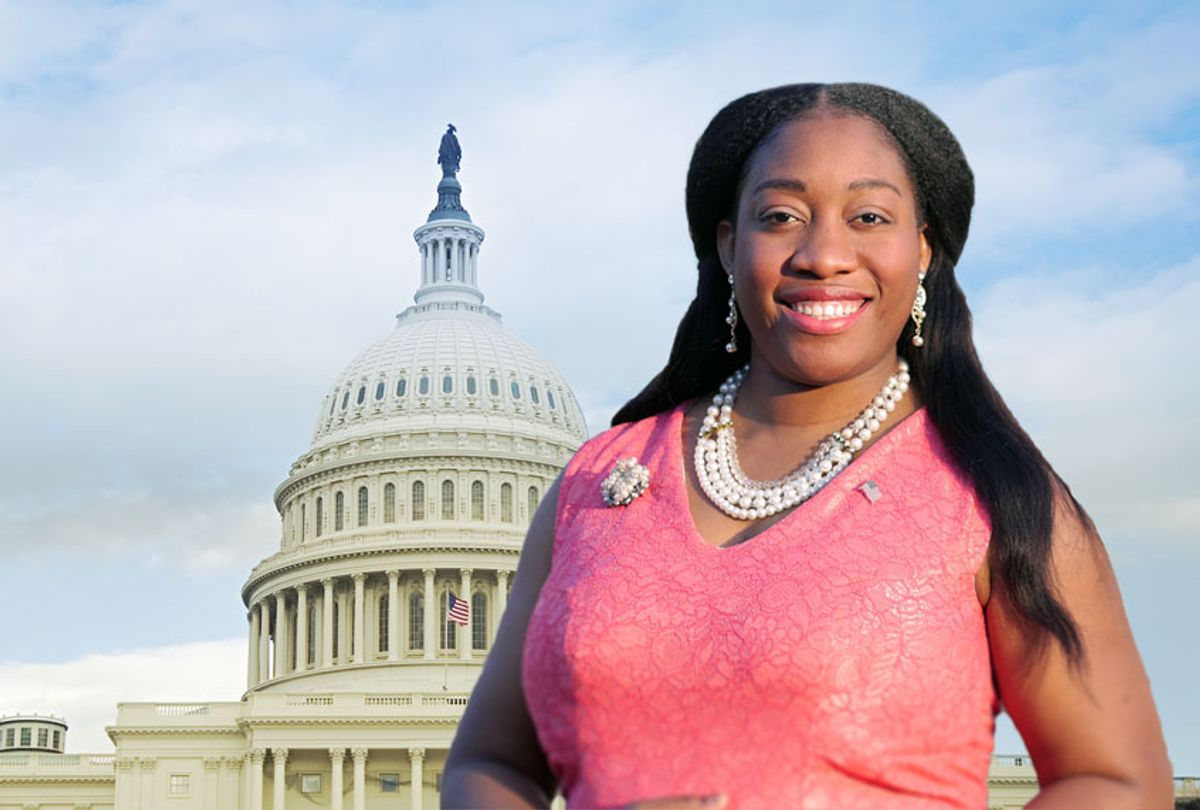 A Republican candidate for the U.S. House of Representatives from Missouri published a 23-page report which falsely claims to show that George Floyd's killing was a "deepfake" hoax.

Winnie Heartstrong, who reportedly has a good chance of winning the Republican Party's nomination in August to challenge incumbent Rep. Lacy Clay, D-Mo., has repeatedly claimed on Twitter that Floyd's death in the custody of Minneapolis police was faked. A May video featuring Heartstrong claiming that "George Floyd is alive" was widely shared among far-right conspiracy theorists.

But Heartstrong went a step further last week, publishing a lengthy report filled with conspiracy theories about the killing. Heartstrong now claims that Floyd actually died years ago, and the video showing his death was a "deepfake." A tweet linking to the report appears to have been removed by Twitter.

"We conclude that no one in the video is really one person, but rather they are all digital composites of two or more real people to form completely new digital persons using deepfake technology," Heartstrong said in the report.

Heartstrong even suggested that comedian Ben Bailey, the host of the game show "Cash Cab," was somehow depicted as former police officer Derek Chauvin, who has been charged with second-degree murder.

"Citizen investigators have suggested that the 'officer Chauvin' who appears in the arrest video bears a striking resemblance to the actor and comedian Benjamin Ray Bailey, who features in Cash Cab," she wrote.

Heartstrong claimed that the research was compiled by a group of "investigators," who want a federal investigation into the video.

"We urge President Trump to open an investigation into these claims to help resolve the issue of deepfake technology once and for all," she wrote.

The report was first flagged by The Daily Beast's Will Sommer, who noted that the "Cash Cab" conspiracy theory "has caught on with some elements of the pro-Trump QAnon movement, based solely on the idea that Chauvin looks somewhat like Bailey."

Heartstrong did not respond to Sommer's questions and instead referred him to the May video.

"You lure in a homeless man, you give him some drugs laced with poison and you kill him," Heartstrong said in the video. "Black America, you all need to wake up, and stop being so emotional."

Heartstrong has a strong shot at winning the nomination, facing off against comedian and podcaster Anthony Rogers, who recently drew an endorsement from convicted longtime Trump adviser Roger Stone. Rogers recently came under fire after a local newspaper resurfaced his "offensive posts," including a 2014 post which said Michael Brown, the unarmed black teenager killed by police in Ferguson, was doing "hood rat sh*t."

Heartstrong has also claimed that Brown's killing has been "debunked."

"Ferguson, Missouri is in my district (MO-01) and is the birthplace of Black Lives Matter. Six years later, the facts surrounding the police shooting of Michael Brown have been investigated, debunked, and revised," she tweeted, along with a video suggesting the shooting was justified by Prager University, which is not an actual university.

The Southern Poverty Law Center notes that many of the nonprofit's videos "function as dog whistles to the extreme right."

Before moving to Missouri, Heartstrong previously unsuccessfully ran for the Maryland House of Delegates, receiving only 5% of the vote in that race.

Regardless of which Republican wins, Clay is widely expected to easily keep the seat he has held for nearly two decades.

"They're going to take the ass-whupping, so it don't make no difference," St. Louis political analyst Mike Jones told The Daily Beast. "And the lucky one might be the one that lost [the primary]."