So Trump wants to slow down the national testing program — problem is, there isn't one

Trump definitely wasn't joking about wanting to "slow the testing down." But he's never wanted testing at all 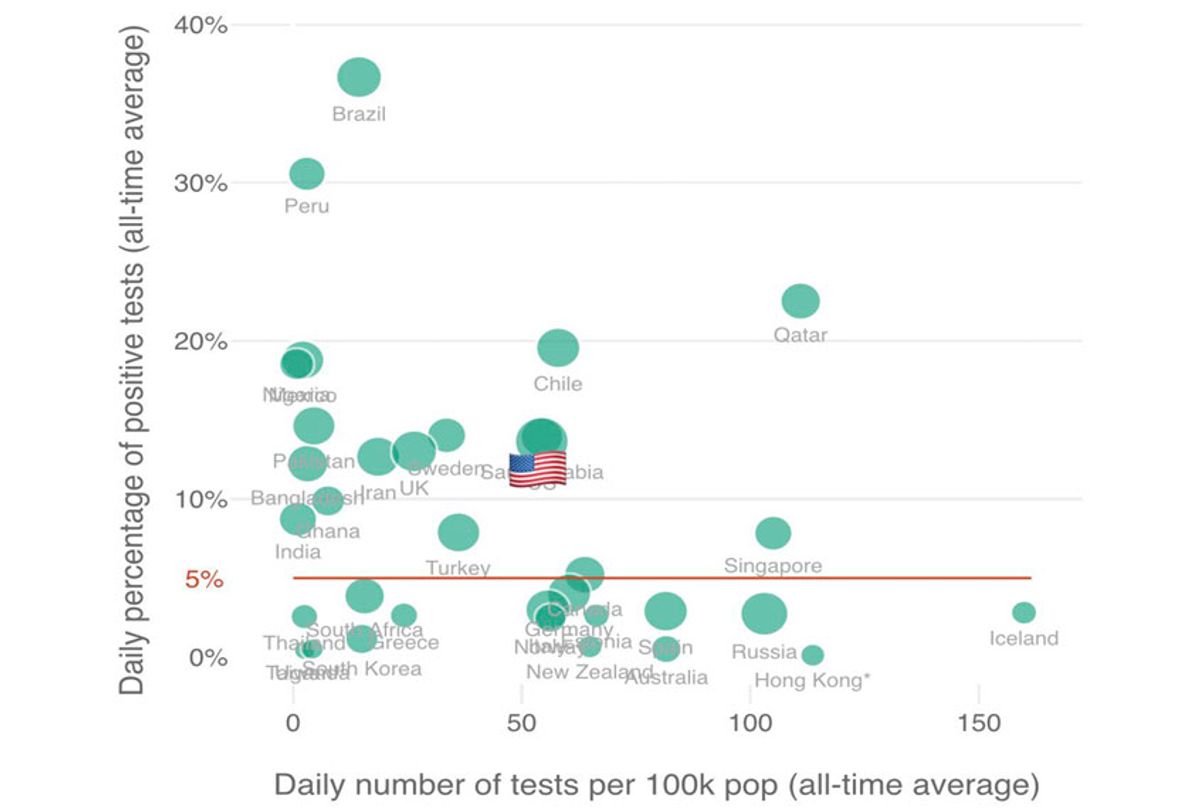 Donald Trump wasn't joking when he complained the other night that increased testing for the coronavirus was resulting in more reported cases.

Nor was he joking when he said that he told "his people" to "slow the testing down, please."

The only question is whether he actually did it, or just thought about doing it.

Either way, however, the real outrage is that "his people" couldn't necessarily slow things down if he asked them. That's because, in defiance of public health experts, Trump has repeatedly refused to support anything close to an actual national testing program.

He has consistently refused to launch a massive federal effort to develop supply-chain capacity to test more Americans, although that is desperately needed, and only the federal government is capable of doing what's required.

His antipathy toward testing — indeed, toward anything that makes "his" numbers look worse — has been clear since the beginning of the pandemic. He famously said in May, "In a way, by doing all this testing we make ourselves look bad."

Trump's argument happens to be garbage, as a global health expert pointed out:

Indeed, when it comes to the virus — as with so many other things — Trump's Washington is doing basically none of the things we need it to do.

In the absence of a national approach, states have been forced to take the lead, haphazardly and inconsistently, and with no ability to affect the major supply chain issues that continue to slow testing initiatives around the country, according to a survey from the American Association for Clinical Chemistry.

It is despite Trump, not because of him, that about 500,000 Americans a day are getting tested now. That's a big improvement over two months ago, but still far short of the 5 to 20 million tests a day that some experts think is necessary to detect, track and isolate infected people and prevent repeated new outbreaks.

Trump's comment was tragic in its symbolism more than in its effect. It only further exposed his complete lack of a plan, other than wishful thinking, for an end to the pandemic here.

Rep. Sean Patrick Maloney, D-N.Y., offered up a sobering summary of the federal response earlier this month, in an interview with the Hill's Steve Clemons:

You've got 115,000 Americans dead and 40 million people out of work, you know? How's it going? The fact is is that our national testing program was a disgrace. I don't care what the White House says, and if you look at every country on Earth that has got a handle on the virus, it's because they had a national testing program in place early, aggressively. They did contact tracing and containment. And we have never gotten our act together on that at the federal level. And we are paying a terrible price for it. And we will never get those days back. We will never be able to put that suffering back together because we paid that price already and at the state level we're now testing 50,000 people a day, and that's great. We're doing all the things necessary to win. But we didn't have to be. We didn't have to be hurt this badly and I'm sorry. There's a lot of blame to go around, but the administration will never convince me that they handled this properly.

That's not to say that Trump is incapable of making the situation even worse. Conceivably, "his people" could pressure manufacturers to slow operations. And, notably, two Senate Democrats are complaining that the Department of Health and Human Services is still sitting on $8 billion of the $25 billion it was given to spend on testing and tracing.

As Politico reported, White House dissimulator Kayleigh McEnany said Trump's comment was made "in jest." But that's what Trump's people say when he says something that's true, or that he really feels — as CNN's Daniel Dale so effectively pointed out.

Joe St. George of Scripps Television asked Trump on Monday if he had really given the slowdown order, and Trump simply repeated his anti-testing argument.

"If we did slow it down, we wouldn't show nearly as many cases," Trump said. "If it did slow down, frankly, I think we're way ahead of ourselves, if you wanna know the truth. We've done too good of a job."

Nobody on the planet thinks Donald Trump has done "too good of a job," except him.