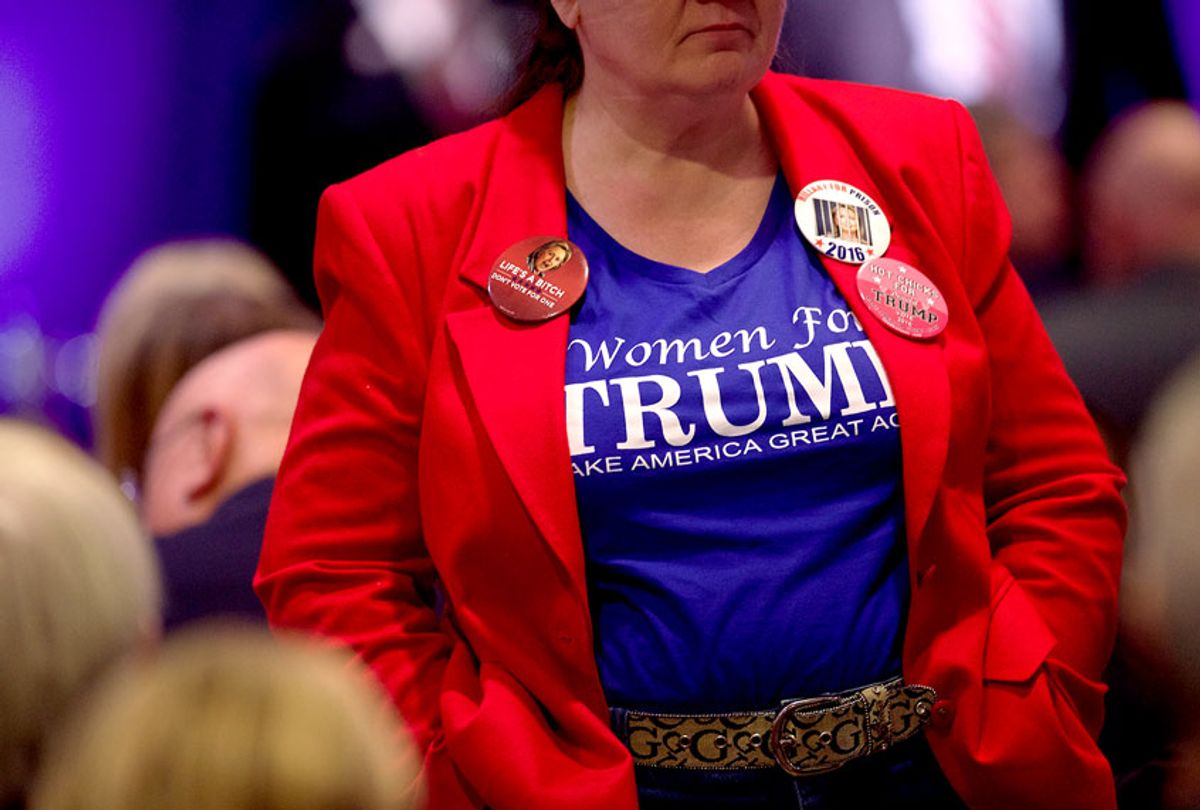 A supporter wears a "Women for Trump" shirt before the Republican Presidential nominee holds an event at the Eisenhower Hotel and Conference Center October 22, 2016 in Gettysburg, Pennsylvania. (Mark Makela/Getty Images)
--

President Trump had his spirits lifted a little bit on Tuesday when he visited his beloved unfinished border wall and held an event in a megachurch filled with 3,000 cheering fans demonstrating their devotion in Phoenix, one of the most intense COVID-19 hotspots in the country. Virtually none of the crowd wore masks and they sat together, shoulder to shoulder, for hours, screaming and laughing, sharing their aerosols with abandon.

Trump was no doubt reassured by the spectacle. They love him so much they are ready to die for him.

He droned on for 70 minutes or so, hitting most of his greatest hits and complaining about mail-in voting, saying this election will be the most corrupt in history. But the main thrust of his message was that he had directed the best pandemic response of any leader in the world and that the U.S. is back, baby!

The "numbers" he was referring to there were economic statistics. But as you know, he's been complaining about the COVID case numbers for months as well, even insisting earlier this week that if we didn't do all this testing we wouldn't have so many cases. He appears to have a mental block on this subject and is simply unable to comprehend that if we weren't testing we would still have the cases. Apparently no one has asked him if he thinks fewer tests would result in fewer deaths, but it would certainly be interesting to know the answer.

In fact, those numbers are intertwined, although Trump doesn't seem to understand exactly how. He persists in his delusion that if we just "open up" then pent-up demand will result in a massive economic revival just in time for the election. He believes we must all buck up and ignore the ongoing stress, sickness and death we've been experiencing for more than four months now and just go back to normal. It must have cheered him to no end to see all those adoring fans doing just that.

His demand that the country open up is inexorably leading to unprecedented economic distress because, as much as he would like to pretend the crisis isn't happening, it is. The economy is going to suffer far longer than necessary because of Trump's unwillingness to treat the pandemic with the same seriousness as the leaders of many countries that actually are finding a way back from this. He is the instrument of his own failure with this magical thinking. But then that's the story of his life.

As Trump was jetting off for his latest rally, Congress was convening a hearing with four of the government's top health experts, CDC director Dr. Robert Redfield, infectious-disease specialist Dr. Anthony Fauci, FDA director Dr. Stephen Hahn and HHS Assistant Secretary for Health Adm. Brett Giroir, also a physician. These four medical doctors were not feeling the magic. In fact, their message was clear: it's not over and it's not looking good.

Fauci described a "disturbing surge" of coronavirus infections that he found very "troublesome." He said, "The next couple of weeks are going to be critical in our ability to address those surges we are seeing in Florida, Texas, Arizona and other states" and begged people to stay home as much as possible and to wear masks if they must go out. He seemed to be genuinely worried.

He isn't alone. Texas Gov. Greg Abbott, a Republican who ostentatiously opened up his state early and arrogantly proclaimed, "We've got this," seemed more than a bit nervous on Tuesday. COVID patients may be close to overloading the state's hospital capacity after hospitalizations jumped from an average of 1,600 a day to 3,200 a day.

"Because the spread is so rampant right now, there is never a reason for you to have to leave your home unless you do need to go out," he said. "The safest place for you is at your home."

"There remain a lot of people in the state of Texas who think the spread of Covid-19 is really not a challenge," said Mr. Abbott, who has resisted the idea of another lockdown.

That is a far cry from a couple of months ago when Lt. Gov. Dan Patrick, even more of a true-believer Trumper than Abbott, appeared on Tucker Carlson's Fox News show to say the economy should completely reopen because "there are more important things than living."

Abbott wasn't the only one sounding the alarm. That's playing out around the country in a number of states with Republican governors that are seeing spikes in cases, hospitalizations and deaths since they began to reopen in May. It's not clear how this is affecting these governors' approval ratings but the president's are getting worse. His head-in-the-sand strategy is not selling well. The first New York Times/Siena College general-election poll, released Wednesday, shows him trailing Joe Biden by 14 points.

According to the Washington Post, the campaign is getting increasingly worried:

At the core of the erosion is a dramatic abandonment of Trump by key demographic groups. The rebellion by college-educated women against the president in 2018, which gave Democrats control of the U.S. House via victories in the suburbs, has begun to register more deeply in recent months among non-college-educated and older women.

Trump's weekend rally in Tulsa, which focused more on his personal grievances than on solutions to America's pressing problems, reinforced the sentiments that political strategists say have driven women to desert him.

It's understandable that women, many of whom are overtaxed in this crisis with jobs, full-time child care and vulnerable elderly parents, would be specifically turned off by Trump's self-centered obsession with his "numbers" and the single-minded focus on opening up the economy. Most people understand it isn't safe to resume normal life while a dangerous virus is stalking the population. They want serious leadership, not bluster and posturing.

"These women really describe their lives as filled with exhausting chaos," said Celinda Lake, a Democratic pollster who is advising the Biden campaign and who traced the recent shifts to Trump's pandemic response. "It is something new every day. And they want someone who will lead them through this, not someone who will make it more chaotic."

Trump is the ultimate chaos agent, lurching from one catastrophe to another, unable to discipline himself in even the smallest ways. That may have worked well enough for him when we were dealing with political battles and palace intrigue, all of which was important but didn't bear directly on the everyday lives of Americans. The coronavirus crisis does and it's brought home the fact that his narcissism and emotional incontinence makes everything worse. He is a walking disaster, and that's the last man you want in charge during a real crisis.