Donald Trump thinks coronavirus testing is a plot to destroy him — and no, he's not kidding 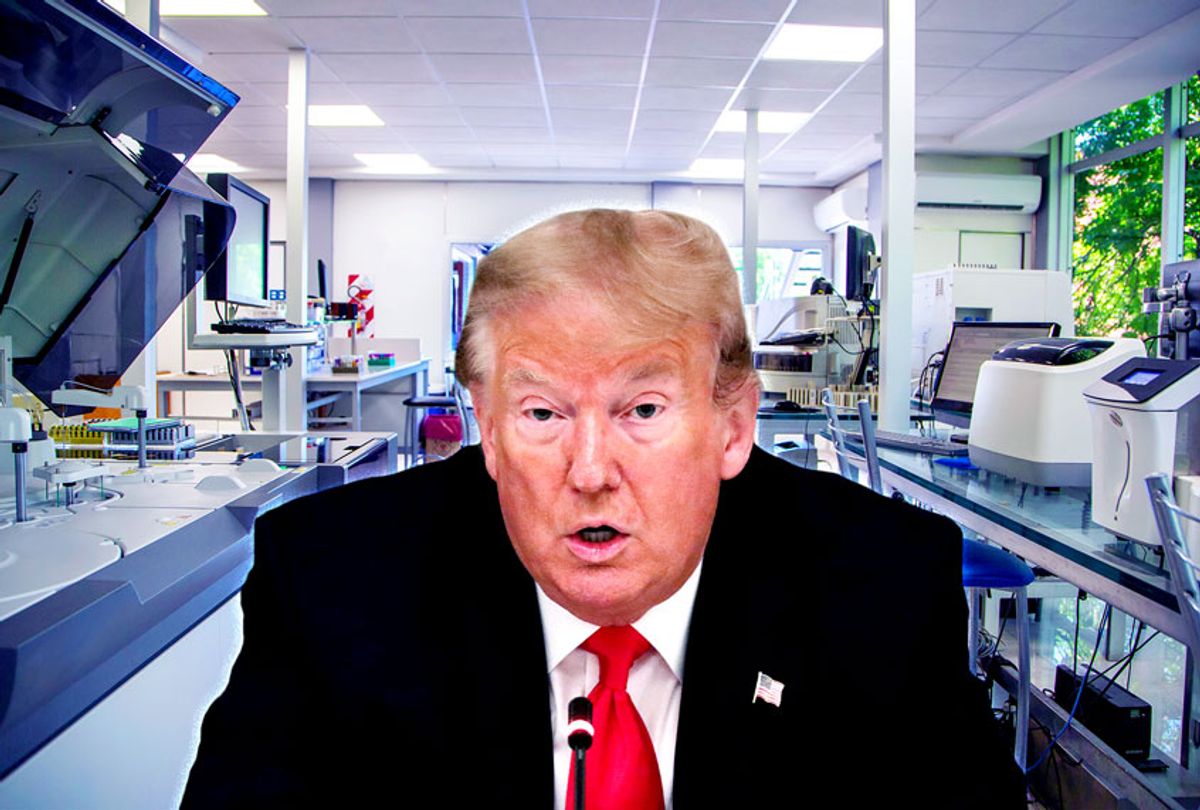 At his Tulsa rally on Saturday, Donald Trump may have failed to draw the big crowd or the violent protests he desired, but he did enter a new phase in his efforts to make the coronavirus pandemic disappear through the magical power of lying about it.

During Trump's disjointed speech, he mentioned that the "bad part" about testing people for the virus lies in the fact that "you're going to find more cases."

"So I said to my people, slow the testing down please," he added, protesting that they "test and they test" and suggesting that cases that might otherwise be written off as "the sniffles" then get classified as COVID-19.

This is far from the first time that Trump has publicly speculated about concealing the extent of the pandemic by clamping down on testing. Indeed, there's every reason to believe that the glacial pace of testing in the U.S. is a direct reflection of the president's wishes.

As Sen. Chris Murphy, a Connecticut Democrat, observed the last time Trump whined about testing, "The lack of tests isn't accidental. It's by design."

Despite this history, the White House made a show of playing Trump's comment as a joke, with one administration official telling CNN that Trump was "obviously kidding" and another saying it was "tongue in cheek."

But Trump doesn't like it when his own people undermine his heartfelt desire to make the coronavirus go away through pure denialism, and so on Tuesday morning he laid down the law on Twitter: No, he's not kidding, and he really does think he can disappear the virus by making sure people can't get tested for it.

Cases are going up in the U.S. because we are testing far more than any other country, and ever expanding. With smaller testing we would show fewer cases!

When asked about this later Tuesday morning, Trump said, "I don't kid" when he says he wants "smaller testing."

So, no, this is not a joke. Trump is a lifelong con man who has found himself in a position where, thanks to the weirdness of American politics, he has a rapt audience willing to go along with whatever lies he tells, no matter how outrageous. He's drunk on this power, and constantly throws out loyalty tests to see how much garbage his people will swallow on command.

This is the man who spent his first day as president demanding that his staff and followers ignore the evidence of their own eyes and pretend to believe that his inauguration crowd was bigger than Barack Obama's. It's safe to say Trump is fully committed to the idea that he has almost god-like powers to change reality simply by lying his ass off about it.

Indeed, the Tulsa rally was, in many ways, a product of Trump's confidence in his own will-to-power ability to distort reality through lying.

The rally was "supposed to reinforce and embody the notion that Trump has defeated the coronavirus," as Greg Sargent of the Washington Post wrote on Monday. By packing an indoor arena with people, shoulder to shoulder and free of masks, Trump clearly meant to create a visual rebuke to the idea that the coronavirus is a real threat.

In reality, what happened was that the two-thirds-empty arena served as memorable visual testimony that not only is the coronavirus real, but that even Trump voters have a limit to how many lies they'll believe to prove their loyalty. It turns out that while most of Trump's supporters are happy to echo his nonsense about "fake news," many will draw the line at risking a potentially deadly disease in order to play along with his desire to prove that he can remake reality.

Trump, however, appears undeterred from his genius plan to "defeat" the coronavirus by endlessly lying about it and getting his base voters to agree that this disease is more of a hoax — or even a dastardly liberal plot — than an actual threat. Trump may not be religious, but his faith in his own ability to get his followers to go along with any lie, no matter how deadly or preposterous, is unlimited.

In this mission, Trump is getting a lot of help from right-wing media. As a Media Matters report from last week shows, after a brief bout of taking the virus seriously, Fox News and other conservative media have largely recommitted to the claim that there's a conspiracy between Democrats, the media and public health officials to exaggerate "the danger from the virus in order to damage President Donald Trump's political standing."

On Fox News recently, Laura Ingraham ranted that the "medical deep state" is churning out "alarmist COVID drivel" in order to damage Trump.

Her Fox News primetime colleague Tucker Carlson, meanwhile is telling viewers that the media is "lying to us about the coronavirus and our response to it" and "acting as press agents for power-drunk Democratic politicians."

Rush Limbaugh took this a step further on his radio show, declaring, "You can't believe the virus numbers" and arguing that the press is lying about the 2.3 million people infected and the 120,000-plus deaths as part of a mission to "destroy Donald Trump, destroy Trump voters, destroy the Republican Party, re-elect Democrats."

Out in right-wing land, rumors are flying that hospitals are being paid off by some mysterious benefactors to falsify coronavirus tests. Videos are circulating on social media full of claims that virus deaths are being faked. A veritable cottage industry of fake "experts" has developed to feed conservative conspiracy theories painting the coronavirus as an anti-Trump hoax.

It remains unclear how much this onslaught of pressure on Republican voters to pretend the pandemic isn't real is working. About 83% of Republican voters say they approve of Trump's response, but that's a low-stakes show of loyalty to Trump. Polling about how Republicans perceive the virus has dropped off in recent weeks, as Black Lives Matter protests took over the headlines, but in late May, there was significant evidence that Republican voters were less inclined to say they took the virus seriously than Democratic voters.

But as the low turnout in Tulsa on Saturday suggested, there's evidence that while plenty of Republican voters may be happy to display tribal loyalty by telling a pollster over the phone that they're not afraid of the virus, they're still eager to avoid large crowds in indoor spaces. Only time will tell how much Trump's propaganda blitz is working on them.

One thing, however, is certain: Trump, ever the terminal narcissist, has embraced the idea that this global public health crisis is nothing more than a political plot to destroy him. Now that he's suffered a major humiliation after the debacle in Tulsa, he is doubling down on his anger over the coronavirus tests.

For Trump, of course, the problem is not that thousands of people are getting sick and dying. In his eyes, it's only a problem if the public finds out about it. As Election Day gets closer, Trump is convinced that his last chance of victory is to make the viral pandemic disappear beneath a cascade of outright lies.