Trump was hoping for a "wild evening" of violence at Tulsa rally he could blame on protesters. It didn't work 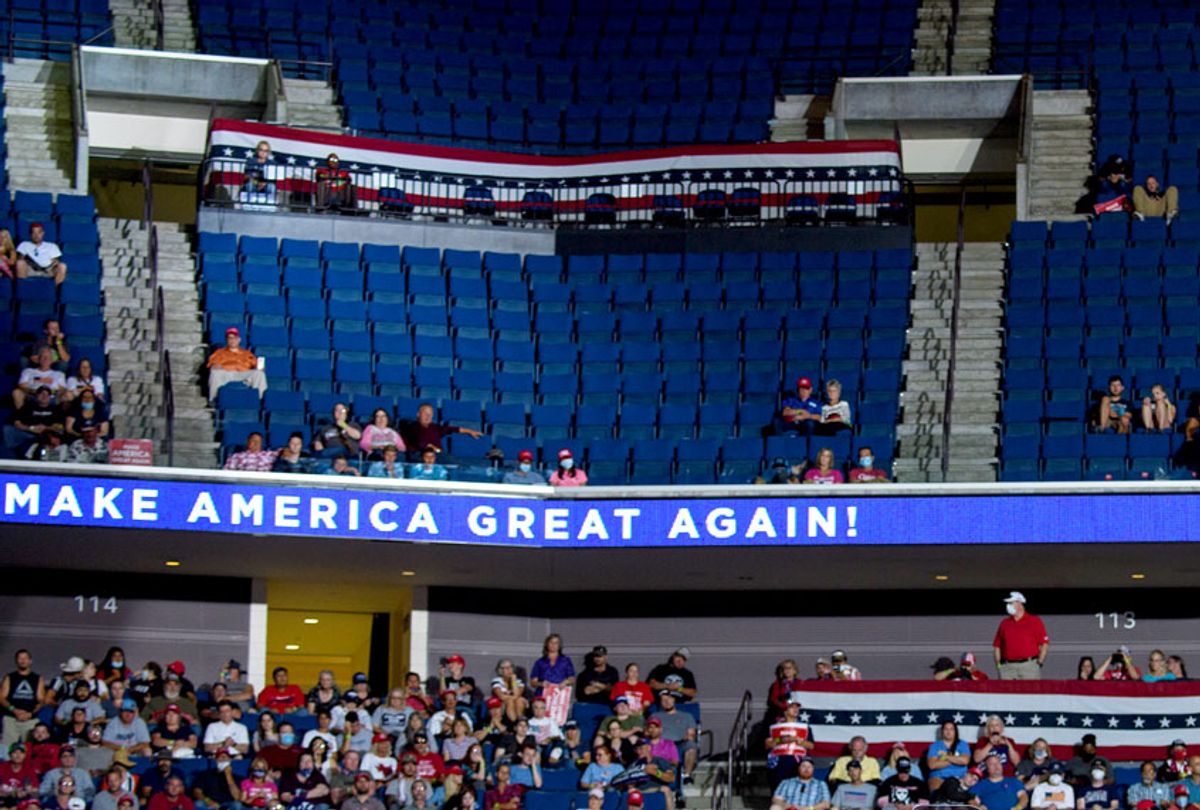 The upper section of the arena is seen partially empty as US President Donald Trump speaks during a campaign rally at the BOK Center on June 20, 2020 in Tulsa, Oklahoma. (NICHOLAS KAMM/AFP via Getty Images)
--

Don't even bother trying to resist the pleasures of Donald Trump's epic face-plant in Tulsa over the weekend. One of the oldest and purest forms of humor is laughing at a buffoon whose exaggerated sense of self-importance conflicts with the evidence provided by reality, a tradition that extends from Dogberry in Shakespeare's "Much Ado About Nothing" to the tone-deaf people who in "American Idol" auditions who believe they sound like Mariah Carey.

And boy howdy, the contrast between reality and expectations set by Trump and his campaign manager, Brad Parscale, could not have been greater. Parscale excitedly touted a million registrations for Trump's Saturday evening rally. Internally, the campaign's more conservative prediction was around 60,000 people — more than three times what the Tulsa arena could hold — but believed as many as 300,000 supporters might turn out.

In the end, the Tulsa fire marshal estimated that about 6,200 people showed up, which is less than one-third of capacity in the BOK Arena in Tulsa can hold. Images of empty seats dominated the coverage, and Twitter folks had a good time meme-ifying Trump's desultory walk of shame back to the White House.

Expect lengthy debate across cable news and social media about what the low turnout means: Does it reflects a real drop in Trump's support, or were his increasingly elderly supporters simply scared off by the coronavirus pandemic and anxiety about an indoor crowd?

But ultimately, what may matter more is not the low turnout inside the arena, but what failed to happen outside on the streets. Trump did everything in his power to provoke a melee outside the rally, including encouraging police to start cracking skulls. Instead, he got a relatively uneventful protest, leaving the headlines to focus instead on what a bust the rally itself was.

It's no exaggeration to say that the Trump campaign's anticipation of violent conflict outside the rally was as important, and probably more important, to their campaign strategy than a packed house inside the rally itself.

The White House hype for what might happen was every bit as as intense as the propaganda blitz about the supposedly huge crowds. Press secretary Kayleigh McEnany veritably swooned with excitement on Friday at the threat of "violent protesters, anarchists, looters" and general "lawlessness" outside the arena.

On Twitter, Trump himself didn't bother to conceal his excitement about the prospect of "protesters, anarchists, agitators, looters or lowlifes who are going to Oklahoma," and gestured at a violent crackdown by saying, "you will not be treated like you have been in New York, Seattle, or Minneapolis."

Police have, in fact, assaulted peaceful protesters in those cities, but Trump clearly believed Tulsa cops would take it to the next level.

Trump also promised a "wild evening" in Oklahoma and told reporters he anticipated a huge crowd of anarchists, agitators and looters. The strategy was pretty clear: Trump hoped to generate images of violent conflict between police and protesters, which he could use to spin a narrative about the "out of control" left and the need for "law and order."

To that end, the Trump campaign did everything they could to maximize the provocation in Tulsa rally, starting with the location. The BOK Center in Tulsa abuts the Greenwood District, a neighborhood that was burned to the ground in the infamous Tulsa race massacre of 1921. To add to the racist provocation, they originally scheduled the rally on June 19, better known as Juneteenth, a holiday celebrating emancipation from slavery that is heavily celebrated in the Greenwood District. In the face of media blowback, the campaign rescheduled the rally by one day and pretended it was all a coincidence, but initial messaging from both the campaign and the White House made it clear they understood the significance of both the date and location.

Taken together, it's clear what Trump's campaign hoped would happen: A large protest under the Black Lives Matter banner would show up outside of the rally, and the cops, encouraged by Trump, would unleash violence on the crowd and create a chaos. Trump, aided by Fox News, could use those images to fear-monger about "looters," "rioters" and "anarchists" — no doubt blaming the whole thing on antifa — thereby reeling in suburban white voters that the Trump campaign fears is souring on a president who, not too long ago, suggested it might be cool to try injecting household cleaners as a treatment for COVID-19.

As Alex Isenstadt of Politico wrote in his Sunday post-mortem on the failed rally, "Trump advisers have long been convinced that if the race is a referendum on him," then Trump, who is increasingly embarrassing his own supporters, will lose.

Instead, the campaign would like to make the election about something else, and clearly Trump and many of his close advisers believe that "something else" can be about convincing broad swaths of white America to feel angry and fearful about the Black Lives Matter protests. Indeed, this rally was conceived as something of a rebuttal to the protests that have swept the nation in the wake of a Memorial Day video showing a Minneapolis police officer crushing the life out of George Floyd. Fox News pundits and Trump himself have explicitly contrasted the Tulsa rally with the weeks of protest.

But Trump's efforts to demonize the Black Lives Matter movement, through a combination of provocation and police brutality, have completely backfired so far. There was no violent images to exploit in Tulsa, and virtually no arrests to claim as evidence for "rioting." The one arrest that made the headlines — of a teacher at a Catholic school, whose offense seems to have been wearing a T-shirt that read "I Can't Breathe" — only made the protesters look more sympathetic.

What makes Trump's miscalculation even more mind-boggling is that his campaign apparently didn't learn its lesson from a similarly failed stunt earlier this month outside of the White House. On June 1, Trump's team infamously ordered law enforcement to tear-gas peaceful protesters so the president could stage a BS photo-op outside St. John's Episcopal Church in Lafayette Square.

It was clear both from the way the tear-gassing was organized — during a Trump speech in the Rose Garden — and from subsequent White House messaging that the campaign hoped the images of gas-clouded streets and cops in riot gear would lead the public to blame the protesters and see Trump as a hero.

Instead, what happened was entirely the opposite: Journalists correctly reported that it was a police assault on peaceful protesters and the Trump White House, not the protesters, got the blame. Trump ended up looking even more like a #BunkerBoy coward for being so fearful of a peaceful protest.

But Trump seems undeterred by his own failures to demonize the protesters. He clearly believes that if he keeps pulling these stunts, he will eventually succeed in shifting the narrative of this election away from his own failures toward the racist fears of white America. So far, the polling data isn't with him. On the contrary, the data shows that white voters are increasingly sympathetic to the protesters and increasingly skeptical about Trump.

This is all shaping up, so far, as a replay of the 2018 midterm elections, when Trump put all his chips on a plan to terrify voters into voting Republican by hyping a "caravan" of Central American migrants that was supposedly "invading" the U.S. to rape and pillage white people. Despite wall-to-wall media coverage that made this "caravan" (in reality, a modest group of refugees fleeing violence) the No. 1 news story in the days before the election, Democrats still made major electoral beyond most pundits' predictions.

So racist fear-mongering, at least for the moment, isn't working for Trump. So why does he keep trying? Part of it is that he's a narcissist surrounded by yes men, who is certain that his own racist obsessions are more widespread among voters than they actually are. Part of it is that he doesn't have any other tricks in his bag. Getting more people to like him is pretty much out of the question. Campaigning on the economy, which was the original plan, is a no-go in the face of the worst unemployment since the Great Depression.

Donald Trump is fresh out of ideas. So we can expect he'll spend the next four months doing more of the same: Racist provocations and efforts to pump adrenaline into the culture war, in hopes that he can get white voters in middle America to hate liberals, progressives and people of color more than they hate him. So far, it seems not only to be failing but backfiring big time, making voters even sicker of this incompetent loser than they were already.