Trump believed calling for a massive show of force against protesters would be political gold. It's not working 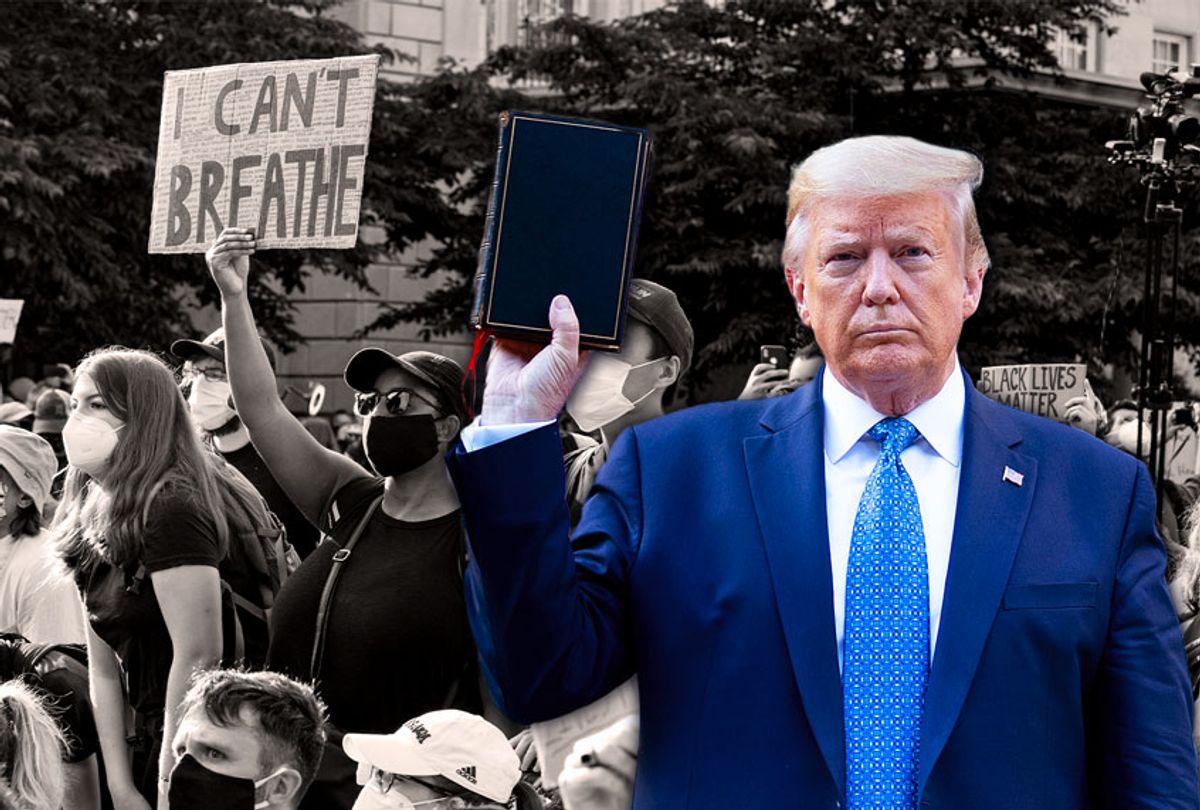 From the moment that protests against racist police violence started to spread from Minneapolis to the rest of the country (and the world), after a white police officer named Derek Chauvin killed an unarmed black man named George Floyd in a gruesome incident captured on video, it's been clear that Donald Trump thought this was exactly the Hail Mary he needed to win re-election. Trump has been desperate for a way to distract the country from the soaring death rate of the coronavirus pandemic (now at 108,000 and counting) and the 40 million left unemployed in the resulting economic collapse. He believed that a racist and sadistic backlash against the protesters was just the ticket.

"Tonight, I understand, is MAGA NIGHT AT THE WHITE HOUSE???" Trump tweeted on Saturday, anticipating clashes between protesters and police, who, taking their cues from Trump, have been assaulting peaceful protesters in multiple cities. (If he was hoping his gun-toting supporters from the "heartland" might show up in Washington, they didn't.)

Trump also tweeted "when the looting starts, the shooting starts" that weekend, echoing a slogan attributed to a notorious Miami police chief in the 1960s.

Trump has kept it up ever since since, instructing federal police to tear-gas peaceful protesters outside the White House on Monday evening to clear the area for his ludicrous photo-op holding a Bible in front of St. John's Episcopal Church in Lafayette Square, a stunt that outraged the bishop who oversees that church.

Earlier on Monday, Trump berated state governors in a phone meeting, calling them "weak" for not unleashing more police violence, declaring, "You have to dominate. If you don't dominate, you're wasting your time. They're going to run over you," and arguing that without violent suppression, the protests will continue.

Now, on the eighth day of these history-shaping protests, Trump's theory that a violent crackdown will end the protests and cause "real Americans" to rally around him in gratitude has been put to the test. So far, it looks like he couldn't have been more wrong. Violent crackdowns in many places have only made the protests larger, and polling suggests the public is rejecting Trump's sadism in large numbers.

When he finally spoke in the Rose Garden on Monday, Trump threatened to deploy the military against American citizens if the governors didn't take his advice for a more forceful crackdown. This threat didn't appear to cow anyone, and only increased the anger. More people started joining the protests, despite the ongoing pandemic, and the protests have spread from the cities to many smaller cities and suburbs. Going home at curfew probably would have been a popular choice if Trump had kept his yap shut, but now many protesters are openly defying curfew in cities like New York, Los Angeles and Washington, at least partly to deliver a specific FU to the president.

On the polling front, early numbers suggest that in this battle between protesters, on one hand, and Trump and violent police on the other, the protesters are winning the PR battle. An analysis by Michael Tesler of the Washington Post concludes that "the public views Trump as a racially divisive figure at a time when racial reconciliation is needed."

Polling from the past few days, according to Tesler's analysis, shows that only 31% of Americans approved of the looting-and-shooting tweet and only 37% of Americans were willing to say that Trump is not a racist. A majority of Americans — 52% — think Trump is a racist, which, considering how reluctant Americans are to use that word, is a remarkable finding.

Trump's approval ratings have held stubbornly at around 42%, but these flare-ups that remind people how racist he is —as when he called neo-Nazis "very fine people" in August of 2017 — tend to push it down temporarily to that 37% or so who will never acknowledge any negative evidence about him (probably because they share his views). This suggests that there's a small but noticeable minority of Trump voters who are made uneasy by his overt racism, and would prefer him to tone it down a little so they can rationalize their support for him.

Trump hasn't hidden that he feels considerable fondness for the days when Southern police would openly crack skulls, unleash dogs and otherwise violently assault the nonviolent civil rights movement of the '60s famously led by Martin Luther King Jr. and others, including current Democratic Rep. John Lewis of Georgia.

During the 2016 campaign, Trump regularly waxed nostalgic about that violence, talking about "the good old days" when "they used to treat them very, very rough" and "when they protested once, you know, they would not do it again so easily." He would whine about how "everybody's politically correct" these days, and so protesters can't be "carried out on a stretcher."

Trump's invocation of "the good old days" was vague enough that reporters were reluctant to point out the obvious: He was talking about how much he missed watching cops beat up and terrorize civil rights and antiwar protesters during his youth in the '60s. His behavior these days should remove any plausible deniability.

But while it appears Trump may have fond memories of rooting for the cops against civil rights protesters, no doubt egged on by his father (who was once arrested at a Ku Klux Klan riot in the 1920s), he appears to have forgotten that the cops did not come out on top back then either. On the contrary, the images of shocking violence against peaceful protesters helped build the political will to pass the Civil Rights Act of 1964 and the Voting Rights Act of 1965, the latter of which Trump and his Republican allies have been actively trying to gut (and often succeeding) in recent years.

If Trump is thinking about history at all, he's focused on the 1968 presidential election, in which Richard Nixon rode a wave of racist backlash against the civil rights movement to victory. He's not exactly being subtle about his theory, tweeting "SILENT MAJORITY!" , a reference to Nixon's campaign strategy, on Tuesday.

Overtly comparing himself to one of the most despised presidents in American history is a choice that suggests Trump dramatically overestimating the nostalgia other Americans feel for the viciously reactionary and pro-segregationist politics of the '60s and '70s. As multiple historians and historical experts have pointed out — including Todd Gitlin in USA Today, Kevin Kruse in the Washington Post and Jamelle Bouie in the New York Times — Nixon's victory wasn't just about harnessing racism. He was also the challenger in 1968, facing an incumbent party that controlled all branches of government and had presided over a decade of military debacle overseas and worsening unrest at home.

"You can't promise 'law and order' when disorder is happening on your watch," Bouie said, noting that this time around it's presumptive Democratic nominee Joe Biden who appears to be reaching voters who yearn for a return to the days of peace and normality.

In addition, political science shows that the number of white voters who thrill to overtly racist appeals is declining. It's still an unfortunately large proportion, to be clear. But in the 2018 midterms, exit polls showed that despite Trump's rampant racist demagoguery in the days before the election, the Republican share of the white vote declined from 57% to 54%. That's a modest change, but in a tight national election, it could make a decisive difference.

Even Republican politicians seem to understanding that the writing is on the wall. MSNBC put together a compilation of Republican senators asked for their opinion on Trump tear-gassing protesters so he could have a prettier photo shoot, and the whole thing is an exercise in how fast someone can run away from the camera, while trying not to say anything at all.

Even Senate Majority Leader Mitch McConnell, an avid Trump enabler in nearly all cases, resorted to a passive non-statement: "Egregious wrongs have been done," he said. "Much of it recorded." He did not say had committed the wrongs, or to whom.

No one mistakes Trump's chest-thumping about "law and order" as a legitimate call for either. After all, Trump is a shameless criminal himself who thrives on division and chaos. For people who like his racism, that's just fine. But most Americans are disgusted by his racism, and a small but interesting subset of white folks don't much care about the racism, but would prefer it were kept on the down-low. Both groups appear to be angry with Trump, or at least annoyed, for stoking the fires and calling for more police violence.

None of this is cause for complacency. Trump is still in a shockingly strong position to win re-election, due to voter suppression and the Electoral College that gives disproportionate power to his supporters, especially his most devoted fans in sparsely populated and more rural states. He won in 2016 even though Hillary Clinton got substantially more votes, and that could clearly happen again.

That said, Trump's margins were paper-thin in crucial swing states like Michigan, Pennsylvania and Wisconsin, and depended heavily on that margin of voters who are uncomfortable with his racism but somehow convinced themselves he was preferable to the alternative. The harder Trump makes it for those people to bury their head in the sand, the harder it will be for them to suck it up and vote for him again. His recent antics could make that very difficult indeed. He thought he could "dominate" the protesters, but at least for the moment they have the upper hand.