Trump has reshaped law enforcement: Endless cover-up for him, brutal clampdown on dissent

Trump puts himself above the law, but encourages police to assault anyone who objects to his criminal regime 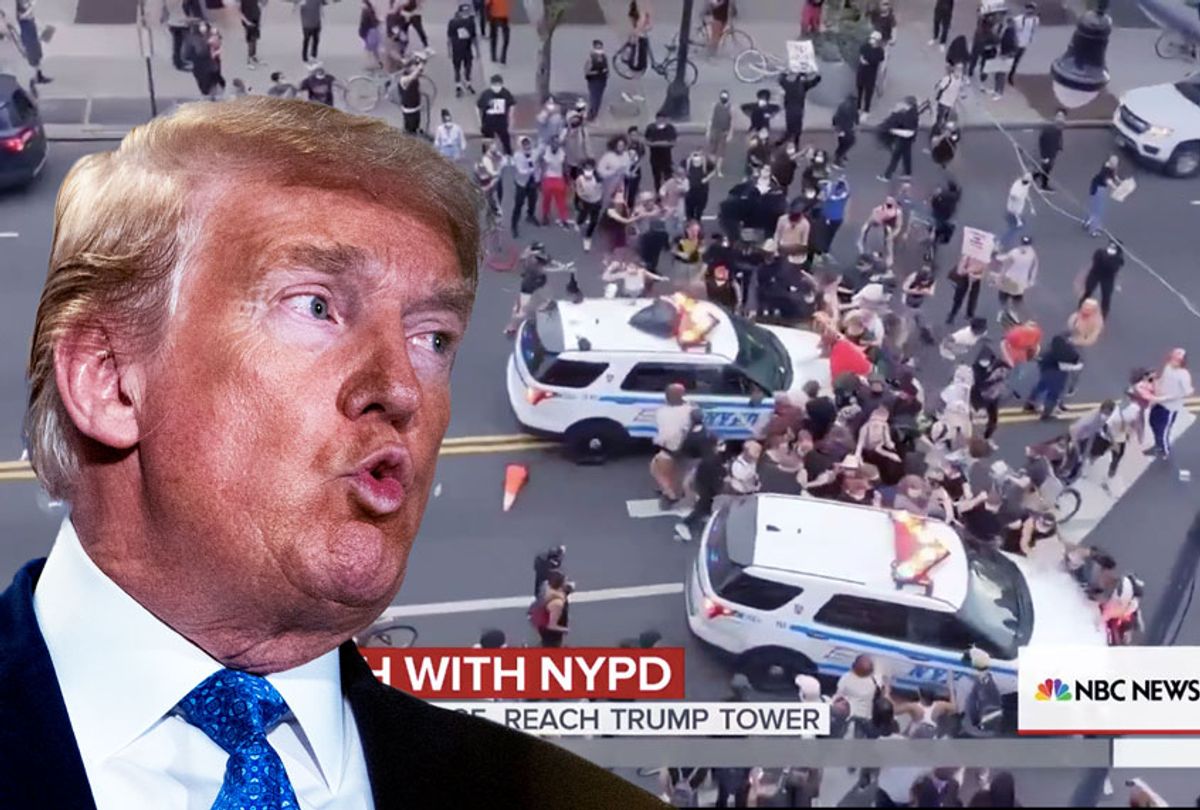 Despite headlines and news reports replete with loaded terms like "looting" and "riots," the real story of this past weekend was not the behavior of people on the streets protesting police violence. It was a story of numerous local police departments, emboldened by a wannabe fascist president, turning brownshirt against the ordinary people they are supposedly there to serve and protect. Make no mistake about it: This is a police uprising against American citizens. That's the true narrative.

As my colleagues at Salon spent the weekend documenting, the police assaulted, arrested, shot and gassed journalists, and even ran over peaceful protesters in an outburst of rage at the public for objecting to unchecked police power. In doing so, they were, egged on by Donald Trump. Police in Minneapolis set the tone by using tear gas against peaceful protesters on Tuesday, and ever since cops across the country have been doing everything they could to shift the headlines away from "protest" to "riots" by attacking protesters until they fight back or turn to property destruction.

Meanwhile, Trump isn't even bothering to hide that this is is more exciting to him than a fourth trophy wife and a barrelful of Viagra. He kicked things off early by encouraging police violence with a tweet promising "when the looting starts, the shooting starts," a direct quote from a notorious Miami police chief of the 1960s. He spent the weekend spooning out more turgid and sadistic tweets cheering on police brutality and calling for "Law & Order" against "Radical Left Anarchists," even though it was the cops who were roaming through neighborhoods shooting rubber bullets at people who were often doing nothing but sitting on their porches.

Part of this is the unsavory fact that Trump gets off on violent, racist fantasies, even though he's personally a coward who likes to hide behind others willing to do the hard work of actually assaulting people. Another part of it is that Trump thinks or hopes this is his political Hail Mary, that could distract the voters from 40 million unemployed and more than 106,000 dead from COVID-19.

But an even larger part of what gets Trump so excited is that recent developments represent the latest phase in his surprisingly successful project to remake American law enforcement in his own image, turning it from an institution that is at least supposed to enforce the law equally to one that exists to protect his corrupt regime and reinforce his desired race and class hierarchies. On one hand, he's rearranged federal law so that he and his cronies can commit whatever crimes they want without fear of consequences. On the other, he's trying to turn American police into his own personal army, more focused on shutting down dissent and terrorizing people of color than in enforcing the law.

Despite all his crowing about "law and order," Trump has made it clear that he does not believe the law should apply to himself or anyone he sees as valuable to his agenda. Instead, with the help of Attorney General Bill Barr, he has reshaped the federal bureaucracy — and especially the Department of Justice — to punish anyone who seeks to hold Trump accountable for his numerous crimes and ethics violations.

With Barr's help, Trump has successfully persecuted people who worked to expose Trump's criminal efforts to obstruct an investigation into Russian election interference, undermined efforts to prosecute Trump cronies who have committed crimes on his behalf, and took revenge on government officials who spoke out about Trump's criminal conspiracy to blackmail the Ukrainian president into helping him cheat in the 2020 election. Trump has rampaged through the federal bureaucracy, firing any inspector general deemed to be a threat to his efforts to grift from taxpayers or flout the law. Trump is incompetent in most regards, but with the help of more competent (not to mention profoundly evil) people like Barr, he's been able to create a federal bureaucracy geared not around enforcing the law, but enriching Trump and covering up for his crimes.

All along, Trump has continued to assert that "executive privilege" means complete immunity to any legal effort to hold him accountable for his apparent crimes and other violations.

Meanwhile, Trump has spent years encouraging the most authoritarian elements of America's police to believe they should be able to crush people of color and white progressives — whom he and his supporters perceive as race traitors, frankly — without regard for quaint notions like the law or equal justice. From the second he stepped into office, Trump has been rolling back DOJ efforts to hold local police departments accountable while using his public appearances to egg on police brutality against people of color.

Trump made a point of pardoning Joe Arpaio, the notoriously racist former sheriff of Maricopa County, Arizona, who was convicted for criminal contempt for his targeted racial harassment of Latino residents. But even though Arpaio was a convicted criminal, Vice President Mike Pence praised him for upholding the "rule of law." confirming that for Trump and his supporters, "law" is more like a code word for white supremacy.

Trump has also been encouraging lawlessness in his red-hat supporters, starting with his description of rioting neo-Nazis in Charlottesville as "very fine people" and going through his 2020 calls for armed militias to "LIBERATE" various states from their duly elected Democratic leaders.

Because of this, we have seen periodic outbursts of domestic terrorism by Trump lovers and other white supremacists, including the mass shooting at a synagogue in Pittsburgh and another one at a Walmart in El Paso. These events were isolated and, however unconvincingly, Trump disavowed them.  But now there are signs that the red hats are off the leash:, A Trump-loving bar owner allegedly shot and killed a protester in Omaha. A driver deliberately pursued and ran over a protester in Denver. A tanker truck driver plowed straight through protesters on a Minneapolis freeway. This comes on top of the various videos police driving into throngs of protesters, either intending to injure them or simply not caring.

Looking at all this, it's clear enough what Trump means by "Make America Great Again": Make America into a country where law enforcement isn't about enforcing the law equally for all people, but enforcing strict social hierarchies. A country where conservative white men, who realize they can't win fair elections, feel emboldened to use violence to keep the rest of us under their knee. A country where Trump and his cronies flout whatever law they like, while people who have done nothing thing wrong are beaten, intimidated or gassed for speaking out, and where police feel entitled to summarily execute black people like George Floyd under the thinnest of pretexts.

Trump's "great" America, in other words, is a country where we barely give lip service to democracy or rule of law, where the real power lies in brute force to keep the majority in line while a handful of privileged white men are free to do whatever they want.