No one in the media tried to normalize the clearing of Lafayette Park for Trump's BS photo-op. It's about time 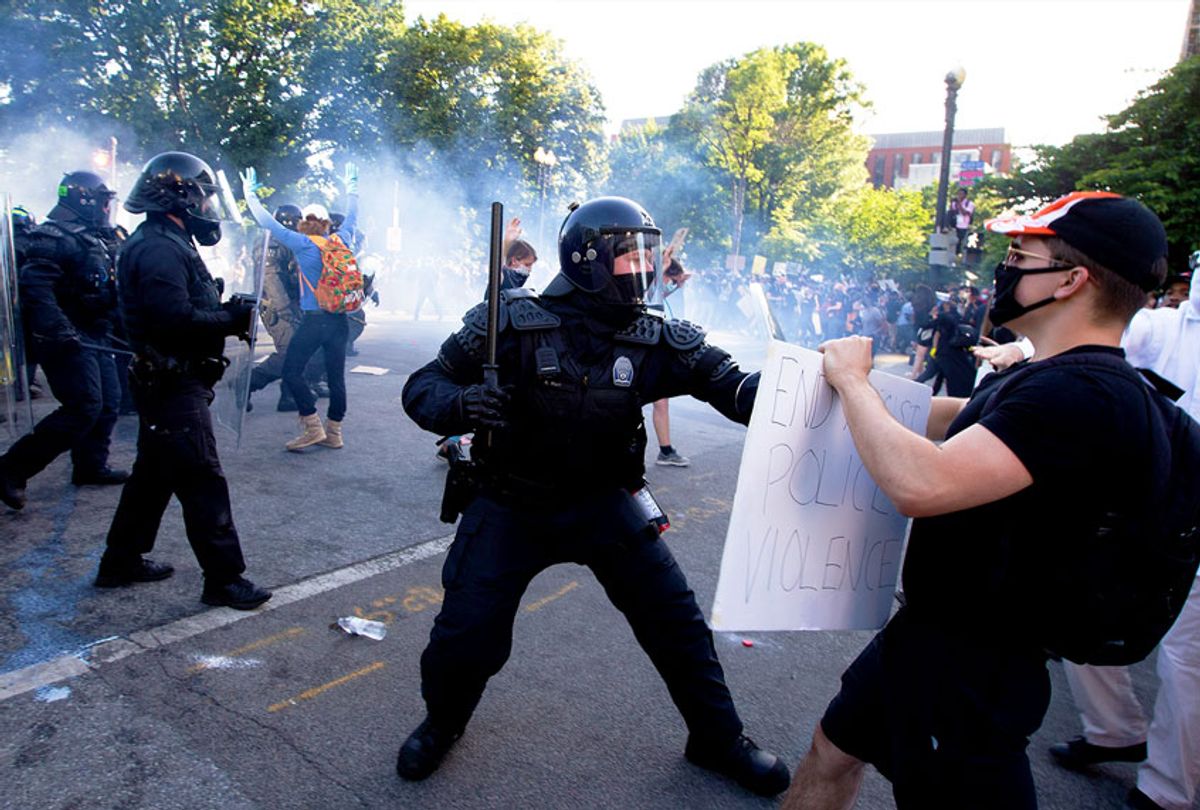 The pressure inside our top news organizations to normalize this presidency has been intense, fueled by the misplaced belief by newsroom and corporate executives that the office demands respect and that to act otherwise would be tantamount to "taking sides."

But the brutal storming of peaceful protesters in front of the White House by military troops and police — in order to clear the way for a propaganda-like photo op for Donald Trump — has pierced the detachment of even the most jaded journalists.

You could watch the veneer crack in in real time on Monday night, as the first-edition headline of the New York Times — the product of subservient stenography not appropriate even for normal presidents at normal times — was widely savaged by journalists on social media, leading someone at Times HQ to replace it with something a bit more reflective of the actual articles it ran above: "Trump Threatens to Send Troops Into States."

Here's a tweet from the chairman of the Temple University journalism school about the original front page:

You could see it in the Times' news alert, sent shortly after midnight:

And you could read it in one of those front-page articles. Katie Rogers minced no words as she set the scene:

People who gathered outside the White House to protest police brutality spent Monday waving signs and screaming for justice. They watched as police officers and National Guard units flooded Lafayette Square, delivering on a threat made by President Trump. And just before the city's 7 p.m. curfew went into effect, they were hit with flash-bang explosions and doused with tear gas.

It was because the president, who spent part of the weekend in a secure bunker as protests roiled, wanted to have his picture taken holding a Bible at a battered church just beyond the gates.

In the Washington Post, Rebecca Tan, Samantha Schmidt, Derek Hawkins, Fredrick Kunkle and Jessica Contrera referred to the attack on protesters as an "ambush."

Also in the Post, Philip Rucker, Robert Costa, Josh Dawsey and Seung Min Kim wrote that the attack on protesters was being "denounced by critics as authoritarian," and that Trump had "forced a brazen inflammation of the crisis convulsing the country by calling the nationwide demonstrations 'acts of domestic terror,' declaring himself the 'president of law and order' and taking the rare step of mobilizing the military to use force to quell the unrest."

You could watch the shift happening even at NPR, which rarely departs from both-sides-ism, as an early headline reading "President Trump Addresses the Nation and Walks to 'The Church Of Presidents'" gave way to one proclaiming "Peaceful Protesters Tear-Gassed to Clear Way for Trump Church Photo-Op."

Reporters tweeted that they have never seen anything like it:

One thing almost entirely missing from the initial mainstream-media coverage, or the follow-ups, was any attempt to normalize what happened at Lafayette Park — or any attempt to defend it at all.

Instead, we are reading blistering critiques from religious leaders, former military officials and the like.

The president seems to think that dominating black people, dominating peaceful protesters is law and order. It's not. He calls them thugs. Who is the thug here? Hiding in a bunker? Hiding behind a suit? Who is the thug?

People have waited for days for this wannabe wartime president to say something — and this is what he says, and that is what he does.

I've seen societies fall apart as a reporter. I've seen people dying in the streets while protesting. I've seen countries ripped apart by hate and misinformation and lies and political demagogues and racism. We can't let that happen here.

Of course, violence is no answer, but people protesting deserve answers, and they haven't gotten them, no matter how many black men have been murdered, lynched, imprisoned, mistreated, redlined, blackballed from jobs — we all know it. People protesting in the streets, they know it and they're tired of it. And we should be, too.

There is something about the starkness of the recent imagery — starting, of course, with the video of a white cop casually snuffing the life out of a black man with a knee to his neck, and including so many scenes of journalists being targeted, harassed, sprayed, shot and arrested by police — that suggests, as I wrote on Monday, that the perspective of the press is shifting.

One gets the sense that we are entering the final phase of something — possibly of Trumpism, possibly of democracy. So it's entirely appropriate for the press to stop pretending that it's just business as usual.