Trump and the statues: He still thinks provoking conflict will get him re-elected

Despite the tear gas and Tulsa, Trump still believes he can win by inciting cops to crack protesters' skulls 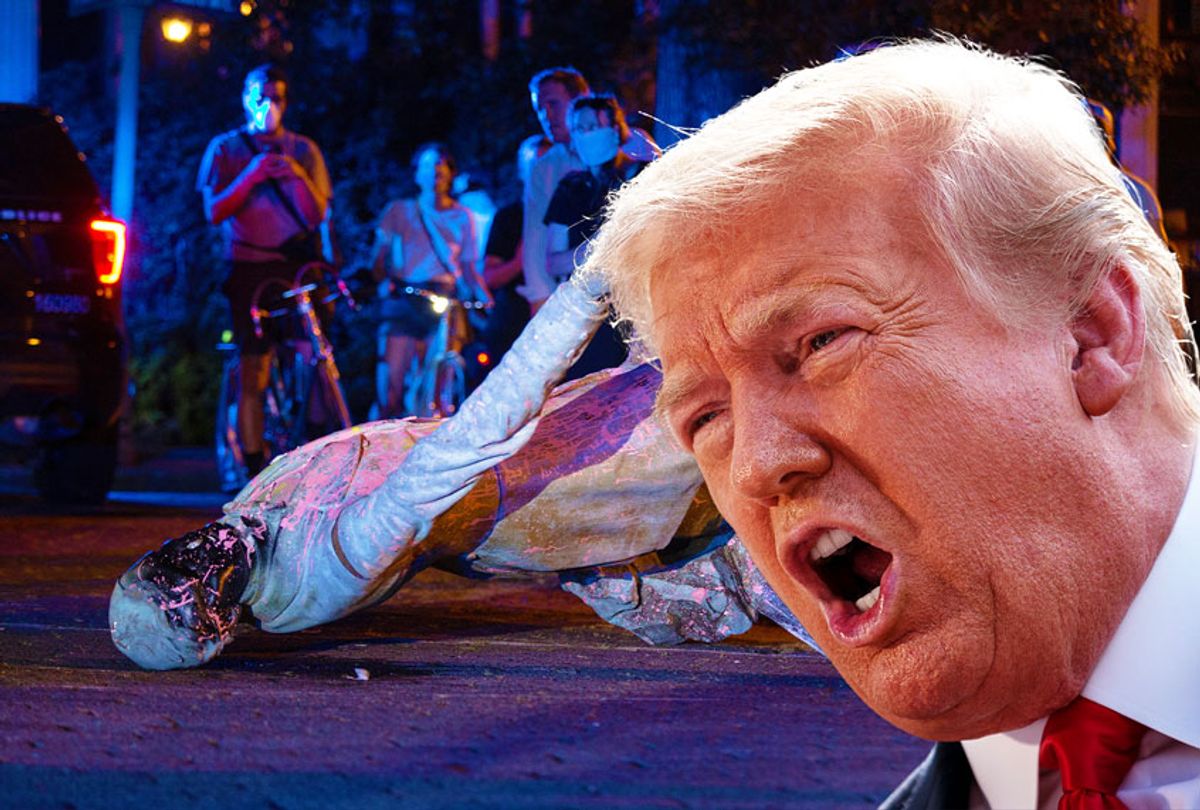 Donald Trump | A statue of Confederate States President Jefferson Davis lies on the street after protesters pulled it down in Richmond, Virginia, on June 10, 2020 (Getty Images/Salon)
--

Donald Trump is convinced he's the second coming of Richard Nixon. We'll leave aside the psychoanalysis of why someone might be so eager to present himself as heir to one of the greatest villains in American history, but Trump hasn't been subtle about his belief that he can replicate Nixon's 1968 electoral victory by triggering the same animus against civil rights activists and leftist protesters that Nixon successfully exploited back then, but with even less subtlety. (And Nixon wasn't exactly subtle.) Trump even routinely echoes the "law and order" language of the Nixon campaign, even while gleefully flaunting his own criminality and corruption, lest there be any doubt that "law and order" is simply coded language for racism and reactionary impulses.

The problem is that Trump's efforts to demonize anti-racist protesters keep backfiring.

First, Trump ordered the tear-gassing of a crowd of peaceful protesters in front of the White House, in an effort to generate images of chaos and violence that he could then blame on them. Instead, the action garnered even more sympathy for the protesters, who were seen as the victims of Trump's violent and censorious urges. Besides, it made him look like a cowardly bully — garnering him the immortal nickname "Bunker Boy" — a guy who was so afraid of being heckled that he had people gassed to avoid it.

Trump tried again, scheduling a campaign rally on Juneteenth, the day that many Black Americans celebrate Emancipation, and in Tulsa, Oklahoma, mere blocks away from the location of one of the worst racially motivated mass murders in American history. The date and location were deliberate provocations, and Trump made plain his longings for scenes of violence outside the rally, even going so far as to encourage the Tulsa police to start cracking skulls. Instead, what he got was a pitiful turnout from his own supporters — who barely filled a third of the arena — and a peaceful protest outside that got virtually no media attention.

But Donald Trump has never been one to let the empirical evidence of the real world shake his convictions, and so it is with his belief that his path to re-election involves widespread video clips of police gassing, beating or otherwise doing violence to the people who are gathered in the streets to demand an end to police brutality and a reckoning with our nation's history of racism. So this week, he's taking his third swing for the imaginary fences.

On Wednesday, the White House ordered the U.S. Marshals Service to put resources into guarding any national monuments that might be targeted by protesters for vandalism, because the monument appears to celebrates white supremacy or is a tribute to an apparent white supremacist. The order reportedly came from Attorney General Bill Barr, in response to the number of incidents nationwide where protesters have spray-painted or attempted to tear down such monuments.

Most of the statues that have been targeted this way were erected both to honor Confederate military leaders and to signal to Black residents of a community that their presence was not welcome. In many cases, local leaders have responded to the protests by giving into their demands and having city services take down such statues safely, rather than leaving it up to the chaos of the crowds. But this particular order came after an attempt to tear down a Washington statue of Andrew Jackson, who certainly was a racist and a supporter of slavery, but is being targeted in this case for being an enthusiast of genocidal policy toward Native Americans.

Of course the particulars around any one statue aren't really the issue. It's doubtful that Trump or any of the conservatives angrily spitting out platitudes like "those who forget history are doomed to repeat it" would care if these statues were coming down, say, to make room for a Doubletree Inn or a parking garage. It's all just an excuse to bash protesters who make them feel guilty about racism, under the guise of defending "history."

Needless to say, there are lots of ways to remember unpleasant history without erecting statues to the worst villains of it. The German government understands this, which is why they don't have statues of Hitler astride a horse, and didn't name the Munich airport after Joseph Goebbels.

One could visit the National Memorial for Peace and Justice in Montgomery, Alabama, a place that memorializes the Black people who were murdered in lynchings and portrays the grim realities of slavery. That's a far superior way to engage history, one that is honest and doesn't valorize literal villains.

Trump is not "defending history," but trying, once again, to create a violent confrontation between law enforcement and street protesters. Trump and his minions are no doubt aware that most of the protests have been peaceful, but in the cases where they haven't been, that's largely because cops starting attacking people who decided to fight back rather than surrender or flee. Team Trump is also betting that as long as the images show cops and protesters tangling with each other, the public will blame the protesters and not the cops. The hope is that antipathy towards protesters can be translated into votes for Trump, who also hates the protesters, mostly because he's a racist and an authoritarian.

Will it work? So far, not even a little. Trump's previous attempts to create conflict between police and protesters have only managed to make him look a bully or an idiot. And there's a not-small chance that his efforts will backfire this time, by drawing more attention to the original problem: This country is littered with thousands of statues that celebrate white supremacy, which most Americans these days recognize is a problem.

The irony in all this is Americans are learning way more history from the statues coming down than they ever did walking past them in the first place. Most Americans couldn't tell you much about Andrew Jackson at this point, but if they read a newspaper article about the controversy surrounding his statue, they might learn why his legacy of racism and genocide is problematic at best. They might not know how or why city governments erected Confederate statues as a signal to 20th-century white supremacy — in most cases, they went up many decades after the Civil War — but if they've followed the reporting on the statue removals, now they know. They may not know who Frank Rizzo was before his statue came down, but now they know that in the recent past Philadelphia had a mayor who literally told people to "vote white."

People are defacing or pulling down these statues in no small part to draw attention to real histories and educate the public about the depth and breadth of American racism. By making a stink about it, Trump might be helping them out. He is arguably the most hated man in America, with more than 55% of the voting public consistently expressing their disapproval. At this point, if Trump hates something, that's likely to make most Americans like it even more. The more he bashes the protesters, the more the general public will view their cause with sympathy.