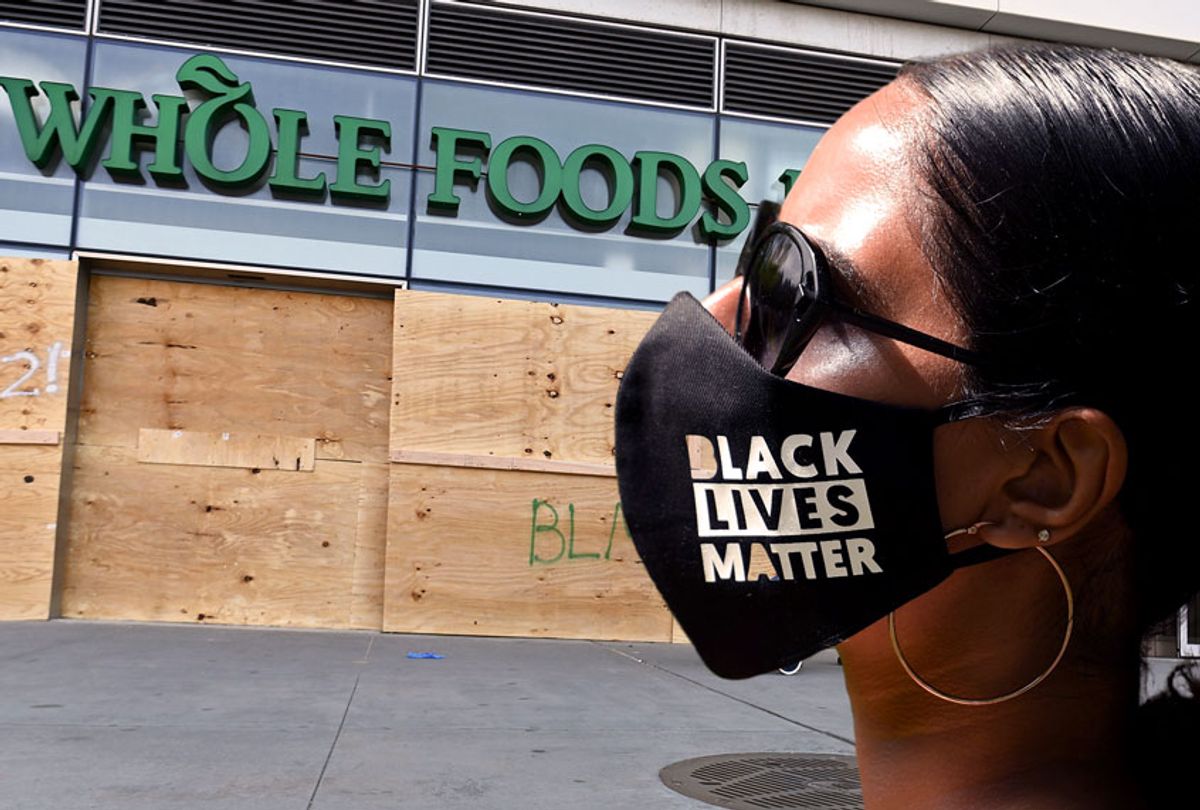 This week, a group of Whole Foods workers in Cambridge, Massachusetts, walked out after being told they couldn't wear Black Lives Matter masks because they weren't part of "the company dress code."

Prior to the incident, wearing masks with other symbols or logos, including ones that featured the New England Patriots, were reportedly acceptable.

This is according to a report in the Boston Globe, which details how Whole Foods worker Savannah Kinzer and a few of her colleagues wore BLM-themed masks on Wednesday. A manager told them they either had to remove the masks or go home. Seven of them walked out. On Thursday, Kinzer showed up and passed out more masks, but they were met with the same fate. Dozens of workers were sent home again.

Visitors to the Whole Foods Market website are greeted with a prominent message that reads: "We support the Black community and meaningful change in the world." "Racism has no place here," the site's headline states.

The story from Boston is merely one of many reports of many of Whole Foods workers being sent home for wearing masks featuring the phrase or iconography of "Black Lives Matter." There are similar reports from workers at Whole Foods stores in New Hampshire and Seattle, Washington. In Philadelphia, protesters protested in front of one Whole Foods after a similar incident occurred.

In  a statement to Salon, a Whole Foods Market spokesperson said:

Whole Foods is one of several companies that pays lip service to the civil rights movement publicly while taking action against workers donning Black Lives Matter apparel or protesting.

Earlier this month, "Boycott Starbucks" trended on Twitter after BuzzFeed published a report on how the coffee retailer stated its employees were also prohibited from wearing BLM attire because of the company's "dress code policy."

"My skin color incites violence at Starbucks. Should I not come to work?" Calvin Bensen, a 22-year-old barista, told BuzzFeed News. "It is silencing and Starbucks is complicit. Now more than ever, Starbucks needs to stand with us."

"Until these arrive, we've heard you want to show your support, so just be you," the company stated in a letter. "Wear your BLM pin or t-shirt. We are so proud of your passionate support of our common humanity."

More recently, as Salon previously reported, the Trader Joe's grocery store in Seattle's Capitol Hill neighborhood put signs up stating that they had closed "indefinitely" after dozens of the store's clerks had, that very week, asked permission to take time off to attend Black Lives Matter protests. Workers told Salon their manager appeared to be OK with the request at the time.

"We were told that our participation would be kind of an excused absence, and we wouldn't be punished or anything for going to the protest — and like I said, myself and others were directly approached by management," Trader Joe's Crew Member Erin Or told Salon. "It was like this idea that 'this is okay, we want you to go, that this is something you should do, and it's good to support this movement.'"

Since the store closure, employees have gathered nearly 25,000 signatures to reopen the store, which is said to be happening on July 1st. The company's spokesperson denies that the surprise closure was retaliatory or had anything to do with the employees' approved time off to attend a march.

Yet the store's employees believe the company is not telling the truth and that the inexplicable closure was suspect.

"There's a gross lack of transparency between management and crew that has caused me unnecessary anxiety which prevents me from performing my job to the best of my abilities," Or said at a Thursday press conference this week. She added that she has been singled out and faced consequences that her white coworkers have not. "Because of the lack of communication and inconsistent disciplinary policy, I feel that any error or miscommunication at work can lead to me losing my job."

Indeed, transparency around job expectations and disciplinary processes are one of the five demands workers at the store are asking for in writing.

Outside of Seattle, there have been more reports of workers facing repercussions for wearing BLM attire. These reports follow other stories of labor unrest at assorted Trader Joe's around the country; many workers believe the company has been putting customer comfort before worker safety during the pandemic.

These stories speak to another social shift: Service workers and grocery clerks appear to have more political capital than they did pre-pandemic, which has driven more of them to publicly speak out about corporate hypocrisy and inadequate conditions. In the case of corporations "supporting" Black Lives Matter, many observers believe cases such as Whole Foods' epitomize performative allyship.