Who doesn't love a taco? "Taste the Nation" & the problem with neoliberal immigrant rights activism

Can we plausibly claim to "love immigrants" if we eat the food they prepare while ignoring their exploitation? 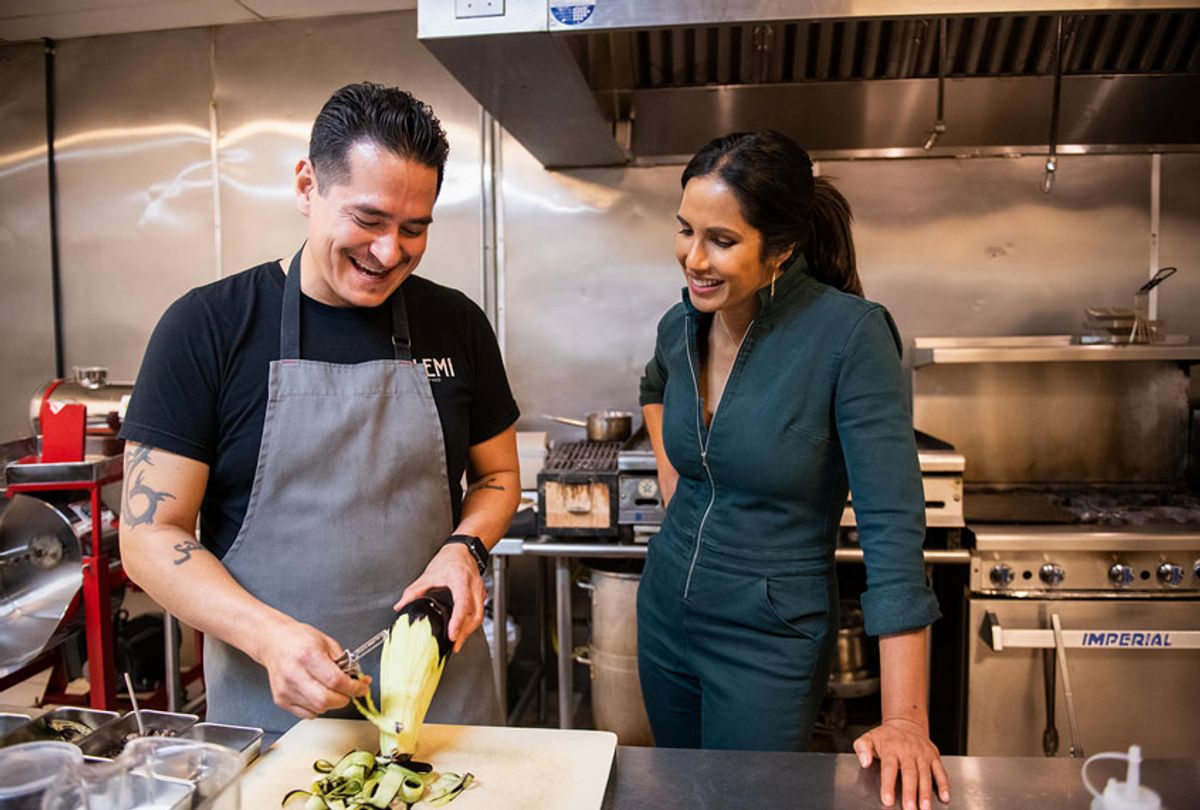 The celebrated new Hulu program "Taste the Nation," hosted by acclaimed writer and "Top Chef" star Padma Lakshmi, is a "journey across America" to explore the cuisines and connected life-stories of different immigrant groups. It makes an important statement about the value of immigrants in Trump's America, but the immigrant rights movement must learn key lessons from what it misrepresents and ignores.

This is particularly true of the show's first episode — filmed in the U.S.-Mexico border town of El Paso, Texas — which demonstrates, albeit unintentionally, how ostensibly pro-immigrant rhetoric often buries the cross-border classism and exploitation that help bring scrumptious immigrant cuisine to American plates at tantalizing prices.

To be clear, the show does a noteworthy job showcasing delicious El Pasoan foods. The viewer can almost smell those fresh tomatillos sizzling greenly on a backyard grill, and savor the corn tortillas hot off a slick comal. We learn from food scholar Gina Nuñez-Mchiri how burritos, which are said to hail originally from El Paso's adjacent "sister city" of Ciudad Juárez, Mexico, can deepen relationships when exchanged with love.

But things get problematic when Lakshmi and others (not Nuñez-Mchiri) repeatedly suggest that more widespread eating of burritos and other Mexican dishes can actually eliminate anti-immigrant attitudes in the United States. Such claims, which enable us to "celebrate" immigrants by eating the cuisine they make us while sidelining widespread immigrant oppression in our hierarchical food system, constitute a neoliberal form of immigrant rights activism.

Take the episode's frequent, harrowing representations of Ciudad Juárez. When Juárez first comes up, the viewer is confronted with unidentified footage of some meth lab (which may or may not be located in Juárez, or even in Mexico), shots of the poor Juárez colonias that happen to be visible from El Paso, and scenes of police officers in a shoot-out. One wonders whether one is learning about El Paso's beloved kin or viewing a clichéd film about Latin American drug dealers.

Apart from a glimpse of a Juárez market, we never get to the "inside" of that city, even as we are informed that many of El Paso's restaurant workers regularly cross the border from Juárez to El Paso for their jobs. The appropriateness of the "sisterhood" references is never questioned—even as El Paso chef Rico Torres says that El Pasoans don't go to Juárez anymore due to fears of violence, and claims he is lucky to have born in El Paso (not Juárez). If this is, in fact, a "sisterhood," then Juárez is an unwed Cinderella scrubbing at her sisters' feet.

Problems also arise when Lakshmi visits H&H Carwash and Coffee Shop, rumored to be the best place to get a "real El Paso meal." The cooks, we are told, cross the border from Juárez to El Paso for each day. In a surprising twist, we learn this quintessential Mexican restaurant is, in fact, owned by a non-Mexican, Trump-supporting El Pasoan named Maynard Haddad, whom Lakshmi interviews, hand-in-hand, surrounded by Maynard's many U.S. flags. Haddad intends to vote for Trump yet again, he says, but he just cannot make sense of why Mexican workers who cross the border (due to, in his words, their insurmountable "hunger") are being harassed along their way.

Lakshmi then interviews Haddad's Mexican workers, without any acknowledgement that they may feel uncomfortable speaking openly about their Trump-loving employer on camera. Maynard can be difficult, one of them says, but he has a big heart. Lakshmi replies that we all have a Maynard in our family — and wouldn't things be better for immigrants if we all showed these Maynards some empathy?

Finally, Lakshmi interviews Maynard's daughter, who emphasizes that there is "so much love" in El Paso, and then unselfconsciously states that her family would not have a successful business were it not for immigrant workers. Lakshmi does not appear to regard this as controversial, but viewers should certainly question whether hiring such workers under exploitative conditions that U.S. citizens would reject is an act of pro-immigrant "love."

Similar questions are raised by Lakshmi's interview with chef Rico Torres, who states that our immigration problems would be dealt with if only there were more "love and forgiveness on both sides." Yes: if only Mexicans and other immigrants of color could open their hearts to those forces that cage their weeping children, violently harass and surveil their communities, and shoot them down in Walmarts, things would be better for them? He and Lakshmi then agree that anti-immigrant sentiment would subside if the racists would just eat some Mexican food, for "who doesn't love a taco?"

It is telling that Café Mayapán, a Chicana-led El Paso restaurant run by women with a long history of organizing on behalf of maquila employees and other workers in El Paso and Juárez, is featured far less prominently in the show. The women behind Mayapán do not endorse the "love thy oppressor" message characteristic of this episode; instead, they approach the immigration justice struggle as an intersectional resistance that must center immigrant workers' demands.

Perhaps it is unfair to demand a class-conscious approach to immigration justice from a popular TV show with brazen product placement for BMW. And there certainly is value in showcasing the stories of immigrant struggles and successes on which Lakshmi focuses over the course of many episodes. If anything, Episode 1 of "Taste the Nation" is only "guilty" of revealing flaws are already inherent in neoliberal immigrant rights activism. We must resist the idea that we can plausibly claim to "love immigrants" if we eat the food they prepare while turning our backs on the cross-border classism and exploitation that makes it so accessible. Exchanging burritos can be an act of love, but it can also constitute oppression.

Amy Reed-Sandoval, a former El Paso resident, is an Assistant Professor of Philosophy at the University of Nevada Las Vegas and author of Socially Undocumented: Identity and Immigration Justice (OUP, 2020).

Iván Sandoval Cervantes, who is originally from Ciudad Juárez, is an Assistant Professor of Anthropology at University of Nevada Las Vegas. He is writing a book on internal and transnational Mexican migration.