Crisis in the Navajo Nation: Voter suppression, racism and a deadly pandemic

The COVID-19 death rate in the Navajo Nation is higher than in any U.S. state. This isn't an accident: It's history 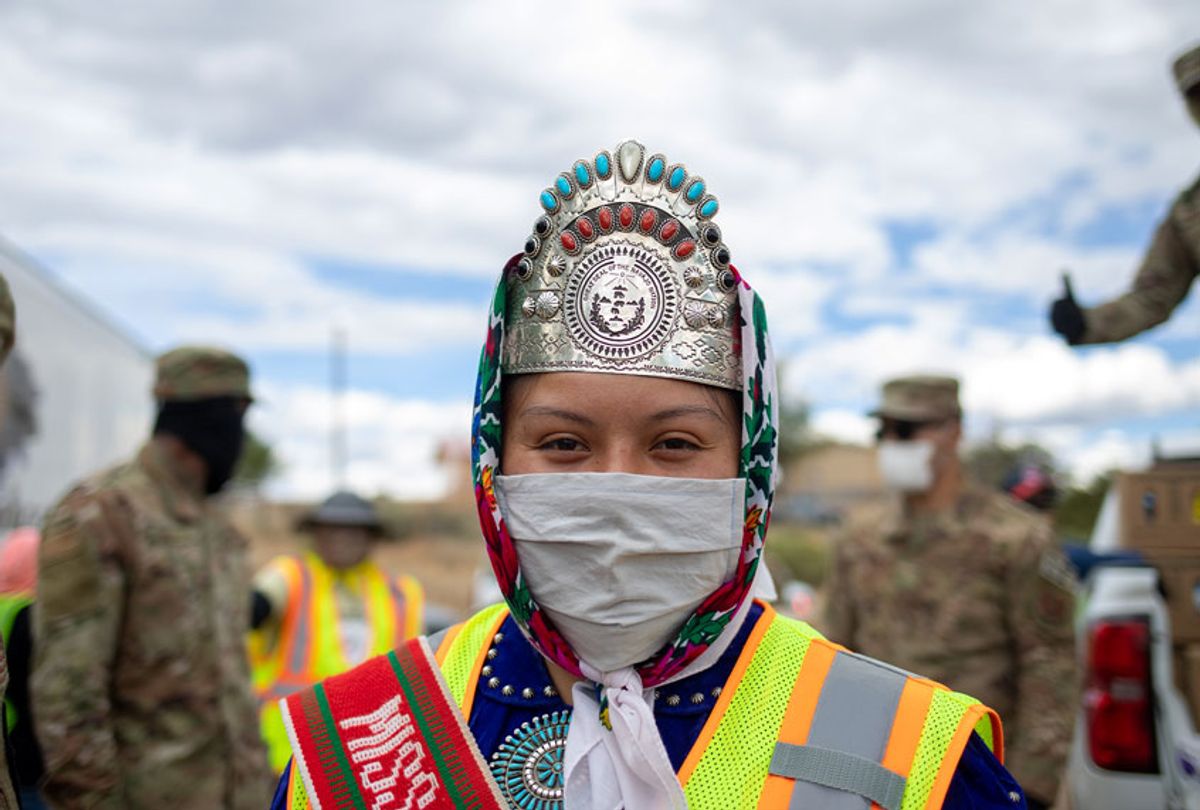 Miss Navajo Nation Shaandiin P. Parrish puts on a white gown to help distribute food, water, and other supplies to Navajo families on May 27, 2020 in Huerfano on the Navajo Nation Reservation, New Mexico. Encompassing parts of Utah, Arizona, and New Mexico, the Navajo Nation now has the highest number of positive COVID-19 cases per capita in the United States, as the spread of the coronavirus continues to disproportionately effect minority communities across the country. (Sharon Chischilly/Getty Images)
--

The Navajo Nation has been under lockdown the last two weekends as COVID-19 cases surged to dramatic highs across Arizona and Utah, potentially unraveling weeks of painstaking efforts to keep the virus spread contained.

The pandemic has ravaged Navajo land. More people have died here than in 16 states, and the per capita death rate — a tragic toll of 177 per 100,000 residents — is higher than in any single American state. As outbreaks across Florida, Texas and elsewhere make national headlines, the virus rages here too, far from the national consciousness.

This unfolding crisis, of course, cannot be separated from decade upon decade of neglect, broken promises and, yes, genocide, that has been inflicted on the Navajo and other indigeneous people by the United States of America. Those centuries of abuse have also created massive structural inequities and day-to-day living conditions that make it harder still to counteract the coronavirus in the present moment. This isn't history. We own this shame.

One-third of the Navajo population lacks running water. There are 13 grocery stores across 27,000 square miles. Housing is overcrowded, and many Navajo live together in communal homes. The hospital and health care system is understaffed and underfunded. There's unreliable access to electricity and the internet. State and federal governments agreed to meet these costs via treaties and statutes; they have not kept their word. Billions owed have not been paid.

What's more: Voting rights across states with large Native American populations continue to be rife with suppression efforts, gerrymandering and other egregious attempts to deny Navajo and others fair representation and fair access to resources and government dollars. Once again, this isn't history. It's current events. And it has exacerbated the COVID-19 pandemic and led to unnecessarily high death rates.

"We've been lied to and we've been messed with for years and years," says Leonard Gorman, executive director of the Navajo Nation Human Rights Commission. "On one side, the story is forever changing. On our side, we're forever baffled."

Consider San Juan County in southern Utah, a single county nearly the size of New Jersey that stretches across thousands of square miles bordering Arizona and Colorado. Its population — estimated at just 15,000 — majority Navajo, and yet its resources have been monopolized for decades by two small, largely white towns, Blanding and Monticello, via underhanded tactics and dirty dealings. When the Mormons arrived in this region in the 1880s, they forcibly removed the Navajo and other Native tribes, pushing those who weren't killed into the desert far south. They took the land. Then they claimed all the power.

Utah did not extend the vote to Native Americans until 1957, and then only under court order. It took another three decades for a Navajo to be elected to public office. Until the mid-1980s, white voters in San Juan County maintained complete control by electing the county commission with at-large districts. Because whites voted easily and conveniently, their turnout was always higher, and they maintained every seat. They made it harder for the Navajo: County clerks refused to register them, knocked Native candidates off the ballot for made-up or picayune reasons, and printed ballots only in English.

The Department of Justice finally took notice in 1983 and forced the county to scrap the discriminatory at-large system and replace it with three districts, assuring the Navajo of a voice. The districts the white officials drew, however, were so gerrymandered that they guaranteed themselves the loudest voice. The two largest white towns were placed in separate districts, while more than 90 percent of the Navajo population was packed into the third district.

Now the white towns controlled the commission just two to one, but they made sure they kept all the resources and public dollars. Well into the 1990s, county officials denied any responsibility to educate Navajo children. New schools, libraries, health centers, golf courses and community centers, often with public funding, opened in Blanding and Monticello. Meanwhile, roads across the Navajo land are impassable after a good rain. Horrified Justice Department officials concluded they "hadn't seen anything so bad since the '60s in the South."

And yet: After the 1990, 2000 and 2010 censuses, officials didn't bother redistricting the county officials at all. After a lengthy legal battle, a federal judge ordered the districts redrawn by a special master ahead of the 2018 election, and under a fair map, the Navajo had a road to victory in two of three districts. County officials went back to their old tricks and conspired to knock the leading Navajo candidate, Willie Grayeyes, from the ballot. This time, they failed. In November 2018, for the first time ever, Navajo members won two of the three seats. It wasn't easy. San Juan County became a vote-by-mail county in 2018, another advantage for Blanding and Monticello over the Navajo land, where there are three postal stations across all those hundreds of miles, tucked into the back of convenience stores.

When I met Grayeyes for coffee and blue corn cakes at the Twin Rocks Cafe in Bluff, Utah, days before his victory, he told me that the county receives federal dollars based on its size and population. But then "water, natural resources, education dollars, they all stop there." Nothing flows south over what he called "the invisible wall" of the two white towns. "It does not matter how many miles we have, or how many people," he said. "Where are the roads? Health services? Public safety? Telecommunications infrastructure? We need to break that wall down, one stone at a time."

That wall was built, in part, and maintained by voter suppression. The deep inequities and structural disparities across San Juan County and the Navajo Nation — the health issues exacerbated by years of neglect, now exacerbated by a pandemic hitting this population harder than any other nationwide — were built and maintained, in part, by rigged elections. Not in 1880 or 1964. Right now. In our own time. And it is leading to the death of Native people not in 1630 or 1830, but right now.

As a pandemic rages across the Navajo Nation, our long overdue national reckoning must grapple with this as well.