Would George Washington have worn a mask? A brief history of the Founders and public health 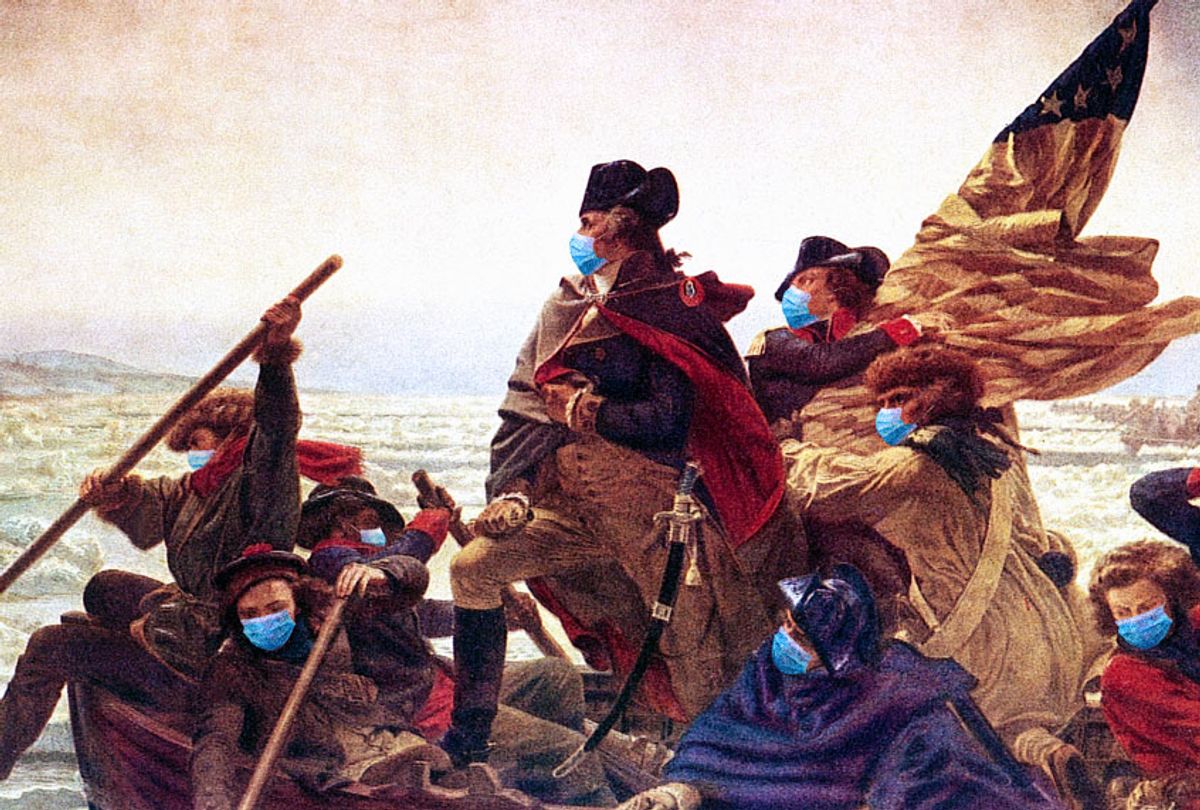 The end of June marked a milestone in America's efforts against the COVID-19 pandemic. Even as American deaths pass the 125,000 mark and many states see infections and hospitalizations rising, the Trump administration reportedly plans to end financial support for testing centers. As one commentator put it, "the federal government has all but given up" responding to COVID-19.

At the core of resistance to lockdown measures and criticism of government response are questions of civil liberties. On a recent visit to Maine, President Trump referred to Governor Janet Mills as a "dictator" because she resists reopening over fears that arriving tourists would increase infection rates. Conservative articles condemn mask-wearing as a sign of weakness and worry that required masks provide a way to "weaponize the virus against American liberty." Citizens echo this, describing lawmakers who implement mandatory-mask laws as "stomping on our constitutional rights." Anti-protest signs employ revolutionary-era rhetoric by mentioning tyranny, constitutional rights and freedom, with Gadsden flags in the background.

A recent article by legal scholar Stephen B. Presser goes so far as to ask if George Washington would wear a face mask in response to the COVID-19 pandemic, suggesting that public health restrictions can rationally be viewed as violations of America's founding values.

In truth, far from being contradictory to the founding ideals of the United States, early Americans understood government-supported health measures were a mandatory component to the health of the population and national strength. George Washington and a multitude of other 18th-century leaders left abundant evidence behind explaining how they felt about public health and the prevention of death as it relates to governmental responsibilities.

British North America experienced at least 18 epidemics in the 18th century, and each one sparked regulations on movement, businesses, trade, street cleanliness, air pollution and public gatherings such as funerals. At the outset of that century a new theory known as "political arithmetic" gained broad acceptance which espoused that with a larger population comes a stronger nation. Community leaders studied their mortality rates in order to identify major threats and trends.

This statistical approach to death gave rise to the possibility that humans could manipulate mortality rates and decrease the number of deaths. Benjamin Franklin asserted that officials could achieve population increase by "natural Generation," meaning births outnumbering deaths, "if the Laws are good." In this vein of thought, governments helped the population flourish by assuming responsibility for issues that threatened depopulation, including devastating diseases.

American colonial officials attempted to strengthen public health measures for the community at large, a core issue in the 1721 Boston inoculation controversies. The minister Cotton Mather and physician Zabdiel Boylston promoted inoculation, a predecessor to vaccination. They were correct; inoculation protected against smallpox. Their opponents, however, had a winning argument for many decades: inoculation might save individual lives, but it also potentially spread the disease when not closely monitored and quarantined for several days. One writer compared inoculation to "willfully throw[ing] a Bomb into a Town."

The government publicly responded to the dangers of inoculation by outlawing the procedure in order to prevent community spread. The Boston Town Meeting reprimanded Boylston and the Massachusetts General Court required anyone who underwent inoculation to be quarantined at a temporary hospital. In response to the epidemic, colonial and municipal officials limited movement in and out of the city, inspected houses and posted guards. Eventually, statistical evidence convinced the public that inoculation was safe, but it remained outlawed in colonies like South Carolina and Virginia because officials believed it threatened public health overall.

Early Americans did not understand health to be entirely about individual action, so solving health problems required coordination at a broader, collective level. By the latter half of the eighteenth century, leaders turned to institutions in order solve problems.

One of the earliest and most famous public health institutions was the Pennsylvania Hospital. Franklin used his position as a member of the Pennsylvania Assembly to procure public funding for the institution. The hospital opened its doors in 1752 in order to treat poor patients and also serve as an educational experience for doctors-in-training. By this point, a major goal of public health was prevention, to eliminate the conditions that would lead to the introduction and rapid spread of sickness. This meant accessible hospitals for the ill, restructuring landscapes in order to promote cleanliness, and implementing sanitation plans based on the best scientific and medical knowledge of the day. Franklin extolled the hospital as a crowning achievement of humaneness and government, declaring "the good particular men may do separately in relieving the sick is small compared with what they may do collectively."

Officials' attention to health carried into the revolutionary and early national eras, when national leaders at the highest levels directed healthcare decisions in order to serve the public good. During the American Revolutionary War, health was at the forefront of General George Washington's priorities. One of his first requests from Congress as commander-in-chief was to establish a Medical Department for the Continental Army. After smallpox contributed to defeat at Quebec and stories circulated that the British deliberately spread the disease to weaken revolutionary soldiers and sympathizers, Washington mandated all non-immune and future Continental Army soldiers be inoculated. His decision was controversial because inoculation was still outlawed in some states. In her book "Pox Americana," Elizabeth Fenn described this initiative as the "first large-scale, state-sponsored immunization campaign in American history" which historians consistently hail as one of Washington's most significant strategic victories. He saw strength in health and used government resources to intervene in health measures for the common good.

The idea that a healthy citizenry equaled a healthy nation and reflected a healthy government was at the forefront of President John Adams's mind when he signed the Seaman's Act in 1798. This bill created the Marine Hospital Service, a network of hospitals located along major waterways throughout the United States. Mariners paid a type of proto-insurance out of their monthly wages to employers that contributed to hospital care with the U.S. government covering the remainder of the expenses. The federal government now took control over some municipal and state public hospitals, such as the Marine Hospital in Charleston, but Adams and others believed these actions were necessary because it protected the health of seamen, who contributed to the economic and commercial health of the nation.

To be sure, 18th century public health advocates perpetuated racial inequalities in their theories and institutions that are echoed in the racial disparities of our current pandemic. Population studies often separated out or failed to include non-white deaths, and enslaved men and women were used as test subjects for procedures like inoculation. Medical practitioners in the famous 1790s Yellow Fever epidemics believed Black Americans had more immunity to the disease and therefore encouraged them to be hired as nurses and gravediggers, a practice that resulted in higher mortality rates.

As regulations loosen across the country and infection and hospitalization rates consequentially increase, the CDC Director recently testified before Congress that as many as 100,000 contact tracers and massively increased testing are needed to cope with an almost certain second wave of coronavirus infections. His recommendations have already received backlash as giving "government near-total control of citizens."

Famous founders, medical philosophers and ordinary citizens recognized that shared threats to life required collective action to coordinate resources, staff them properly and implement expert opinions. Their emphasis on public health served the common good and may be values to keep in mind as America continues to fight the COVID-19 pandemic in the months and years ahead.

Kristin E. Tremper is a Ph.D. Candidate in Lehigh University's Department of History.