Meet Kongonaphon kely, the ancestor of some of the most ferocious land animals to have ever lived 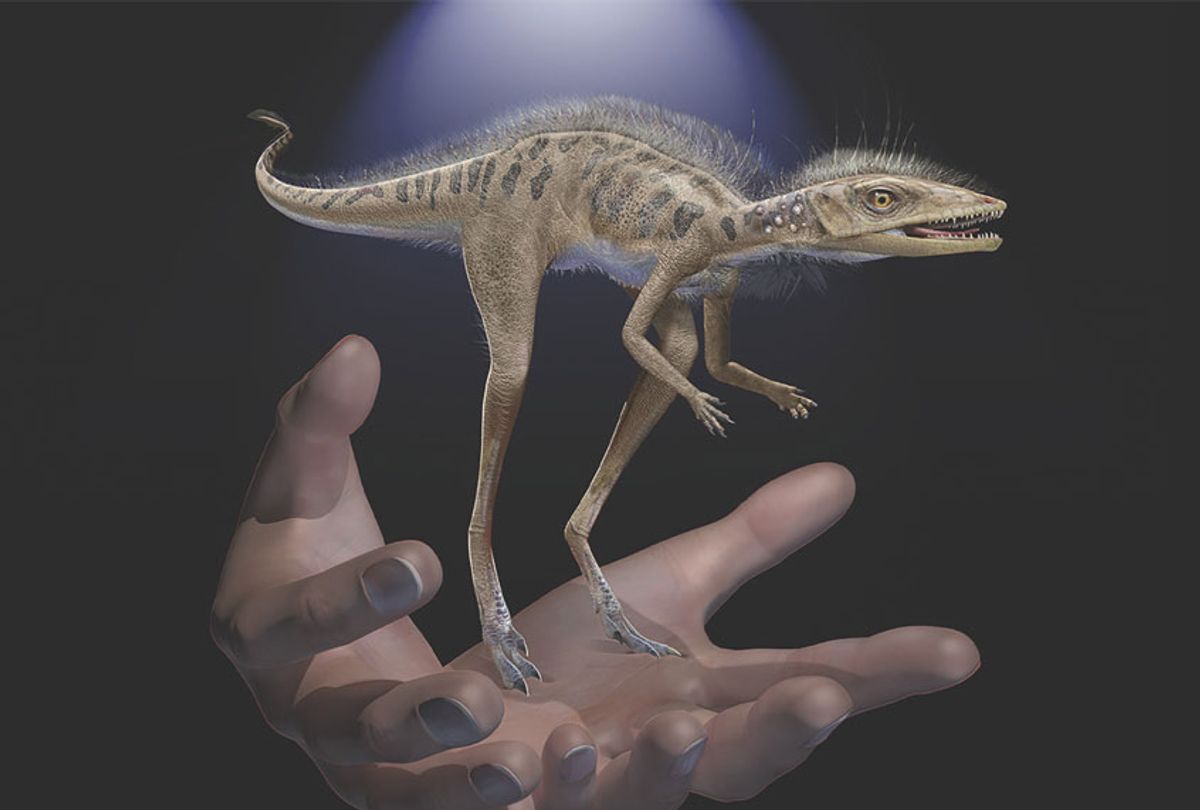 Life restoration of Kongonaphon kely, a newly described reptile near the ancestry of dinosaurs and pterosaurs, shown to scale with human hands. The fossils of Kongonaphon were found in Triassic (~237 million years ago) rocks in southwestern Madagascar and demonstrate the existence of remarkably small animals along the dinosaurian stem (Frank Ippolito/American Museum of Natural History)
--

A new study suggests that a small reptile from 237 million years ago, nicknamed the "tiny bug slayer," may be the direct ancestor of the massive dinosaurs and pterosaurs that came later.

"You probably know what a dinosaur is and probably have an idea that they're these gigantic prehistoric creatures," Christian F. Kammerer, a co-author of the study who works as a research curator in the paleontology unit at the North Carolina Museum of Natural Sciences, told Salon. "That isn't entirely accurate, but it is true that many of them were very large — indeed, the largest animals on land that have ever existed. The origins of dinosaurs and their close relatives, the flying pterosaurs, are currently very mysterious because of the historical lack of research in the Triassic period." The Triassic period is the first and shortest period in the Mesozoic era, or the Age of Reptiles, and both began and ended due to major extinction events.

The study attempts to put a new spin on the Triassic period by positing that the evolutionary antecedent to future dinosaurs was literally quite small.

"Although dinosaurs and gigantism are practically synonymous, an analysis of body size evolution in dinosaurs and other archosaurs in the context of this taxon and related forms demonstrates that the earliest-diverging members of the group may have been smaller than previously thought, and that a profound miniaturization event occurred near the base of the avian stem lineage," the abstract explains.

The "tiny bug slayer" in question, which was discovered and studied by Kammerer and the group in Madagascar, is named Kongonaphon kely and is part of the group Ornithodira, which also includes dinosaurs and pterosaurs. It is so named both because it stood only 10 centimeters tall (roughly four inches) and because its diet primarily consisted of insects.

Kammerer elaborated on that to Salon.

"It seems like the largest land animals that ever existed actually evolved from remarkably small reptiles, even for their time," Kammerer told Salon. "The other reptiles that it was coexisting were substantially larger and were the top predators and large herbivores at the time. The dinosaur ancestors were really quite minor components of the ecosystem."

Kammerer also discussed the factors that have caused a new wave of paleontological research to come out of Madagascar.

"A lot of those studies are happening in the southern hemisphere in countries where there are not necessarily hundreds and hundreds of years of paleontological activity, as a result of the legacies of colonialism and things of that nature," Kammerer explained. "One site that my co-authors have been working in in the last 20 years has been in Madagascar. In southwestern Madagascar in the nineties, my collaborators started working on what turned out to be a very fossil rich fauna, an assemblage of middle-to-late Triassic animals. So these are things living around 237 million years ago that proceeds the earliest known dinosaurs by a few million years."

John Flynn, the Frick curator of fossil mammals at the American Museum of Natural History who worked at The Field Museum at the time the fossils of Kongonaphon were discovered in 1998, elaborated to Science Daily about the incredible fossil work being done in Madagascar.

"This fossil site in southwestern Madagascar from a poorly known time interval globally has produced some amazing fossils, and this tiny specimen was jumbled in among the hundreds we've collected from the site over the years," Flynn said. "It took some time before we could focus on these bones, but once we did, it was clear we had something unique and worth a closer look. This is a great case for why field discoveries — combined with modern technology to analyze the fossils recovered — is still so important."