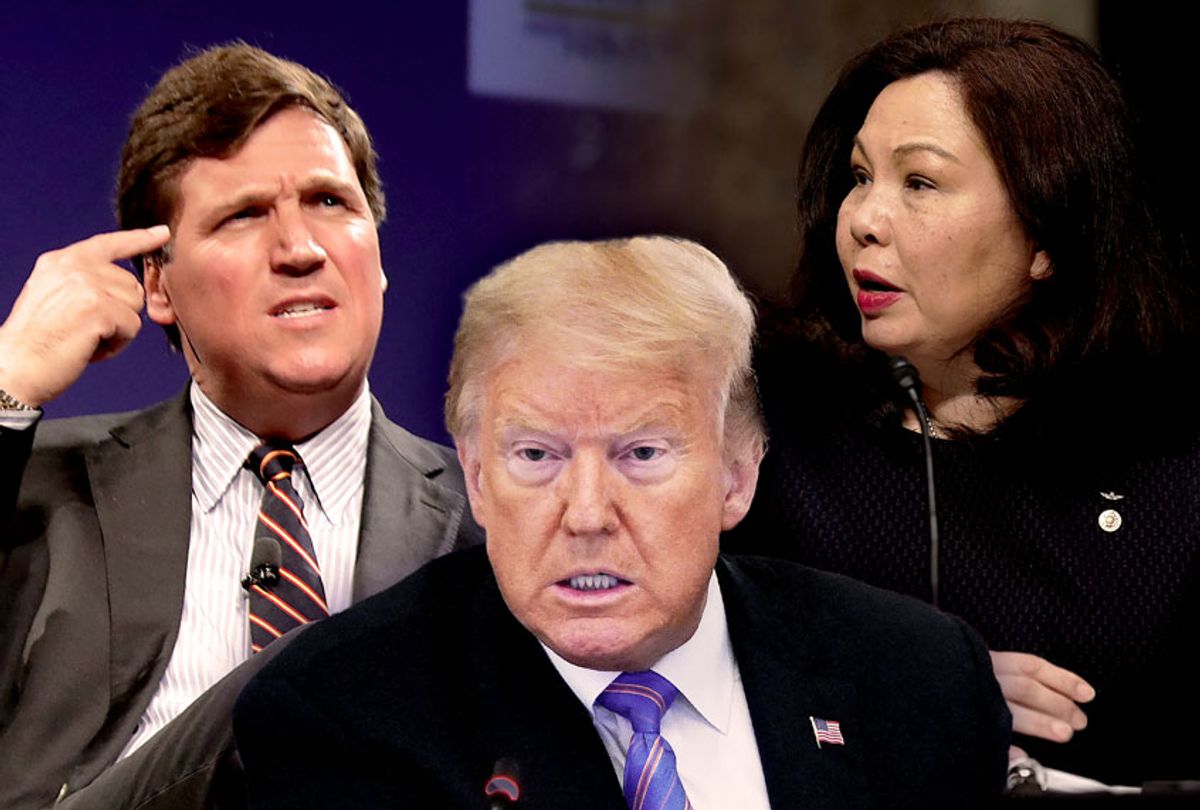 Duckworth, an Iraq veteran of Asian descent who was awarded the Purple Heart after losing both her legs when her helicopter was shot down in 2004, hit back at Carlson's claim that she "hates America" after she expressed an openness to a "national dialogue" about removing statues of George Washington. (She personally opposes this.)

Duckworth, whose ancestors fought in the American Revolution, slammed Carlson and Trump on Thursday for "questioning my love for the country I went to war to protect, using words I never actually said and ascribing a position to me that I do not actually hold."

"Carlson disingenuously claimed that because I expressed an openness to 'a national dialogue' about our founders' complex legacies, people like me 'actually hate America,'" she wrote. "One night later, he claimed that I called George Washington a traitor even though I had unambiguously answered no when asked whether anyone could justify saying that he was. Then he argued that changes to monuments of our founders 'deserve a debate,' which, somehow, was different and more acceptable to him than the 'national dialogue' that led him to question my patriotism just 24 hours earlier."

Duckworth said she does not "want George Washington's statue to be pulled down any more than I want the Purple Heart that he established be rippled off my chest."

The Trump campaign shared the segment in which Carlson attacked Duckworth on its social media accounts.

"But what I actually said isn't the reason Mr. Carlson and Mr. Trump are questioning my patriotism, nor is it why they're using the same racist insults against me that have been slung my way time and again in years past, though they have never worked on me," she wrote. "They're doing it because they're desperate for America's attention to be on anything other than Donald Trump's failure to lead our nation, and because they think that Mr. Trump's electoral prospects will be better if they can turn us against one another."

Duckworth suggested that Trump was using the issue to distract from the mounting COVID-19 death toll, as well as the fact that "this failed commander in chief has still apparently done nothing about reports of Russia putting bounties on the heads of American troops in Afghanistan."

Trump and Carlson are "self-serving, insecure men who can't tell the difference between true patriotism and hateful nationalism," she said.

"The hateful vision for America parroted by Mr. Trump and Mr. Carlson will not win," Duckworth added. "Their relentless efforts to drive wedges between us will not work forever."

Her response came after Carlson attacked the senator's patriotism over her comments about statues.

"Well, it's long been considered out of bounds to question a person's patriotism. It's a very strong charge and we try not ever to make it," the Fox News host said. "But in the face of all of this, the conclusion can't be avoided: These people actually hate America. There's no longer a question about that."

Duckworth responded by urging Carlson to "walk a mile in my legs, and then tell me whether or not I love America."

The next day, Carlson called Duckworth a "coward," a "fraud" and a "moron" during a segment which many suggested had echoed white supremacist propaganda.

"I can't tell you how I felt today when I heard the president of the United States, Donald Trump, questioning your patriotism. I found it virtually disgusting, sickening," Biden told Duckworth on Tuesday during a joint appearance. "It's a reflection of the depravity of what's going on in the White House right now."

The attacks "will never diminish my love for this country — or my willingness to sacrifice for it so they don't have to," Duckworth wrote in the op-ed. "These titanium legs don't buckle."