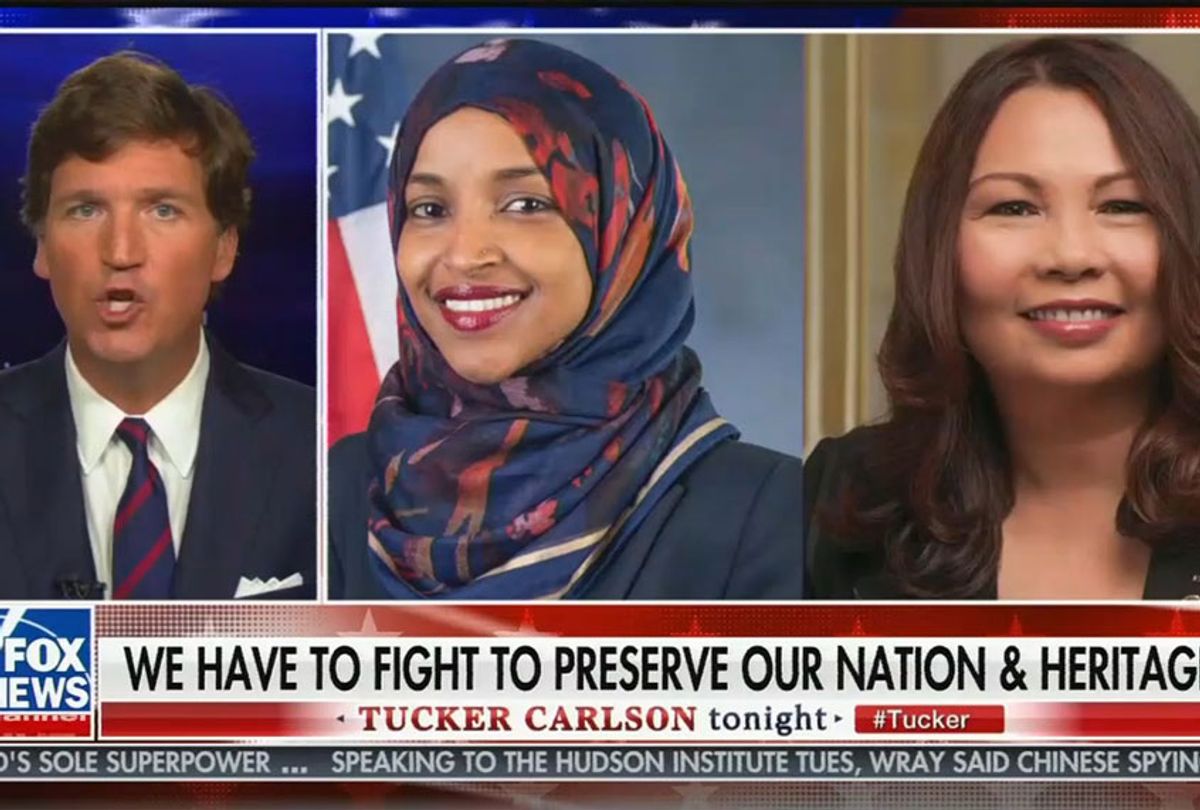 Twitter users widely circulated a screenshot of a chyron which aired on Carlson's show below images for Sen. Tammy Duckworth, D-Ill., who is of Asian descent, and Rep. Ilhan Omar, D-Minn., who is one of the first Muslim women elected to Congress.

"We have to fight to preserve our nation & heritage," the chyron read.

Many journalists pointed out the phrase was similar to the infamous white supremacist "14 words" slogan: "We must secure the existence of our people and a future for white children."

"I guess the @FoxNews graphics producer who handled the segment had to tell [Carlson] that the chyron didn't have room for all 14 words," White House reporter Andrew Feinberg tweeted.

The chyron aired as Carlson ratcheted up his attacks on Duckworth, an Iraq War veteran who earned the Purple Heart after losing both her legs in a rocket-propelled grenade attack, and Democrats calling for the removal of the Confederate flag and Confederate statues.

Carlson went on the attack after Duckworth argued that President Donald Trump should not be honoring "dead traitors" who fought for the Confederacy.

Duckworth told Carlson to "walk a mile in my legs" after he claimed that she and others calling for the removal of the statues "actually hate America."

Carlson doubled down on his attacks on Tuesday, calling the veteran a "coward," a "fraud" and a "moron."

"George Washington was a genuinely great man," he said. "But to morons like Tammy Duckworth, Washington was just some old white guy who needs to be erased."

The Fox News host then brought up Omar as he argued that Confederate supporters "have every right to fight to preserve our nation and our heritage and our culture" from "vandals like Tammy Duckworth and Ilhan Omar."

"We live here," he said. "We don't want to destroy it. We have every right to fight to preserve our nation, and our heritage and our culture."

Duckworth's family has served in the military as far back as the American Revolution.

"My family fought for our nation's independence alongside George Washington & I'm a proud member of [the Daughters of the American Revolution," Duckworth said after President Donald Trump's team circulated Carlson's talking points.

Duckworth has increasingly been mentioned as a potential running mate to Biden, and the former vice president defended the senator against Carlson's attacks.

"I can't tell you how I felt today when I heard the president of the United States, Donald Trump, questioning your patriotism. I found it virtually disgusting, sickening," Biden told Duckworth on Tuesday during a joint fundraiser. "It's a reflection of the depravity of what's going on in the White House right now."

"Tucker Carlson and his colleagues who traffic in hate speech masquerading as journalism are accomplices to Donald Trump's perverse mission to use division and bitterness to tear this country apart," Biden campaign spokesman T.J. Ducklo added.

Carlson has long pushed white nationalist talking points on his show, leading major advertisers like Disney and T-Mobile to pull their spots off his show. Though Carlson's show has the highest ratings in cable news, MyPillow, a company owned by Trump supporter Mike Lindell, now provides nearly 40% of all the advertising revenue on his show after other advertisers pulled out, according to data from TV advertising data firm iSpot.tv.