Tucker Carlson's white supremacy is no "hoax": How the Fox News star masks his hate in populism 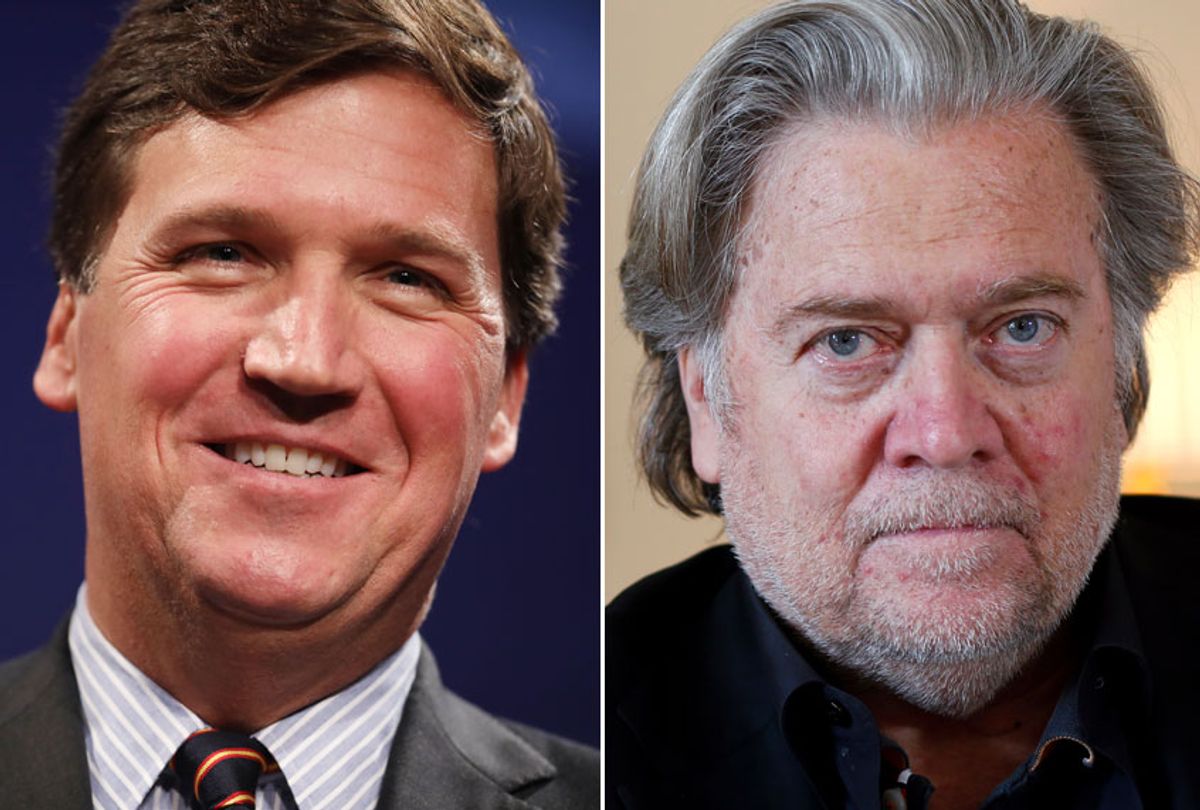 After several days of controversy over his insistence that white supremacy in America is a hoax, Fox News superstar Tucker Carlson is tired. He announced on Wednesday night that he'd be going fishing for a few days. Fox News insists that this was a scheduled vacation but as CNN's Oliver Darcy notes, Fox News hosts who start dumpster fires often "take a few days off" when advertisers' customers feel they've gone too far and the boys in the boardroom start to feel too much heat. In the case of Bill O'Reilly, he abruptly went away on "vacation" one day and never returned.

It's unknown whether Carlson will be back next week. According to the Hollywood Reporter, after he said last December that immigrants made America "dirtier" he lost 26 sponsors. They speculate that he won't lose his job over this latest controversy because his show now depends upon smaller direct-marketing companies which are unlikely to flee.  We'll know soon enough.

But it's possible that part of the reason he was sent off to the woods is something that goes beyond his insistence that White Supremacy is a hoax. As much as people are rightly laying responsibility for much of the philosophy and rhetoric that clearly motivated the El Paso killer at the feet of the president, it's important to remember where Trump gets many of his talking points: Fox News.

Anyone who has tuned into their evening lineup over the past couple of years knows that the language in the shooter's online screed could have come from the mouths of any number of the network's stars. But the only one who has been spouting the specific ideological mix that motivated the killer is Tucker Carlson.

Media Matters cataloged some of the xenophobic and racist rhetoric of the most vociferous anti-immigrant pundits on Fox News:

And USA Today analyzed the president's speeches since 2017 and found that he has "used the words 'predator,' 'invasion,' 'alien,' 'killer,' 'criminal' and 'animal' at his rallies while discussing immigration more than 500 times. But for all of the degrading language he's deployed against immigrants and people of color, Trump has failed to adopt a very specific term that seemed defined the thesis of the El Paso shooter's screed: "replacement." However, if you watched that video above, you'll have noticed that it's used frequently on Fox News, particularly by Carlson.

It stands to reason that Trump wouldn't have picked that up. It's much too cerebral for him. After all, he didn't understand that when the Charlottesville Nazis chanted "Jews will not replace us" they were talking about his own beloved daughter and son-in-law. He has no intellectual understanding of the white supremacist movement. He's simply an old-school racist without any need for an underlying philosophy to justify it.

But the "Great Replacement" theory is a big deal among white nationalists worldwide. Essentially it comes down to two intersecting ideas. They believe that "the west" is threatened by immigrants from non-white countries resulting in white people being "replaced." And the whole thing is part of a secret Jewish conspiracy to rule a one-race world. The Fox News "mainstream" American version doesn't fully embrace the second idea, at least not publicly. But they are all-in on the first one, cleverly couching it in partisan political terms as a Democratic Party strategy to deny Republicans (who are, as we all know, nearly all white) their God-given right to be a majority of this country.

Since the massacre last weekend some people on the right have been saying the shooter couldn't really be considered a person of the right because he criticized corporations and had concerns about the environment. They must not have been paying attention to Tucker Carlson. Of all the Fox News personalities who harp on immigration, he is the one with the most sophisticated white nationalist ideology. His ideas fall much more in line with the new strain of right-wing "populism" of Hungarian Prime Minister Viktor Orbán and former Trump adviser Steve Bannon than David Duke (although the latter is a big fan.)

In a nutshell, they see anti-corporatism and environmentalism as necessary to save Western civilization, not because corporations are sucking the life from working people and killing the planet but because corporations and climate change are creating conditions that make brown and back people migrate to countries with predominantly white populations. And among the "ecofascist" alt-right and the neo-Nazis, environmentalism is based upon reverence for "the land of your people" which explains the Charlottesville marchers chanting the Nazi slogan "Blood and Soil." Carlson hasn't gone that far but these people are all walking in the same direction.

At the recent National Conservatism Conference, Carlson gave the keynote speech in which he made it clear that he believes the future of the Republican Party lies in adopting his right-wing populist agenda as a way to gain support for anti-immigration policies. He's quite clever about it. He rails against the corporations for kowtowing to leftist advocacy:

Somewhere in the late 1990s, corporate America realized this. They learned that if they did the bidding of the left on social issues, they would get a pass on everything else. They could freeze wages. They could destroy the environment. They could strangle free speech. They can eliminate privacy. In general, they could make public life much worse.

And his agenda to have women leave the workforce and stay home to have more children is presented as an anti-corporate, big-government benefit proposed by Elizabeth Warren to allow women to throw off the yoke of corporate tyranny.  In reality, it's yet another Orbán policy designed to boost the native population so that immigrant labor is no longer necessary. We know this because Carlson has said as much:

[Y]ou are saying our low birthrates are a justification for immigration. I'm saying our low birthrates are a tragedy that say something awful about the economy and the selfish stupidity of our leaders. I'm not demonizing anybody. I'm not against the immigrants. I'm just, I'm for the Americans. Nobody cares about them. It's like, shut up, you're dying, we're gonna replace you.

There have been no confirmed reports that the El Paso killer ever watched Fox News. Most young people don't. And there is plenty of access to this extremist ideology online. But had he tuned in on any given night to Tucker Carlson's show he could have heard all of the ideas he said in his screed were motivation for his deadly acts. Carlson has been mainstreaming that killer's ideology for years now:

The rub: 80% Dems, 67% of indies, but only 36% of Repubs say growth of nonwhite population will be positive change. 61% of Repubs believe shift to being a majority-nonwhite country will be a mostly negative development. https://t.co/KX9PuAAFve via @prripoll