The fallout from the 2019 fire can be seen in soil samples along the path of the smoke plume, researchers find 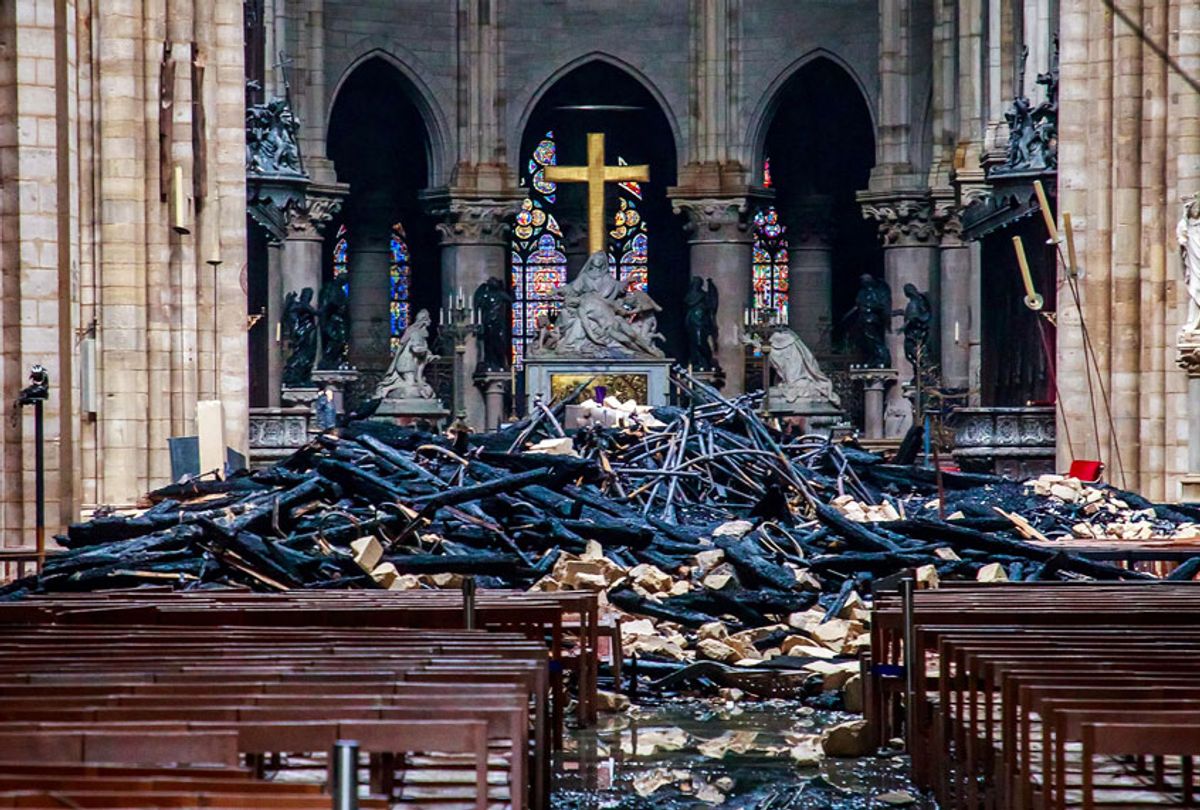 This general view shows debris inside the Notre-Dame-de Paris Cathedral in Paris on April 16, 2019, a day after a fire that devastated the building in the centre of the French capital. (CHRISTOPHE PETIT TESSON/AFP via Getty Images)
--

Though lead is no longer a primary component in construction, pre-modern buildings are full of it. Hence, experts believed that some lead had been sent into the Paris sky amid the plumes of smoke emanating from the 2019 fire that torched Notre Dame cathedral.

What they didn't know was precisely how much of the toxic metal had escaped into the environment, and how much of a risk it posed to humans.

Now, a new study, which was published in the journal GeoHealth, has put a more precise number on exactly how much lead contamination was spread through Paris, and where. The study's four co-authors estimate that almost one ton of lead dust dropped down within one kilometer (0.6 miles) of the site of the cathedral fire. In addition, areas that were downwind of the smoke plume had twice as much lead as those that did not fall within the smoke plume's path.

"There were almost 500 tons of lead on the roof of the burning cathedral, and so there was a concern," Alexander van Geen, a geochemist at Columbia University's Lamont-Doherty Earth Observatory and lead author on the new study, told Salon. "There was a government report that looked at the long range transport of lead and estimated maybe about 150 kilograms was transported beyond one kilometer. And what we are adding is that we quantified how much was deposited between 100 meters and one kilometer of the cathedral, so further in from the previous study. And those levels in the surface soil were not super high.

The researchers wrote in their abstract that the concentration of lead in soil "downwind of the cathedral" was around 430 milligrams per kilogram, which they note is "double the average [lead] concentration in the other directions."

"The consequences of the Notre-Dame ﬁre are well worth documenting because lead has neurotoxic effects even at low levels of exposure at a young age," van Geen and the other three researchers write.

Fortunately, Van Geen told Salon that today the current soil lead levels "don't pose a huge threat" and that "they are considerably lower than you'd see in a backyard in Brooklyn." He argued that the main contribution of the study is that it draws attention to the precise path of contamination. "If you consider that ton of lead, that means that dust deposited in houses, including where small children are living, was elevated probably within that one kilometer radius downwind of the cathedral.... And so that I think is something that was temporary," he explained.

Speaking to Science Daily, van Geen explained how the process of conducting the study caused many Parisians to give him odd looks.

"It wasn't a particularly glamorous expedition," Van Geen explained. "I got plenty of strange looks from people wondering why this old guy was scooping up soil, trying to avoid the dog poop, and putting some of the soil in paper bags. But it got done."

Van Geen concluded, "There is no indication that lead levels in children went up a lot, but it's also true that there hasn't been that much monitoring immediately after the fire, and that's what we were try to bring to people's attention to."

When the Notre Dame Cathedral began to burn down last year, NBC News correspondent Anne Thompson famously remarked that it was "like a dagger to the heart of Paris." Paris Mayor Anne Hidalgo tweeted then: "A terrible fire is underway at Notre Dame Cathedral. The fire brigade are trying to control the fire. We are mobilized locally in close connection with church authorities. I ask everyone to respect the security perimeter."

The cathedral was built in the 13th century and is widely admired for its architecture as well as its religious significance, quickly emerging as one of the most popular tourist attractions in Paris. It is currently being slowly rebuilt with the help of historical experts.