Life after layoffs: How empanadas gave me a sense of belonging

On finding the perfect empanada dough, fulfillment in work, and acceptance by local Peruvian mamás. 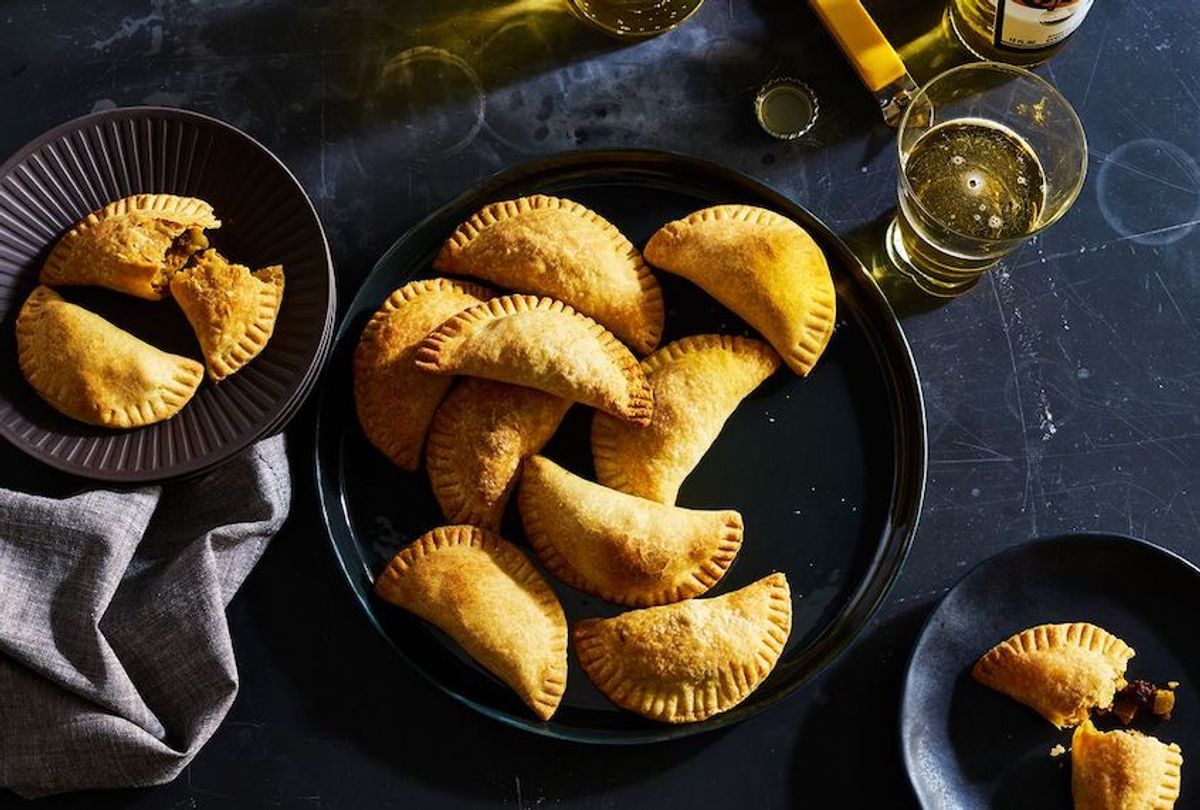 When COVID-19 reached the United States, I was working full time as an in-house content writer for a company that was about to launch a credit card review website. I kept coming into work each day feeling secure that this pandemic surely wouldn't affect the industry I worked in. It wasn't long before human resources decided that I, along with other creative team members, were costing the company too much in the midst of this health crisis and dismissed us.

I drove home, thinking about what I was going to do. It felt as though something greater than myself took over, and I made a detour to my favorite Latino grocery store. I felt myself guided towards the ingredients I needed to make Peruvian-style empanadas: a cartload of red onions, a big hunk of beef eye round (what is referred to as "boliche"), butter, lard, ají amarillo chilies, cumin, and oregano. I loaded my trunk with the groceries, pulled out my phone, and announced to my social media followers that I had just gotten laid off and would be selling Peruvian empanadas that week.

There was only one problem: I realized that I didn't quite know how to make Peruvian empanadas yet.

All I had were my taste memories — the perfect buttery, crumbly crust and moist beef fillings I had tried in Lima — and various, lackluster attempts at home. In the past, I had thrown out more botched turnovers than I'd like to admit — crusts that exploded in the oven, fillings that were too soupy and leaked all over the baking tray. Empanadas weren't something I wasn't quite comfortable serving to guests, much less selling for profit. What was I thinking?

I assumed I would get a handful of orders from supportive friends, and that I'd maybe sell a dozen of these tender meat pies by the end of the week. But the next morning I woke up to find more orders than I had ingredients for.

It then dawned on me that whoever or whatever took over me when I decided to start selling empanadas was a genius. (Or maybe I was the genius and needed to give myself more credit.)

All my life, I've had dreams of owning a small food business, but I never knew what to sell. I didn't know what food — signature dish, let alone cuisine — I could call mine. Miami is a major hub for Peruvian immigrants, and while my birth country's cuisine is extremely popular with locals, there is also a lot of competition. I couldn't simply cook Peru's greatest culinary hits and expect to make a mark. There were already dozens of my compatriots doing the same thing, and they had a lot more experience and resources to work with.

But, I realized there weren't that many purveyors of Peruvian-style empanadas around me. These are unique in Latin America in that the crust is crumbly, buttery, and melts in your mouth much like shortbread. In fact, there were only two Peruvian bakeries in the tri-county area that I knew of, and I wasn't a big fan of either bakery's empanadas — the fillings were dry, and one bakery's crust reminded me of a soggy fast food biscuit. I wanted to make the empanadas that I wanted to eat — ones with delicate crusts made with good quality butter and lard (instead of margarine and shortening) and juicy, savory fillings.

Miami's population is roughly 65 percent Latino, obsessed with any type of savory hand pie, and — like much of the world — has been quarantined for months. I was offering an injection of excitement into their diet and free delivery to almost anywhere in my corner of Florida. I started finding myself busier than when I was employed; in early June, I even purchased a second refrigerator to keep up with the orders.

Perhaps the biggest revelation has been the amount of satisfaction I could derive from work. Few things compare to having a complete stranger purchase something you create week after week, and tell you how your food brings them pleasure during such a dreary time.

As someone who is bi-cultural, I've never felt wholly accepted. The Anglo-American community to which my mother belongs could never accept anyone named Carlos; the Peruvian-American community welcomes me tepidly, but my accent and the fact I grew up in the U.S. keep me from being seen as Peruvian. After 30 years of living in America, I finally found that sense of belonging: a Peruvian customer's mamá — herself a caterer — called to commend me on my empanadas.

I have tried adding some fusion dishes to my menu as a nod to my multicultural upbringing — I was particularly proud of a Peruvian riff on pimento cheese sandwiches — but my customers wouldn't even consider it. They wanted the foods that reminded them of home, and that's what made me truly Peruvian in their eyes.

I named my budding business 3 Coronas ("corona" means crown in Spanish). The name is a tribute to not only the city where I was born — Lima, the Thrice Crowned City of Kings — but these very strange times, in which I, very strangely, found myself.