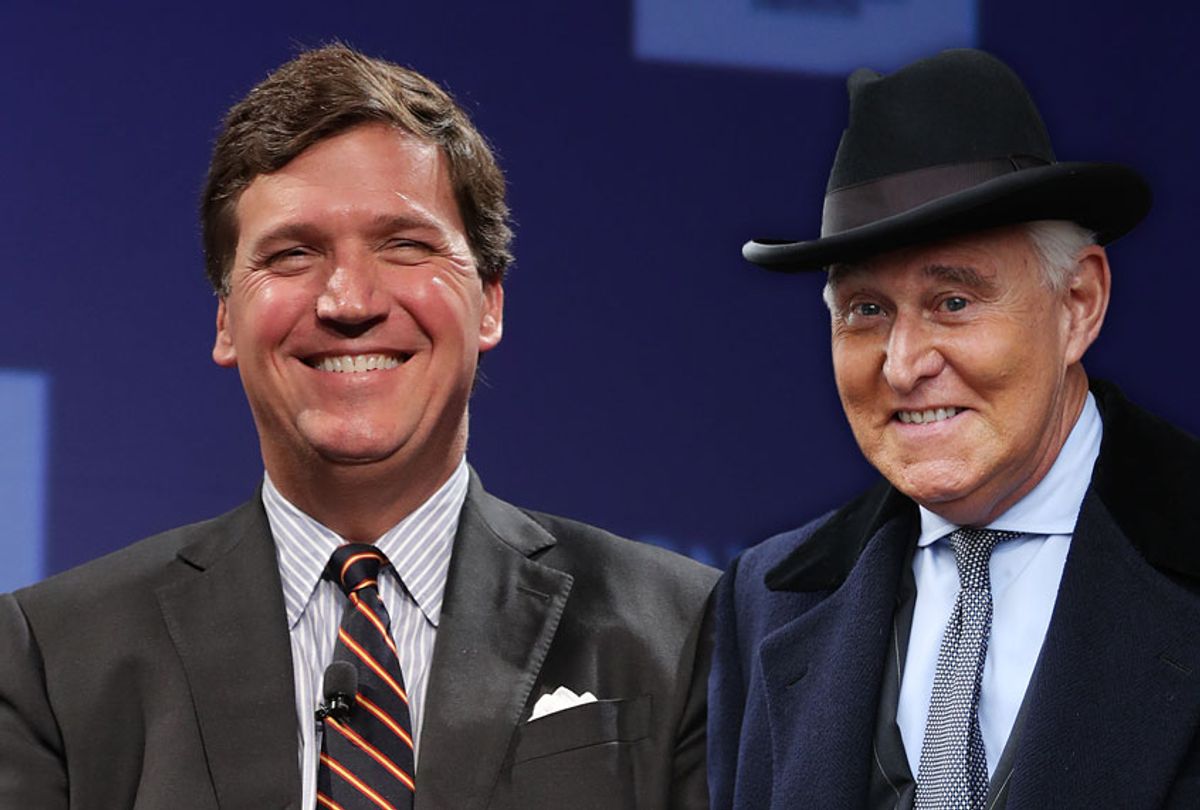 For his first interview since the commutation, Stone sat down with Carlson's Fox News colleague Sean Hannity. He thanked a number of individuals in the same manner in which one does after receiving an award. Stone praised Rep. Matt Gaetz, R-Fla., convicted former New York police chief Bernie Kerik and conservative activist Charlie Kirk for raising doubts about his sentence ahead of Trump's decision.

"I have to really single out your Fox News colleague Tucker Carlson," Stone told Hannity. "He took up the cudgels early. He stayed on this case with every twist and turn — wasn't afraid to take on the judge, laid out the jury question, encouraged me when I got discouraged. He's a man of incredible loyalty, and he's a great friend. He may be the best friend a man can have, so my hat's off to him."

"I really want to thank God," he later added, "because I was literally hours away from being sent to a COVID-infested prison."

Stone was scheduled to begin his 40-month prison stint this week after he was convicted of seven felonies, including lying to Congress and witness tampering. But the self-proclaimed dirty trickster waged a monthslong campaign to pressure Trump to grant him clemency.

"He knows I was under enormous pressure to turn on him," Stone told NBC News' Howard Fineman ahead of the commutation. "It would have eased my situation considerably, but I didn't."

Carlson had long championed Stone's cause, "offering up a steady stream of segments framing Stone as a victim of anti-Trump law-enforcement run amok and explicitly advocating for the president's intervention," The Daily Beast reported earlier this year.

"There was no collusion. Stone is still looking at life in prison," Carlson said of Stone's three-year sentence in March. "Where is Roger Stone's pardon? His pardon from the president? Let's hope it comes very soon."

Stone's commutation drew a rare public statement from Mueller, who defended his investigation amid Trump's attacks.

"I feel compelled to respond both to broad claims that our investigation was illegitimate and our motives were improper, and to specific claims that Roger Stone was a victim of our office," he wrote in a Washington Post op-ed. "The Russia investigation was of paramount importance. Stone was prosecuted and convicted because he committed federal crimes. He remains a convicted felon, and rightly so."

Judge Amy Berman Jackson, who oversaw Stone's case, called on the Department of Justice to provide more clarity Monday about the scope of Stone's commutation. Hours later, the department made public Trump's order showing that the commutation included post-prison supervised release and fines levied by the court.

The order said that justice would not be served if Stone were "to remain confined to his home or serve the said sentence, and the safety of the community will not be compromised if he is released from home confinement and clemency is granted."

Trump's commutation came against the advice of Attorney General Bill Barr, according to NBC News. Though Barr led an intervention into the case to recommend a lower sentence for Stone than the one recommended by career prosecutors, which prompted the prosecuting team to quit the case, the attorney general defended the sentence which was ultimately handed down.

"I think the prosecution was righteous, and I think the sentence that the judge ultimately gave was fair," he told ABC News earlier this year.

Stone's comment that he was "under enormous pressure to turn on Trump" — but did not — and Trump's tweet quoting Stone vowing to "never testify against Trump" also prompted questions about Barr's remarks during his confirmation hearing last year.

"Do you believe a president could lawfully issue a pardon in exchange for the recipient's promise to not incriminate him?" Sen. Pat Leahy, D-Vt., asked Barr.

Stone denied any such arrangement to Hannity on Monday.

"Now, in the last two days when . . . people said, 'You see Stone had the goods on Trump and he traded his silence for commutation,' that is patently false," he said. "I never said that. I never implied that."

Andrew Weissman, who served as a lead prosecutor on Mueller's team, said that is exactly what happened.

Stone, he wrote in a New York Times op-ed, "got his reward for keeping his lips sealed."