How Arizona blew it: Experts say Gov. Doug Ducey did almost everything wrong

The Grand Canyon State is setting records in the coronavirus outbreak — in the worst way. Here's why 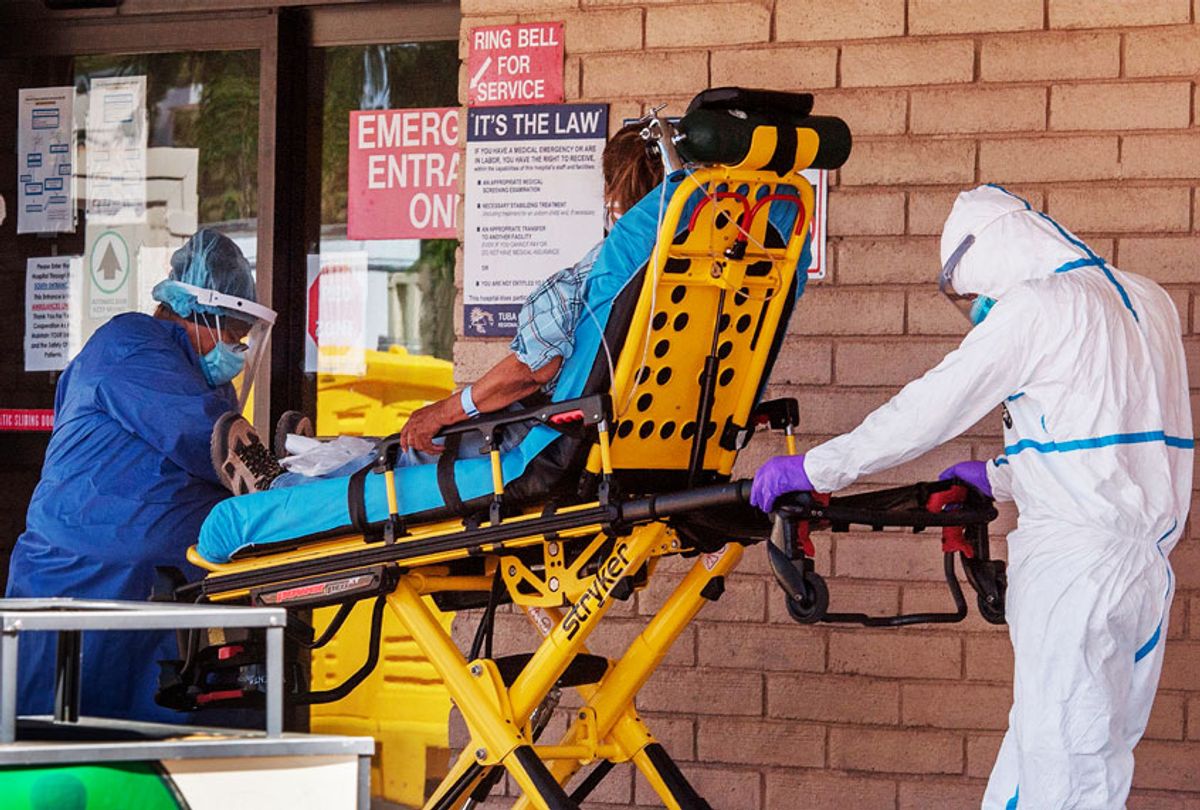 A patient is taken from an ambulance to the emergency room of a hospital in the Navajo Nation town of Tuba City, in Arizona (MARK RALSTON/AFP via Getty Images)
--

Even by the standards of the national pandemic spike, Arizona has a serious coronavirus problem.

On Monday morning the state's health department reported 1,357 new coronavirus cases, including eight additional deaths. It now has more cases per capita than any other state besides New Jersey, whose outbreak peaked months ago. Moreover, the rate at which new cases have been reported has surpassed the rate at which testing has been increased, which means the existing data almost certainly does not reflect the true extent of the outbreak.

Further complicating matters, Gov. Doug Ducey, a Republican, only authorized local governments to implement mask requirements on June 17 — and public health officials say it will take several weeks for the impact of those requirements to be evident. Ducey has also been criticized for personally setting a bad example after a photograph was published showing  him at a social event practicing neither distancing nor mask-wearing. (Ducey's office disputes the timeline involving when the photograph was taken.)

Arizona has also had a series of high-profile coronavirus cases. Last month a teacher in the state died after contracting the coronavirus while she was forced to share a classroom with two other teachers, both of whom also contracted the disease. On Monday a group of school board members and medical professionals signed an open letter to Ducey urging him to delay opening schools until at least October, citing concerns about the safety of both educators and students. (Officials in Phoenix, the state's largest city, has made clear public schools will be online-only as the fall term begins.)

Ducey was also called out in an impassioned obituary written by Kristin Urquiza, whose father, Mark Anthony Urquiza, died from COVID-19 last month.

"Mark, like so many others, should not have died from COVID-19," Urquiza wrote. "His death is due to the carelessness of the politicians who continue to jeopardize the health of brown bodies through a clear lack of leadership, refusal to acknowledge the severity of this crisis, and inability and unwillingness to give clear and decisive direction on how to minimize risk."

So what exactly has gone wrong in Arizona — and what can be done to make it right?

"It is impossible to say whether [Ducey] is ignoring advice, is unaware of it, or doesn't believe it," Dr. Elizabeth Jacobs, a professor of epidemiology and biostatistics at the University of Arizona, told Salon by email. "There have been numerous editorials published that have strongly recommended intensive actions, such as a statewide mandate on masking and improved testing speeds. The latest actions by the governor aim to increase testing capacity by the end of August. With considerations such as reopening schools and universities under discussion, this will not be soon enough. It is distressing that we do not have adequate testing in the state even now."

When asked about specific mistakes made by Arizona's government, Jacobs pointed to overly ambitious economic reopening that was too rapid, the lack of a statewide mandate on masking and incompetent or inadequate testing, which she described as "the biggest concern I have personally right now."

"We need rapid testing available to everyone, with testing sites equally distributed in all neighborhoods, regardless of socioeconomic status," Jacobs explained. "We need tests that are sensitive and specific, with rapid turnaround. We need supports in place for those who may be most vulnerable to COVID-19, such as our Native American Nations and among our Latinx population. We also need to ensure that legislation to protect individuals from evictions is renewed during this emergent epidemic, and that we provide financial support for those who are being hit hardest by social distancing." Jacobs also called for "sensible and reasonable recommendations" for school reopening and said that Arizonans need to know that authority figures "care about them and will be here to support them."

A recent poll suggests that Jacobs' views are held by a large number of her fellow Arizonans. A poll by the COVID-19 consortium found that Ducey has the lowest ranking among all American governors for his handling of the coronavirus crisis, and in fact is the only governor to rank below President Trump. (Ducey has a 32 percent approval rating compared to Trump's 34 percent approval rating.)

As of Sunday Arizona has reported 2,245 deaths a total of 122,467 cases. In an open letter to Ducey, the mayors of Flagstaff, Phoenix, Tempe, Tolleson and Tucson said that "our economy will not recover until we are able to slow the spread and rebuild consumer confidence. The longer we wait to act, the longer and more severe the blow to our economy will be, the longer it will take to safely send our children back to school, and more lives will be needlessly lost."

A recent article in Vox echoed some of these observations. As German Lopez wrote, Arizona's coronavirus spike "is the result, experts say, of Arizona's missteps at three crucial points in the pandemic. The state reacted too slowly to the coronavirus pandemic in March. As cases began to level off nationwide, officials moved too quickly to reopen in early and mid-May. As cases rose in the state in late May and then June, its leaders once again moved too slowly."

As Will Humble, executive director of the Arizona Public Health Association, told Vox, the state reopened too aggressively. "It was a free-for-all by May 15," Humble said, later adding that the state effectively "went from phase 0 to phase 3."

Unfortunately the errors made by Arizona's leaders are likely to have long-lasting consequences regardless of how the state tries to make up for things now.

"Even if I put in 100 percent face mask use and everybody complied with it in Arizona right now, there would still be weeks of pain," Cyrus Shahpar, a director at the global health advocacy group Resolve to Save Lives, told Vox. "There are people out there spreading disease, and it takes time [to pick them up as cases], from exposure to symptom onset to testing to getting the testing results."