Jeff Sessions' downfall: The wages of loyalty to Donald Trump is public humiliation 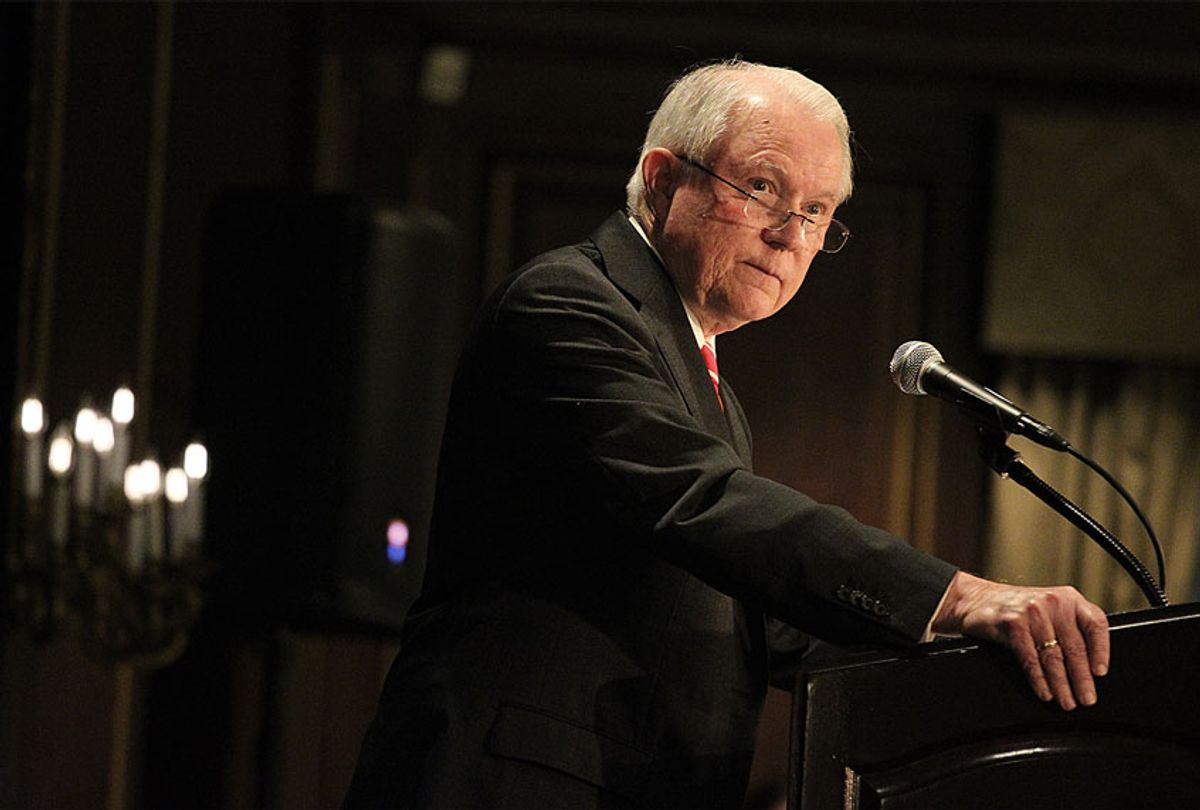 Former senator and disgraced former Attorney General Jeff Sessions has finally come, at age 73, to what is almost certainly the end of the road for his villainous political career. On Tuesday night, the right-wing Republican who served as a U.S. senator from 1997 to 2017 lost in his comeback attempt, defeated in the Republican primary for his old seat by Tommy Tuberville, a man whose cartoonish name better suited his previous career as head football coach at Auburn. The runoff election between the two wasn't even close, with the Riverboat Gambler (a silly and self-serious nickname for Tuberville, especially when "The Tubz" was right there for the taking) taking more than 60% of the vote.

It's tempting, since we're talking about Alabama, to believe that the Tubz (I can't help it) won on a wave of goodwill from the famously football-fanatical voters of that state. That fails to take into account that Tuberville may well be regarded as one of history's greatest monsters in the parts of the state that Roll Tide.

No, the reason that Tuberville won is likely due to something far more sinister than inappropriate of confidence in the governing skills of college football coaches: Alabama Republicans are hyper-loyal to Donald Trump, and Trump told them to vote for Tuberville.

But let us not shed tears for Sessions, for whom the phrase "hoisted by his own petard" may as well have been invented. In a world where so few evil people get any form of justice, we should allow ourselves the pleasure of laughing deeply, richly and at length at Sessions for this public humiliation. Sessions did this to himself. He, more than anyone else in power, invited Trump into our political system, and he knows exactly how Trump repays his loyalists: With a boot to the face and a laugh about what a simp you were to believe in him.

Sessions, one of the most racist members of Congress (which is saying something!), spent all his political capital on Trump early on in the 2016 Republican primary, correctly perceiving the New York real estate huckster and TV host as a vehicle to make the rest of the nation's politics as toxic and racism-inflected as politics in Alabama. Sessions was the first Republican senator to endorse Trump and campaigned fiercely for him, seeing Trump as the best possible avenue for white grievance politics and anti-immigrant bigotry even more central to the Republican Party than they already were.

There is no wiggle room here: Sessions, who was literally named after two Confederate leaders, fell madly in love with Trump because of racism. It's hard to imagine what else the two men have in common, but man, they both sure hate immigrants, black people and anyone else that David Duke wouldn't invite to a birthday party.

Not to re-litigate the 2017 battle that resulted in a thousand "nevertheless, she persisted" tattoos, but it is important to remember that's exactly what Sen. Elizabeth Warren of Massachusetts was persisting over: Her belief that a blatant white supremacist shouldn't be confirmed as attorney general, even if another blatant white supremacist, in this case the president, had nominated him.

Warren was trying to read into the public record a letter that civil rights activist Coretta Scott King wrote in 1986 to protest Sessions' nomination to a federal judgeship, on the grounds that he was a big ol' racist. Senate Majority Leader Mitch McConnell stopped her, because it's kind of hard to pretend your big ol' racist Attorney General is not a big ol' racist when he was too racist 31 years earlier to get confirmed to the federal bench.

King accused Sessions of using "the awesome powers of his office in a shabby attempt to intimidate and frighten elderly black voters," by launching frivolous criminal investigations aimed at preventing Black people from voting, or punishing them for doing so.

More racist stuff about Sessions, much of it revealed in 1986, resurfaced when Trump nominated him as attorney general: He called the NAACP "un-American." He said he was "okay" with the Ku Klux Klan "until I learned they smoked pot." (The context here was that Sessions was investigating what looked quite like a Klan lynching of a Black man he acknowledged had done nothing but "go to the 7-Eleven.") He said that the NAACP "hates white people" and is "a pinko organization."

He was also accused of calling a Black colleague "boy" and telling him, "You ought to be careful as to what you say to white folks."

But like most love affairs gone wrong, after Sessions and Trump consummated their white supremacist passions, they began to realize that they disagreed on other critical issues where everyone needs to be on the same page for the relationship to continue.

In this case, the conflict point was over how best to cover up the shady dealings Trump's campaign had with Russian intelligence figures who conspired to interfere with the 2016 election on Trump's behalf. Trump felt that the cover-ups should be flagrant and shameless, and wanted Sessions to do whatever he could, right out in public, to shut down the investigation into potential criminal conspiracy. (He wanted Sessions to "un-recuse" himself from the Russia investigation and fire special counsel Robert Mueller, since Trump was too chicken to do that himself.) Sessions preferred a more subtle method, publicly backing away from the Russia question and claiming to have clean hands, even as the administration's obstruction of justice successfully rendered the Mueller the investigation incomplete.

The irony is that Sessions' instincts on how to use power to get away with crimes and corruption were proved correct. By observing legalistic norms and recusing himself, Sessions was able to put a stamp of legitimacy on the investigation, and lulled the public into believing it was less of a damning indictment of Trump than it actually was. It wasn't until the next big crime involving a former Soviet nation, this time Ukraine, that Trump was impeached.

But Trump, ever a black hole for personal validation, cares less about what's actually best for him and far more for making his monkeys dance as hard as they can to prove they love him. The fact Sessions had self-interested reasons for playing his cards as he did — recusal allowed him to maintain an image of lawyerly respectability and professionalism — offended Trump greatly. He needs his underlings to sacrifice everything for him, including and especially any remaining dignity or reputational goodwill. Nothing but total self-immolation will be considered a good enough demonstration of your loyalty to Donald Trump.

No matter how much butt-licking and self-effacement Sessions performed after the recusal, Trump never got over the fact that, for one brief moment, Sessions was willing to put pragmatic concerns and his own reputation over Trump's yawning need to see people debase themselves before him. So he hounded Sessions out of the Justice Department — firing him shortly after the Democrats' sweeping victory in the 2018 midterms — and has talked trash about him ever since. He enthusiastically endorsed Tuberville, not because he's some huge Auburn fan or particularly cares about whatever differences exist between the two Alabama Republicans, but because he was fixated on letting Sessions know that there's no such thing as walking away from Trump with your dignity intact.

There should be a lesson for this in everyone who thinks it might be good for their career to work for Donald Trump. Anyone who would think that can't be appealed to on moral grounds, as they don't have any of those. But they need to understand that Trump expects — nay, demands — their total humiliation. He needs their destruction, craves it, and will not stop until he is satisfied. He is a predator who lives on consuming the professional careers of those he comes in contact with, a vampire whose life is sustained by sucking dry the reputations of the people around him. Trump's ego demands that any contact with him will result in your total destruction, for that is the only way he can feel alive. The only people who survive contact are those, like Roger Stone or current Attorney General Bill Barr, who are themselves undead and therefore have no remaining soul or substance for Trump to feast upon.

The fate of Jeff Sessions should be a warning to anyone who thinks there's such thing as working with Trump and walking away with any part of you undemolished. It doesn't work that way. He will drain you and leave a desiccated corpse where your reputation used to be. As puny a reputation as Sessions had before he made his deal with the devil, now he's got nothing.