Trump's agreement to look the other way on Putin's dark deeds is nothing new — remember the Mueller report? 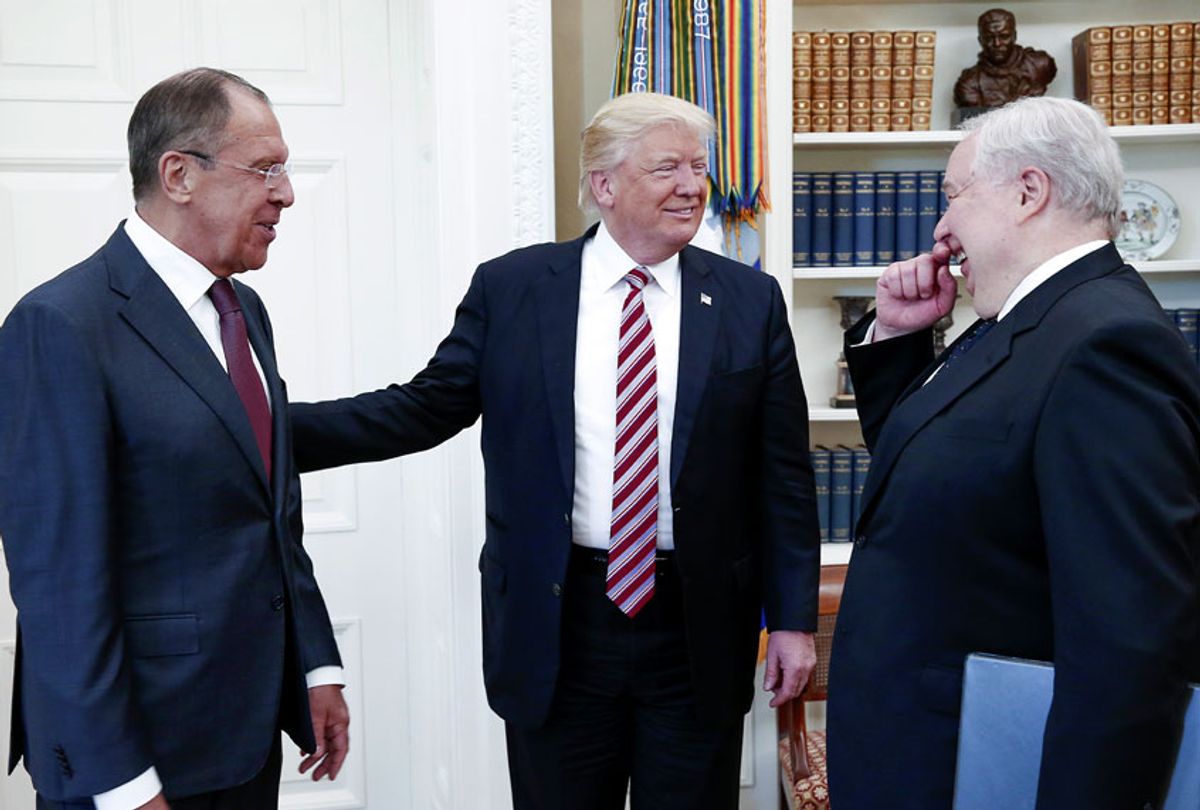 Russia's Foreign Minister Sergei Lavrov, US President Donald Trump, and Russian Ambassador to the United States Sergei Kislyak (L-R) talking during a meeting in the Oval Office at the White House. (Alexander Shcherbak\TASS via Getty Images)
--

Although Donald Trump now claims the whole thing is a "hoax" — his favorite term to discredit any story that's true — the president was clearly told by intelligence officials that Russia was paying bounties to Afghan fighters to kill American troops. Over the weekend, the New York Times reported that Trump was briefed and there was a large intra-agency meeting held by the National Security Council. When the White House denied that Trump had ever heard anything about this, sources came up with a date for the briefing: Feb. 27. Further reporting from the Associated Press indicates that Trump was shown an earlier version of this intelligence more than a year ago, and that then-national security adviser John Bolton personally briefed him in March 2019. Financial documents also back up the story, and the name of one Afghan middleman has surfaced.

Indeed, it's obvious Trump is lying about this is just from the fact that he's dismissing the entire story as a "hoax," even though his White House officials and Republican politicians are not contesting that these intelligence reports about Russian bounties actually exist. Yet Trump continues both to deny that he was briefed and also to claim, preposterously, "this is all a made up Fake News Media Hoax."

Whenever he labels a story a "hoax," it's usually a safe bet that it's true. For instance, he declared that concerns about the novel coronavirus were a "hoax," and now we've seen 130,000 deaths and nearly 3 million people infected. Throughout the impeachment process he claimed the whole thing was a "hoax," even though White House transcripts made clear he had tried to blackmail the Ukrainian president into smearing Joe Biden. And of course, Trump loved to yell about the "Russian hoax" in reference to extensive interference with the 2016 election and the Trump's campaign's extensive collusion with that conspiracy.

Because of the meat grinder that is our current political situation and because of Trump's wind-up doll repetition of "no collusion," a lot of folks, especially in the media, have forgotten that last point: While special counsel Robert Mueller didn't find actions that could be charged as criminal conspiracy on Trump's behalf, he found extensive collusion with that conspiracy, by both Trump himself and his campaign staff. Like anything else Trump calls a "hoax," the Russia collusion story was real — and very damning.

That matters right now, and indeed it always did. The current scandal about the Russian bounties — which is in the mix with other scandals, such as Trump's mishandling of the economic crisis and his non-decision to let the coronavirus wash over the country in a deadly wave and, oh yeah, the white supremacist stuff — goes right back to Trump's peculiar affection for Russia and its authoritarian leader, Vladimir Putin. It isn't just that Trump loves Putin and won't hear a bad word about Russia. It's that he has a long history, documented in the Mueller report, of inviting Russia to help him cheat in elections and making it clear that he would use his power to assist Putin's agenda in return.

In April 2019, the website Just Security put together a thorough analysis of the Mueller report and found that "it provides significant evidence that Trump Campaign associates coordinated with, cooperated with, encouraged, or gave support to the Russia/WikiLeaks election interference activities."

The amount of such activity — some might call it collusion — is dizzying. Trump's campaign chair, Paul Manafort, shared internal campaign data with a Russian spy. Deputy campaign manager Rick Gates was in the car with Trump when Trump got a call tipping him off to a WikiLeaks dump, which we now know involved emails stolen by Russian intelligence. Donald Trump Jr. and other campaign staffers took a meeting in Trump Tower to discuss what they clearly hoped was a chance to get deeper into the conspiracy. Behind the scenes, Trump Jr. encouraged the Russian conspiracy and tried to set up back channels in order to get more involved.

For their efforts, the Russians got some important love tokens from Trump and his campaign in return. Trump rewrote the Republican platform to remove language condemning Russian aggression toward Ukraine. Trump's first, and very short-lived, national security adviser, Michael Flynn, got in trouble during his time on the transition team by implicitly promising Russia that sanctions levied under Barack Obama, in response to the election interference, would be removed. Arguably, Trump's threat to pull military aid from Ukraine was just more of the same, as it served not just his interests but Putin's as well.

Mueller proved a "quid." There was a ton of evidence of the "quo." There just wasn't direct evidence of the "pro," so much as a lot of raised eyebrows and a mutual, if unspoken, understanding.

Remember that 34 individuals were indicted or convicted or pled guilty to crimes as a result of Mueller's investigation. Trump himself clearly committed multiple obstruction of justice crimes in his efforts to cover up the conspiracy, and it's somewhere between possible and likely that his obstruction successfully concealed more evidence of collusion or even outright conspiracy.

Most likely there wasn't an overt conspiracy because there didn't have to be. Trump understood he was getting illegal help from the Russians, and used his public platform repeatedly to indicate to let Moscow know they would feel his gratitude for their help. Furthermore, reading the Mueller report, one gets the impression that Russian spies looked into the possibility of more direct conspiracy with the Trump campaign, but when they witnessed what a bunch of incompetent amateurs they were dealing with, felt it was better to leave Trump and his family out of the loop with the conspiracy against the American people.

It's important to reiterate all these facts and analysis because it helps us understand what the hell is going on with this Russian bounty story. Trump is both grateful for the extensive and illegal help he got from the Russia in the 2016 election and hoping to get more such help in 2020. (Which he hasn't exactly been coy about.)

This history suggests that Trump may not be directly conspiring with Putin, but appears to have an unspoken understanding with the Russian president: Putin will give Trump campaign help and Trump will look the other way when Putin takes actions to undermine Western democracy.

As anyone with a Twitter account and a political opinion could tell you, Russia is upholding this end of this bargain, actively using social media to expose Americans to the same psy-ops that Putin has used against his own people for years.

This context helps us understand Trump's behavior, as well. A new report from CNN's Jim Sciutto paints a picture of Trump's attitude toward intelligence reports that have unfavorable information about Putin and Russia: He doesn't want to hear it, and has bullied and browbeaten officials so much that they've given up on offering him substantive intelligence about Russia's activities.

"The President has created an environment that dissuades, if not prohibits, the mentioning of any intelligence that isn't favorable to Russia," one official told Sciutto.

This isn't really that mysterious. Trump is grateful for Russia's help and wants more of it. He understands that the price of such help is not interfering with Putin's anti-democratic machinations. So he's intimidated intelligence officials into rarely or never broaching the subject, and has actively used the powers of his office to aid Putin, such as trying to get Russia back into the G7. It doesn't need to be a conspiracy. But one might call it collusion.

There have already been American deaths linked to these Russian bounties. Trump refuses to own up to the fact that it was wrong to ignore the intelligence in the first place, and even continues to deny that any of it's true. By calling the story a "hoax," Trump is signaling to Putin that he's got the Russian leader's back, and that whatever Putin wishes to do in the global arena, Trump will not only look the other way but will make excuses for him.

There's a lot of chatter about Trump having been blackmailed or paid off by Russians, and heaven knows our situation is so bonkers that you can't rule that out entirely. But we also don't need that sort of explanation, when the most obvious one is staring us in the face: Trump wants Russia to help him cheat in 2020, just like they helped him cheat in 2016, and he's willing to do whatever he can to make sure that happens. If the price requires the blood of American soldiers, then so be it.