It's going to be a long four months: Trump and Fox News just keep ramping up the racism

Desperate to distract from the coronavirus catastrophe, Trump and his media allies are going full-on rabid racism 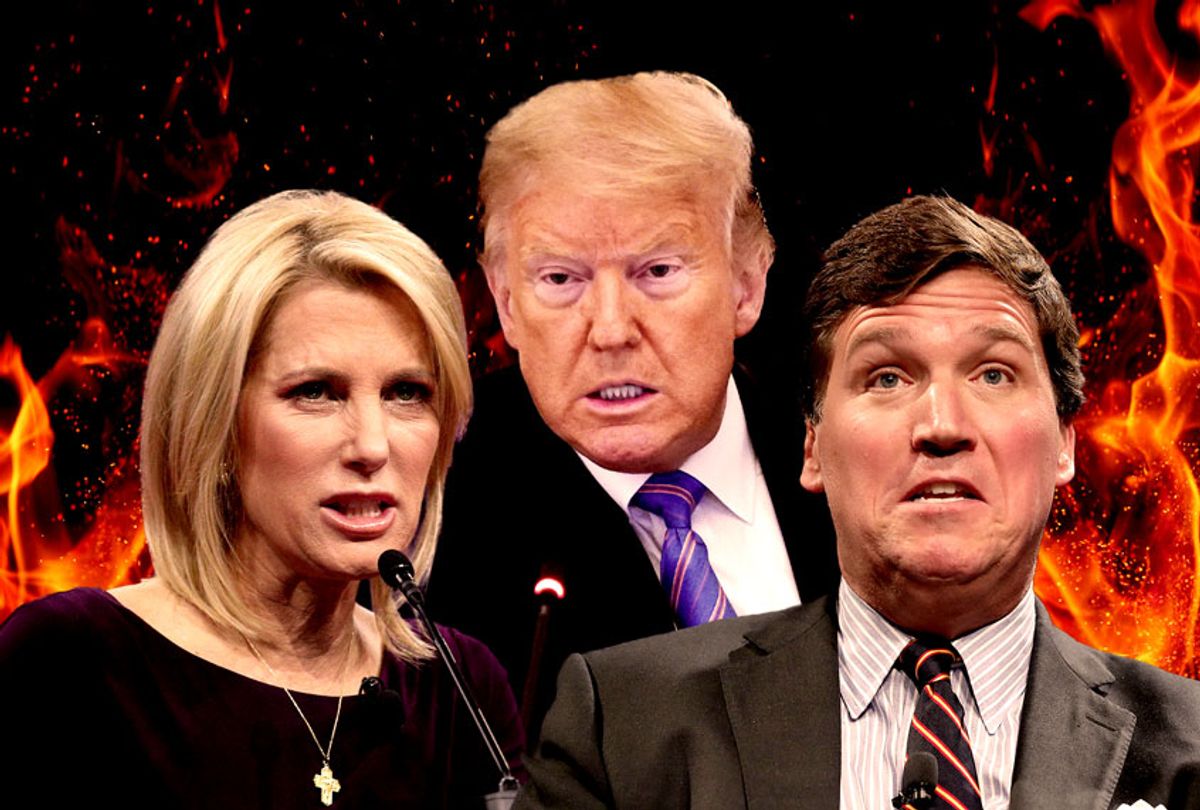 Racism is all he's got.

Everything else Donald Trump was going to run on this summer and fall has evaporated. The "booming" economy? (Which he inherited from Barack Obama in the first place.) The U.S. has the worst unemployment rate since the Great Depression and the situation is about to get exponentially worse as unemployment benefits expire. And no, "reopening" is not a solution, since the data makes clear that consumers have little interest in shopping or eating out during a pandemic.

And then there was Trump's plan to hold big rallies to make himself look like he's got momentum, while Joe Biden campaigns in responsible ways that don't spread the coronavirus Not only was that plan sociopathic, it's also not working. Trump's big comeback rally in Tulsa was a hilarious failure, with only a third of the arena filled. Now Trump has canceled a rally in Alabama, citing coronavirus fears. It's just as likely that the campaign was scared of more empty seats — even some of his most ardent followers would rather root for him at home rather than risk getting sick.

Trump's efforts to paint Biden as too old and out of it to do a job as difficult as being president? Well, in the face of reports that Trump did nothing to push back against Russia paying Afghan fighters to kill American soldiers, the only "defense" of Trump is that he's either too lazy or too illiterate to pay attention to his intelligence briefings. For a 74-year-old man trying to argue he's sharper than his slightly older opponent, having his press secretary argue that Trump does too know how to read is arguably not a great look.

As for the coronavirus itself, Trump is so hostile to any efforts to meaningfully fight the disease that people have started to wonder, only half-facetiously, whether he's campaigning on a pro-coronavirus agenda.

So now Trump, aided as usual by the massive propaganda apparatus at Fox News, is pushing all his chips on the bet that just enough voters in swing states will disregard all these failures, so long as he keeps escalating the racism. There's no real evidence this will work — his efforts to whip up racist hysterics about a "caravan" that was "invading" the U.S. in the fall of 2018 (it was really a small group of Central American refugees fleeing from violence) did nothing to prevent the Democrats' big midterm win — but Trump is a dull-witted man with few real ideas. Racism is all he has.

And if racism isn't working yet, Trump clearly thinks that piling on more and more of it will finally turn the tide.

On Tuesday night alone, Trump — who clearly isn't sleeping much, based on his Twitter patterns — went buck-wild with the overt racism.

Around 9 p.m., Trump tweeted that at "the request of many great Americans who live in the Suburbs" he is "studying" (ha) "the AFFH housing regulation that is having a devastating impact on these once thriving Suburban areas."

The reference may be a little obscure, but the intent definitely isn't. Trump is referring to an Obama-era rule to enforce the 1968 Fair Housing Act, aimed at ending racial discrimination in housing. Or, to put it more bluntly, Trump is suggesting that it ruins suburban life if Black people move in, and he's eager to do whatever he can to stop it. (Trump himself was sued by the Department of Justice for refusing to rent to Black tenants in the 1970s.)

Trump's administration has already put a pause on enforcing some Obama-era rules to desegregate housing, even though evidence shows that there continue to be dramatic levels of discrimination against Black people seeking homes to rent or buy. The administration has made some noises to make these moves somehow sound not-racist, but Trump's unsubtle tweeting suggests he sees the racism as a selling point. His theory, one supposes, is that white voters will thrill to hear he's working to keep Black people from moving into their neighborhoods.

Later that night, Trump threatened to defund the entire U.S. military if the Senate tries to rename military bases that currently sport the names of Confederate military leaders. Again, not exactly subtle. These bases should never have been named for traitors who took up arms against the U.S. government and killed hundreds of thousands of patriotic American soldiers in the name of white supremacy. With this threat, Trump is pretty clearly saying that racism matters more than patriotism, which is turning out to be a pattern with him.

There are reports that some members of Trump's staff think that going full-on white supremacist is a bad look — anonymous White House staffers recently told reporters that they spent three hours trying to get Trump to take down a tweet featuring that infamous video clip of golf-cart-riding supporters shouting "white power" — but the biggest hosts at Fox News think this ramped-up racism is a winning strategy for their orange reality-TV president.

Basically, the message coming from Fox News in recent days has been to threaten the network's older white viewers with the prospect that a failure to vote Republican might mean, heaven forbid, that the forces of anti-racism will triumph. Apparently, Fox News hosts believe nothing could be more terrifying to their viewers than the possibility that they might have to live near Black people, or treat them with respect.

"If Biden wins," Laura Ingraham announced on Fox News Tuesday night, "you'll be sending money to Washington so Pelosi and the squad can commission statues of their new heroes of the left. Like, I don't know, Colin Kaepernick and Stacey Abrams."

The context of this snark, of course, is the ongoing Trump-fueled controversy over Black Lives Matter activists demanding the removal of statues celebrating historical figures, mostly Confederate military leaders, who are viewed as white supremacists, as well as the fight over renaming military bases, maybe to honor people who didn't commit treason. In Ingraham's world, statues honoring Black people who have fought against racism, often at great personal cost, would be preposterous, but statues honoring white supremacists are "what makes this country so great."

Similarly, Fox News host Tucker Carlson dug into an apocalyptic racist fantasy Tuesday night, proclaiming that "Americans who want to live as they did just 15 years ago, quietly, productively, without being harassed and harangued by self-righteous lunatics" are going to "need a protector," and that "protector must be the Republican Party."

There are, of course, no reports of "self-righteous lunatics" going into the homes of quiet, productive people to harangue them. That's just a fantasy Carlson is spinning to justify conservatives' pangs of guilt when they turn on the news and see people who are angry about racism or sexism or other social ills that sofa-bound right-wingers would rather not interrogate. The option to turn the TV off and live in ignorance is always there, but Carlson wants his audience to feel aggrieved and play the victims.

The scary thing here is that of course there's a well-known Fox News-to-Trump feedback loop. The president gets himself all worked up by imbibing Fox News' racial grievance politics, and then turns around and pours his racist vitriol out on Twitter and into speeches. Then the Fox News crew takes their cues from Trump and turns up the racism even more.

Given the Trump campaign's desperate need to distract from the economic collapse, the pandemic and the fact that Trump's Russian buddies reportedly paid bounties for the lives of American soldiers, this feedback loop is only going to get worse. Their bag of tricks is running out, and racism is all Trump and his media allies have left. It's four months and two days until the election and in that time, we can expect the white supremacist demagoguery to escalate day by day. Considering what a powder keg this country already is, it's a downright terrifying situation.