Russia bounty shocker: Trump never cared about the troops — only racism and re-election

Trump harangued NFL players for kneeling, but did nothing about Russia paying bounties to kill American soldiers 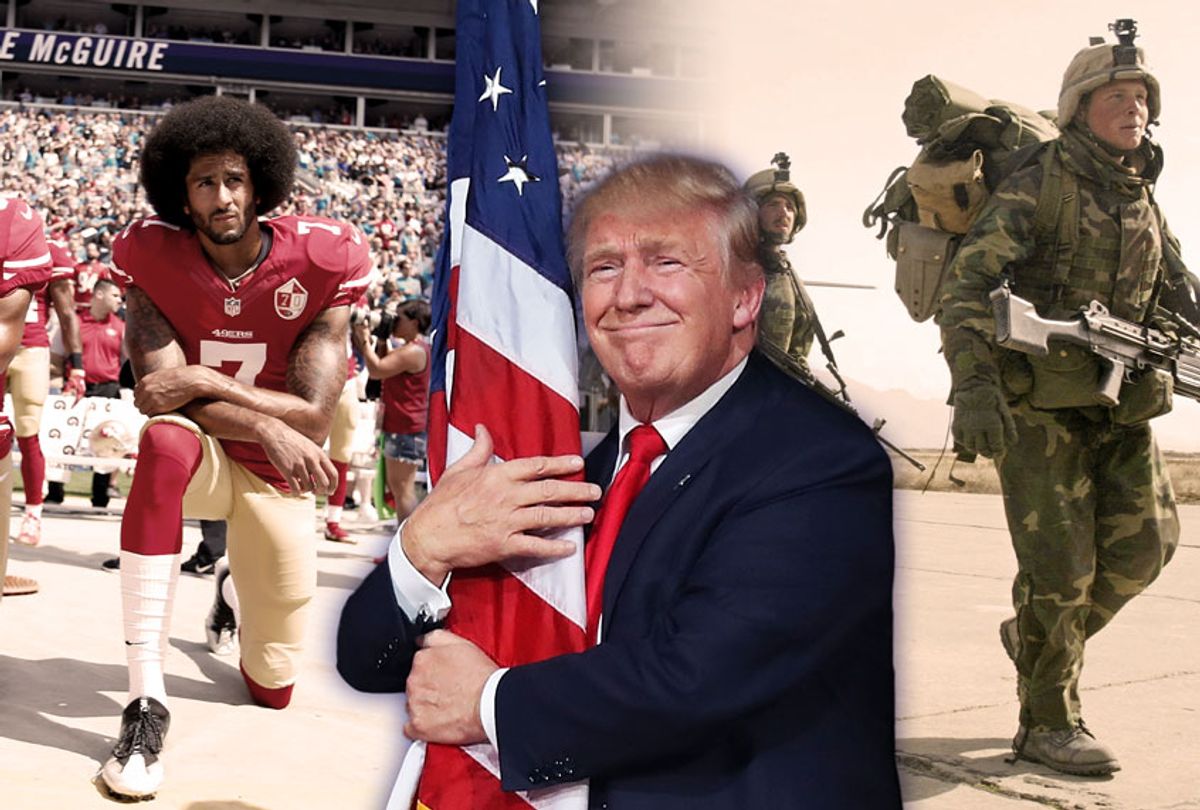 It's safe to say that few things have obsessed Donald Trump more than his outrage at professional athletes who have chosen to kneel during the national anthem to protest racism and police brutality. Particularly in the fall of 2017 — while he was still smarting from the national outrage at his description of the white supremacists who rioted in Charlottesville as "very fine people" — Trump went on a rampage against the NFL kneelers, trying to position his racist response as patriotism and love for U.S. troops.

"Wouldn't you love to see one of these NFL owners, when someone disrespects our flag, to say, 'Get that son of a bitch off the field right now. Out. He's fired. He's fired,'" Trump ranted at an Alabama rally in September 2017.

Trump also declared that month on Twitter that NFL ratings were down because "many stay away because they love our country."

He was so committed to this idea that kneeling during the anthem was an insult to the troops and the nation that he sent Vice President Mike Pence to an Indianapolis Colts game for the specific purpose of staging a walkout the moment players took a knee during pregame ceremonies.

Trump has been back at it again lately, tweeting angrily and ranting during his disastrous Tulsa rally that the NFL will regret it if players continue their kneeling protest in the season that may or may not occur this fall.

It was always preposterous that Trump's antipathy to the kneeling athletes was about patriotism and "supporting the troops," rather than flat-out racism. Colin Kaepernick, the former San Francisco 49ers quarterback who started the kneeling tradition (and who lost his job in the NFL for it), came up with the idea of taking a knee after consulting with a friend who was a Green Beret on the best way to speak out against racism without insulting the troops or the flag.

Moreover, in the past few weeks Trump has been on a tear about the supposed importance of maintaining monuments and military bases honoring Confederate generals and leaders. When you consider that hundreds of thousands of U.S. troops died fighting the white-supremacist traitors who started the Civil War, Trump's attachment to Confederate iconography should have been definitive proof he doesn't care about "the troops."

But in case there was any lingering doubt that Trump's claim to love U.S. troops is all an act, consider the damning reports from the New York Times and other news organizations this week that Trump ignored his own intelligence agencies when they told him Russian agents were likely paying bounties to Taliban fighters to kill American soldiers in Afghanistan. Trump not only didn't pay any attention to these reports, he continued to push for Russia to rejoin the G7, likely because of his continued admiration for Russian President Vladimir Putin, whom Trump adored even before Putin ordered his own intelligence to meddle the 2016 election on Trump's behalf.

Trump denied those initial reports, claiming he hadn't been briefed at all, even though intelligence officials were so concerned that the National Security Council reportedly held an interagency meeting in late March to come up with options to push back against Russia — none of which Trump adopted. In response to Trump's denials, anonymous intelligence officials have since told the Times that Trump received a written briefing on the matter, with one citing a date of Feb. 27.

Furthermore, the AP has reported that White House officials "were aware in early 2019" — a full year earlier — that classified intelligence indicated "Russia was secretly offering bounties to the Taliban for the deaths of Americans," and that then-national security adviser John Bolton personally briefed Trump on the matter in March 2019. (Bolton has declined to comment.)

Since these revelations have hit the headlines, a rowdy debate has erupted in the political-junkie world over whether Trump actively chose to ignore intelligence that Russia was paying Taliban fighters to kill American troops, or he simply didn't understand the intelligence because he doesn't read written briefings and doesn't pay attention to oral briefings.

There are indications that intelligence officials are afraid to tell Trump anything that might threaten his love affair with Russia and specifically with Putin. But in a sense, this is all just hair-splitting. Either Trump is so in love with Putin that he refuses to act on any negative information about him, or he's so in love with Putin that intelligence officials have concluded that sharing negative information about Russia is wasted effort. Either way, Trump cares so little for the lives of American troops that he has done nothing to protect the lives of soldiers from Russian machinations.

Trump's disregard for the life and safety of American soldiers has been made even more clear in his response to the breaking story about the Russian bounties for American lives. As Heather Digby Parton pointed out in Salon on Monday, Trump reacted to the story by playing golf all day, complaining about "fake news" on Twitter, and obsessing about how this makes him look bad — all without showing even a milligram of concern about the U.S. soldiers who may have died thanks to Russian bounties.

Trump's flag-hugging and anthem-adoring routine was never about "the troops," obviously. It was all a pretext for his real agenda, which was to gin up racist resentment against people engaged in peaceful, silent protest against racism and police violence. This reflects both Trump's obsessive racism and his evident belief that conservative voters will excuse any amount of incompetence and malice so long as he keeps stoking their bigotry.

After all, it isn't just that Trump doesn't care about American soldiers dying. Trump has also shrugged off the deaths of more than 126,000 Americans from the novel coronavirus, and is continuing to push the message that the virus is behind us, even though new cases are spiking in many places around the country and several states that "reopened" too hastily are being forced back into partial shutdown.

In an effort to distract Americans from his failures on public health care and the economy, Trump is escalating the racist trolling. That's why he's returned to the well of griping about kneeling athletes — and why he tear-gassed peaceful protesters in front of the White House. Just in the past few days, Trump retweeted a video of wealthy St. Louis lawyers threatening Black Lives Matters protesters with guns and another one featuring Trump fans in golf carts shouting "white power" (which he later pretended he didn't mean to do), and then gave an interview to Fox News in which he suggested that Black Americans were ignorant of history.

Trump is no patriot and he never has been. "Patriotism" is a mere fig leaf for his real agenda, white supremacy. This should have been obvious all along, but is now undeniable in light of his unwillingness to push back against Russia even after it bribed enemy forces to kill American troops. Trump's believes that American voters — or at least enough of them to swing the Electoral College — are driven more by racist fears than by concern for the lives of American soldiers. We'll have to wait until November to find out if he's right.