Trump to Black Americans: "If you don't understand your history, you will go back to it again"

"We have to remember the heritage and the culture of our country," the president says of Confederate monuments 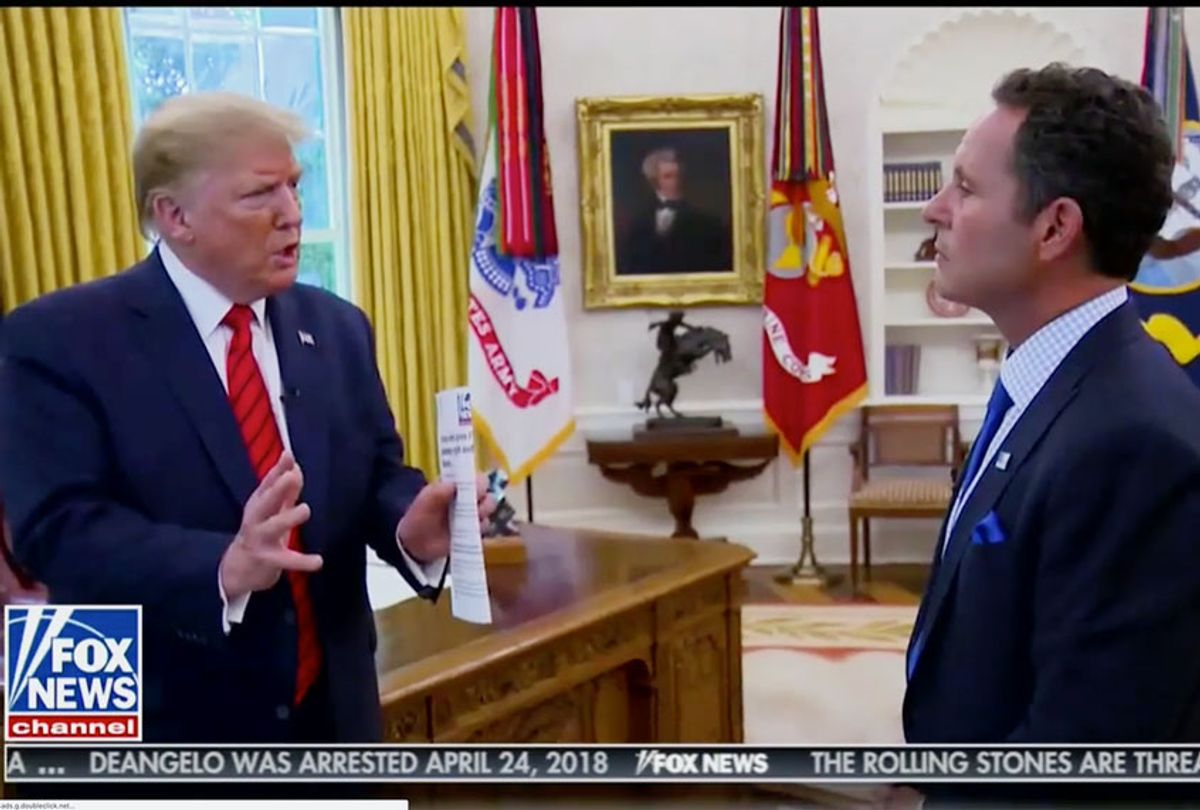 President Donald Trump told "Fox & Friends" co-host Brian Kilmeade in a Sunday evening special that his message to Black Americans demanding the removal of monuments honoring slave owners is this: "You have to learn" about "your history."

"If you don't understand your history," Trump added, "you will go back to it again."

The president made the remarks during a discussion about growing calls to take down statues commemorating Confederate heroes and other prominent Americans who owned slaves.

Kilmeade pointed to "brilliant" leaders, such as former presidents Thomas Jefferson and James Madison, who were problematic because they owned slaves.

"So how do we grow as a country and yet not forget our past?" he asked.

The president said it would be foolish to remove statues of George Washington, because "half of our country is named after Washington."

"We have to remember the heritage and the culture of our country," he continued.

Trump added that "a lot of these people don't even know what they are taking down."

The president threatened last week to sign an executive order punishing "anarchists" who destroy statues with jail time, which called for 10-year sentences for anyone convicted of the crime.

Kilmeade then asked Trump what his message was for Black Americans, specifically, whose ancestors were enslaved.

"Since you have done a lot for the African-American community, what is your message to them when their ancestors were enslaved because of [past leaders honored on monuments today]?" the Fox News host asked the president.

Trump replied that Black Americans need to learn about the country's history, lest they "go back to it." His comments suggested that slavery could reoccur if monuments to slave-owners were removed.

My message is that we have a great country: We have the greatest country on Earth. We have a heritage. We have a history and we should learn from the history. And if you don't understand your history, you will go back to it again. You will go right back to it. You have to learn.

Think of it: You take away that whole era, and you're going to go back to it sometime. People won't know about it. They're going to forget about it. It's OK.

Now, what I do like? I like the idea of building new statues to people — to great people. People that have done something. And I think that's OK.

The president went on to moon over the aesthetic beauty of some of the disputed statues, a great many of which feature a prominent uniformed Confederate war figure bearing a sword astride a horse.

But you don't want to take away our heritage, and history and the beauty. In many cases, the beauty — the artistic beauty. Some of the sculptures and some of this work is some of the great — you can go to France. You can go anywhere in the world, and you will never see more magnificent work. And that's a factor. It's not the biggest factor, but it's a factor.

During an appearance last week on Fox News, Sean Hannity asked Trump what his priorities would be if he were re-elected to a second term. The president did not name one.

Instead, he spoke briefly about the handful of visits he made to Washington earlier in his life before pivoting to blast his former national security adviser John Bolton, whose new White House memoir documents the president's pathological proclivity to commit impeachable offenses, as "an idiot."

You can watch the president's interview with Kilmeade right here.