Coronavirus is back, and spreading — but let's blame Trump, instead of each other

An indefinite lockdown was always unsustainable, but Trump's lack of a plan led to our current predicament 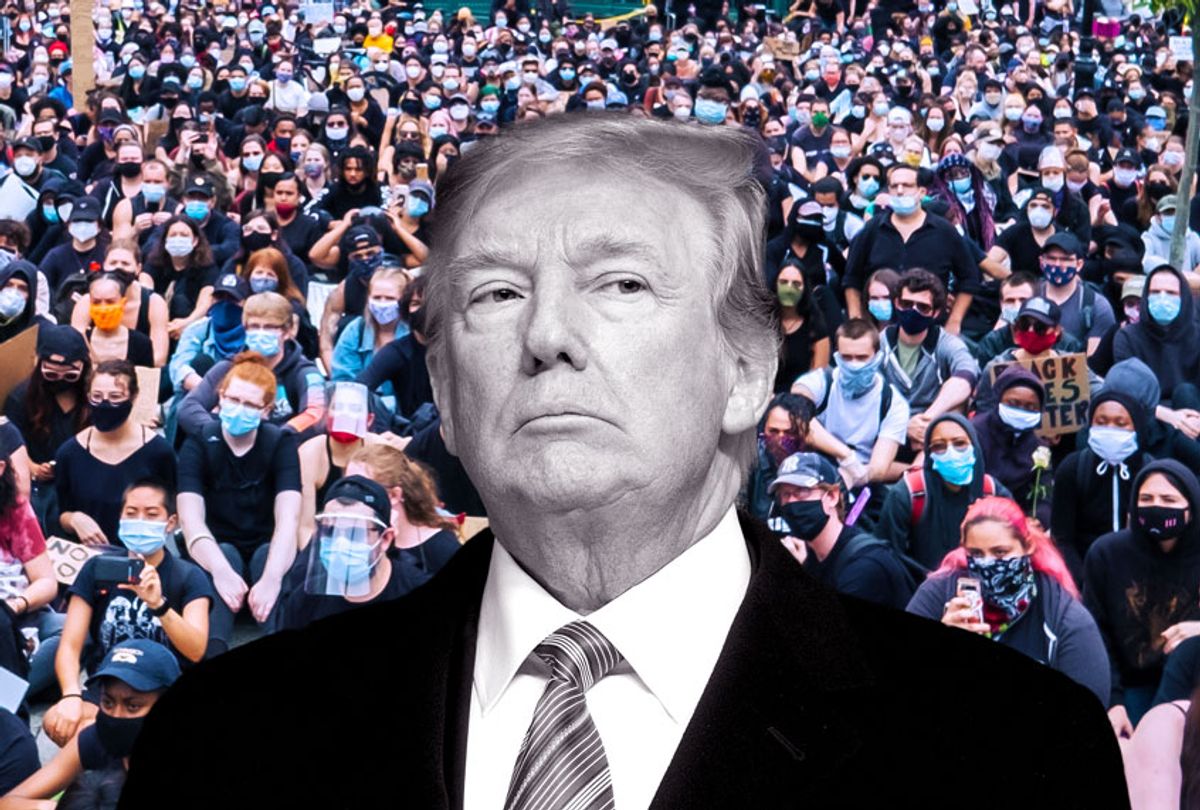 Donald Trump wants to pretend the coronavirus is in the rearview mirror, but reports over the weekend suggested that instead the U.S. is witnessing a resurgence of the virus after weeks of decline. Twenty-one states have seen an increase of new cases in recent days. Most of the spikes are in Republican-controlled states like Texas, Florida, Georgia and Arizona, where governors curried favor with Trump by lifting restrictions long before meeting even some of the criteria recommended by public health officials. On Sunday, the death toll from the virus, now at 118,000, surpassed the number of American lives lost in World War I.

In response to this surge, Americans living in our polarized political culture are pointing the finger at each other. Conservatives are opportunistically blaming the anti-racism protests spreading across both big urban areas and small towns. Liberals, on the other hand, are casting a gimlet eye on Americans who have crowded into outdoor spaces at bars and restaurants in states that have allowed those establishments to reopen.

Such liberals didn't limit their judgment to folks who are doing their public drinking and socializing in red states that reopened too soon and have seen their coronavirus cases soaring. A lot of the scolding was aimed at people in states like New York and Pennsylvania, which have been cautiously reopening after steep declines in transmission rates. This one video of young people on St. Mark's Place in Manhattan's East Village on Friday night drew a great deal of ire over the weekend.

Whether coming from the left or the right, coronavirus complaints have generally taken the form of grievance and jealousy: How dare these people protest/party when I haven't been able to [fill in activity presented as more wholesome] in months?

But whether those engaging in corona-shaming are on my political "team" or not, my heart sinks to see it. People need to stop blaming each other. Instead, we should focus our ire on Trump and the Republicans, who have put us in this untenable choice between indefinite lockdown and the coronavirus spreading unchecked.

The lockdown was never supposed to be indefinite.

The lockdown was supposed to be a temporary emergency measure, put in place so that the federal government could draft a long-term plan to ramp up testing and tracing, as well as medical response, so the country could be reopened in a safer manner and our health care systems wouldn't be overwhelmed.

Trump got in the way of formulating such a plan, much less implementing one, because he committed early on to the idea that the best approach was to let people get infected by the millions and simply deny that it was happening (which is why he is so opposed to testing).

On Monday, Trump reiterated this notion that it's better to lie about it than deal with it:

.⁦@realDonaldTrump⁩, in a meeting at the White House, repeats his contention that if the US stopped testing for #coronavirus, there would be few if any cases left. pic.twitter.com/zJ0ZVJVErd

The debate should have been between reopening with a plan versus re-opening without a plan. Trump, instead, successfully reframed the debate as one between indefinite lockdown and reopening, with him guiding Republicans to the "reopen and damn the consequences" side.

In the face of this problem, where there's no federal plan to reopen safely, it is understandable that so many people have decided that the alternative is to expect the entire population to voluntarily submit to many more months of lockdown, possibly a year or more, with no end date in sight.

Indefinite lockdown, however, is simply not workable. I worked as a sexual health reporter for years, and in that time, one thing I fully came to understand about public health care was this: Preventative health care only works if it is compatible with human nature.

Or, more bluntly, if you tell people that to protect their physical bodies, they must not live their lives, they won't listen to you. People need pleasure and they need social connection. Any public health care intervention that doesn't allow for either is bound to fail.

This truth is most obvious when it comes to the sexual health debate. Conservatives have repeatedly insisted since the dawning of the AIDS crisis that the best — indeed, the only acceptable — intervention is sexual abstinence. This meant lifelong celibacy for queer people and, for straight young people, waiting for what might be a decade or more between adolescence and marriage.

Setting aside the moral debate about whether non-marital sex is wrong (it's not), the problem with the conservative prescription is that it flat-out doesn't work, and never could. It's human nature to have sex. People will do it no matter how much you shame them about it. Interventions that accept or even celebrate the fact that people will have sex — condom distribution, sex education, shame-free sexual health care — have been far more successful than abstinence prescriptions in reducing the rate of transmission of HIV and other sexually transmitted infections.

Nor is it the case that the difference between HIV and coronavirus prevention was one of personal risk versus one's obligations to a larger community. It's always been about both. Wearing a condom, for instance, is just as much about protecting the person you're having sex with and keeping a virus from spreading to the larger community, if not more so, than about mitigating your personal risk.

The same principles apply to all preventative care. If you want people to eat better, healthy food needs to be not just available and affordable, but tasty — or people will reach for the donuts instead. Telling people to abstain from drinking alcohol altogether backfires, but most can be convinced to drink in moderation. Getting people to exercise is really hard, but it can be done if they find a form of exercise they like. People won't stay out of the sun, but they will wear sunscreen.

If people won't quit having sex because you scold them, they sure aren't going to give up all human contact for months without any promise of relief. No, the threat of death won't make a difference. In the '80s and '90s, getting HIV was widely viewed as equivalent to a death sentence, and people had sex anyway. So we can guess folks will roll the dice with COVID-19, which can be a serious infection with long-term consequences but is far less deadly than AIDS was back then. We don't even need to guess. We can just look outside our doors.

I kept seeing that video of the St. Mark's crowd in my Twitter feed over the weekend and, frankly, I felt that same impulse to shame and judge. But I'm in my 40s and live in a small but comfortable home with a backyard, cats, a partner whose company I enjoy and a well-stocked liquor cabinet. It's curmudgeonly of me to begrudge pleasure to a 20-something single person living in a cramped New York apartment who hasn't seen a friend or gotten laid in months. People do not live on bread alone, and progressives should certainly understand that.

Instead of attacking people for going out and having fun, I'm angry with Trump and the Republicans for even putting us in this situation.

The lockdown was never supposed to be the solution. It was an emergency measure, meant to buy time to come up with a real solution. It was reasonable to ask people to stay at home for a few months — which is why the conservative protesters who demanded that we reopen without a plan were wrong — but now that there's no plan and no possibility of a plan, it's unfair and unrealistic to expect people to give up their lives indefinitely with no hope of relief.

Literally, that's what government is for: Drafting policies to manage big problems, instead of just leaving it up to the masses of people making individual choices. But we don't have a functioning federal government right now, so here we are.

In the meantime, the better approach to our current public health care crisis is not to follow the failed abstinence-only approach for which progressives have rightly derided conservatives when it came to sexually transmitted infections.

I get why it feels easier to yell at people for giving up on the lockdown, rather than to keep yelling at Trump. Trump doesn't care. He's made it clear he doesn't care. Ordinary people do care, however, and seem easier to persuade.

The problem with that, however, is that those folks did their part. They sacrificed for months, often losing their jobs and suffering serious mental health consequences. They were failed by a federal government that didn't step up and do its job. If they have decided to throw caution to the wind and live their lives, well, that's only human.

It's time for progressives to embrace an approach that incorporates the understanding that human beings need to live their lives, not just sustain their bodies: Harm reduction, meaning an approach that educates people on measures they can do to reduce risks rather than absolutist prescriptions. That works to reduce HIV transmission and it will have to work here and now with coronavirus, because people's tolerance for lockdown is not infinite.

I'm not the first person to say this, to be clear. An increasing number of public health experts are working on guidelines that will allow individuals to gauge the risk to themselves and others, and balance that against their very human needs to feel pleasure and experience companionship. These kinds of guidelines, such as wearing a mask and socializing outside, won't eliminate the spread of the virus, and probably won't get it below the levels we were hoping for. Without a central federal plan, however, that's the best we can do.

Expecting millions of Americans to give up their lives indefinitely was never supposed to be the plan. As we see now, it's not a workable solution. The fact that we don't have a better replacement is Trump's fault. So focus your ire on him and his enablers, not on ordinary Americans who have given up on a lockdown that was never supposed to last forever.