It's nothing new, and it shouldn't be shocking: Winking at white supremacy is how he won in the first place 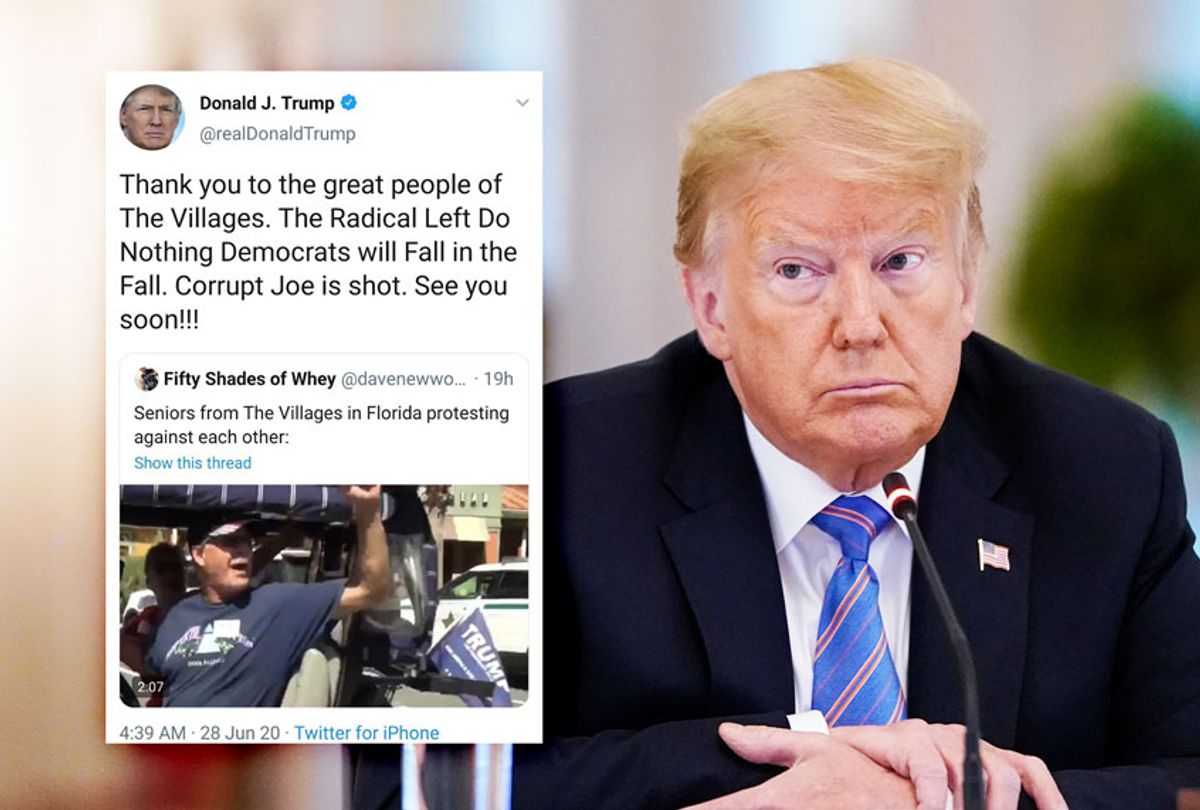 To this point in his presidency, Donald Trump has told more than 19,000 public lies.

However, he recently did something very much out of character: He was honest about his inner thoughts and true beliefs.

On Sunday, the president retweeted a video of one of his supporters in Florida displaying "Trump 2020" and "America First" signs while repeatedly shouting, "White power!"

Here's a summary from NBC News of what happened:

The video, which Trump said was from the Florida retirement community known as The Villages, featured a parade of golf carts, some with pro-Trump signs, driving past anti-Trump protesters who were shouting curses at them. The man who is heard shouting "white power" was responding to protesters shouting "racist."

The tweet was removed from his feed hours later.

"Thank you to the great people of The Villages," Trump had written. "The Radical Left Do Nothing Democrats will Fall in the Fall. Corrupt Joe is shot. See you soon!!!"

Trump's handlers could not allow such a moment of honesty to stand on its own. Instead, they have tried to erase it. (As noted, the tweet was deleted later in the day.)

Deputy White House press secretary Judd Deere attempted to clean up the president's mess by saying, "President Trump is a big fan of the Villages. He did not hear the one statement made on the video. What he did see was tremendous enthusiasm from his many supporters."

On CNN's Sunday talk show "State of the Union," Health and Human Services Secretary Alex Azar tried to make excuses for Trump's tweet by saying that "obviously neither the president, his administration nor I would do anything to be supportive of white supremacy or anything."

The facts: Sunday was hardly the first time that Donald Trump has shared white supremacist, anti-Semitic or other kinds of hateful messages on Twitter.

Through his behavior, words and public policies he advances, Trump has repeatedly shown himself to be a white supremacist.

The phrase "white power" is a racist slur and a threat of violence against nonwhite people. Innumerable Black and brown people, and many others as well, have been killed under its banner.

Trump recently visited Tulsa, Oklahoma, the site of one of the United States' worst instances of white-on-black terrorism, for his first "comeback rally," which was originally scheduled for "Juneteenth."

Trump is trying to choke out America's multiracial democracy. He went to Tulsa to dance on its grave.

Trump has repeatedly pledged his allegiance to the treasonous Confederate States of America, vowing to defend public monuments to its evil cause.

Trump has threatened those Americans who are protesting police thuggery and murder in the aftermath of George Floyd's murder with a possible military crackdown. He has described Black, brown and white protesters as "thugs."

White House adviser Stephen Miller, perhaps Trump's most trusted and valued aide, is an overt and unapologetic white supremacist.

Trump believes that Hispanics and Latinos are a natural-born race of rapists and murderers who only want to come to America to brutalize white people. Trump has repeatedly sought to enact policies that bar Muslims from entering the United States. He has tried a series of maneuvers to minimize or eliminate immigration to the U.S. from nonwhite countries.

Trump and his regime have imprisoned tens of thousands of nonwhite migrants and refugees. Cruelty against nonwhite people continues to be the Trump regime's unifying political strategy.

Donald Trump obsessively threatens Barack Obama, the country's first black president, with charges of treason and then imprisonment or worse. (Traditionally, treason was punishable by death.) Trump was also a key voice in the racist "birther" conspiracy which claims that Obama was not a "native-born" U.S. citizen and therefore ineligible to be president.

Trump has been endorsed and embraced by the Ku Klux Klan and other white supremacist groups.

As revealed by a series of lawsuits in the 1970s, Donald Trump and his father would not rent apartments to Blacks and Latinos.

Trump and the Republican Party have enacted public policies aimed at restricting the civil rights and human rights of Black and brown people.

Trump infamously described the white supremacists and racist hoodlums who rampaged through Charlottesville, Virginia, in August of 2017, killing Heather Heyer and injuring many others, as "very fine people." Not surprisingly, when the president Trump the "white power" video on Twitter he also described his supporters seen in the clip as "great people."

Ultimately, "white power!" is Donald Trump's value system and brand name. The same is true of today's Republican Party. But even in his moment of "white power" honesty, Trump cannot escape the lies.

Whiteness itself is a lie. There are no "white" people. As historians, social scientists and others have exhaustively documented, whiteness is a socially constructed identity that first came into existence in the 15th and 16th centuries, but was not fully solidified until the 18th and 19th centuries. Throughout its history, the definitions and boundaries of who counted as "white" have constantly shifted. Historian Nell Irvin Painter, author of "The History of White People," explores this in a new essay for NBC News:

White identity didn't just spring to life full-blown and unchanging, which is what most people assume. Whiteness is severely under theorized, leaving millions unaware of a history whose constant characteristic is change. Whiteness has changed over time, over place, and in the myriad situations of human ranking.

Let me say it again: Whiteness has a history whose meanings change. Neither scholars nor ordinary people have been able to agree upon the definition of white people — who is white and who is not — nor on the number of races that count as white. Disagreement reigns and has reigned since the modern scientific notion of human races was invented in the 18th-century Enlightenment. Nota bene: invented in the 18th century.

Before the Enlightenment, people classified themselves and others according to clan, tribe, kingdom, locale, religion and an infinity of identities dependent on what people thought was important about themselves and others. Before the Enlightenment, Europeans could see human difference, they could see who was tall, who short, who light-skinned, who dark, differences they explained according to religion, cultural habits, geography, wealth and climate, among the most usual characteristics, but not race.

In the most fundamental ways, white-on-black chattel slavery, European colonialism and imperialism helped to establish whiteness as a meaningful social identity in the West and other parts of the world.

White people are not victimized or otherwise discriminated against in America as a group because of their racial identity. In reality, white people as a group control every major social, political, economic and cultural institution in this country.

Trump's most recent endorsement of white supremacy through his sharing of a "white power" message on Twitter is not, contrary to what some have suggested, a preview of his 2020 re-election strategy. He campaigned on racism and white supremacy in 2016, and that lifted him to the presidency. Trump is simply continuing with the only strategy he understands, and the one he knows will appeal to his supporters. In all, white supremacy is the connective tissue of the Age of Trump.

The commentariat often describes Donald Trump's racism and white supremacy as an example of "dog whistle politics" or, alternatively, "air raid sirens" and "foghorns" directed at his base. That is true enough. But there is also a better description.

Trump may be best understood as a white supremacist flasher who leaps out of the bushes and opens his trench coat, exposing his ugliness to hapless passersby. Then he flees and denies it ever happened, relishing the thrill of what he just inflicted on the public.

But in a most unfortunate situation for America and the world, the deviant is not hiding behind a dumpster in a fetid alley. Instead he is in the Oval Office and has an audience of tens of millions who are titillated by his vile performances.