Tulsa made clear that Trump's movement is enfeebled. But don't be fooled into thinking it's not still dangerous 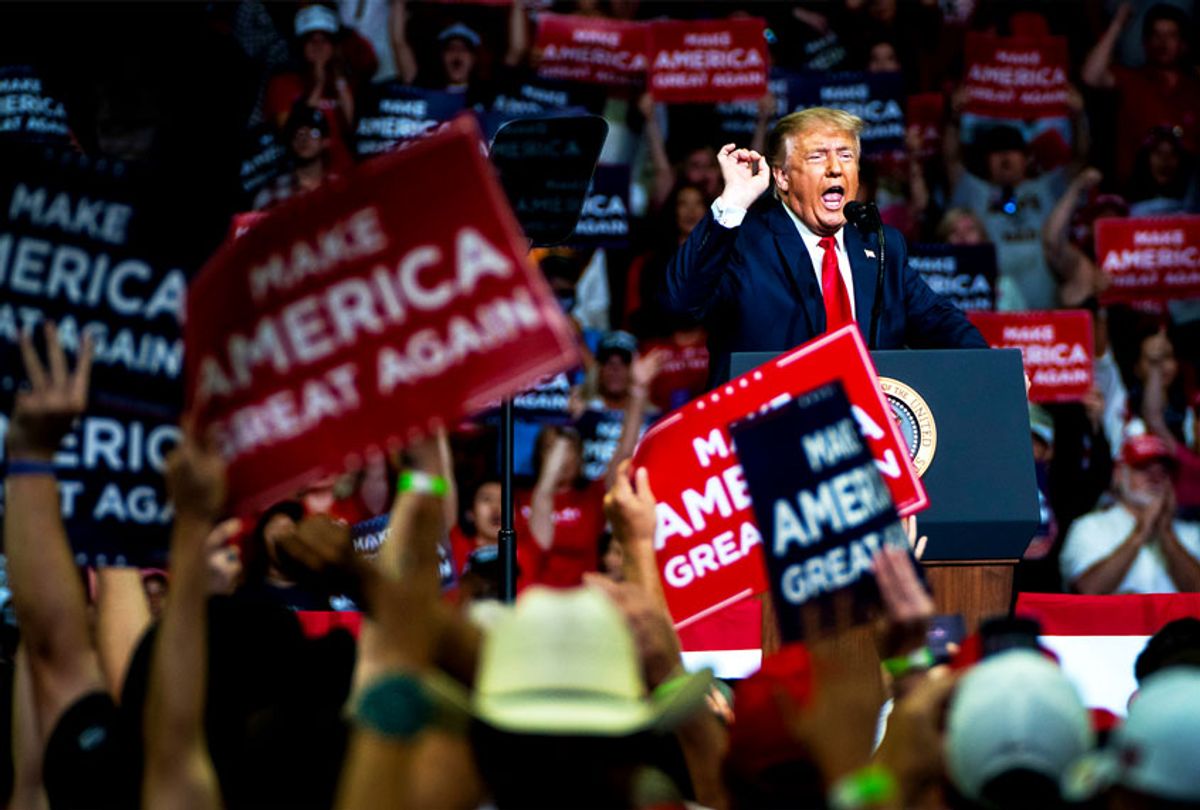 Among other things, Donald Trump is a neo-fascist, a de facto crime family boss, a serial liar, a traitor, mentally disturbed, a misogynist, endlessly corrupt and a white supremacist.

Donald Trump is also a political vulture, a carrion eater who vomits out poison for his followers to ingest.

Although Donald Trump's rally on Saturday in Tulsa, Oklahoma, was pitiful and poorly attended, Trump offered his followers a buffet of their favorite treats.

President Trump's first rally since the pandemic began takes place in Tulsa this Saturday, and while the content is predictable — an interminable stream-of-consciousness rant about the insufficiently worshipful news media, fake polls, aides who have betrayed him, and anyone else who happens to have aroused his ire that day — this rally will be something special….

Trump is holding his first mid-pandemic rally in a place and at a time guaranteed to make people angry and upset. He's coming to a state fast becoming a coronavirus hotspot, putting on a rally almost certain to spread covid-19. In advance of the event, he's ratcheting up tensions and threatening violence against peaceful protesters.

All that's left is for Trump to rant and rave in ways that are alternately appalling and nonsensical, putting on another vulgar performance that reminds us all why his presence in the most powerful office on earth is so odious….

Waldman was uncanny in his accuracy.

The Trump campaign tried to explain the poor attendance at the Tulsa rally by saying that there were "protesters" and "threats," that "entrances were blocked", and the "fake news" somehow conspired to prevent Trump's followers from attending. Of course, none of this is true.

More than 120,000 Americans have been killed by the coronavirus pandemic. During the rally, Donald Trump effectively admitted to acts of malevolent, willful and perhaps criminal negligence when told the crowd that he personally limited the number of coronavirus tests available to the public.

Why? Donald Trump believes that fewer tests will hide the real number of cases, which presumably helps his re-election chances.

Early in the Tulsa rally Eric Trump said that those Americans who are participating in the Black Lives Matter campaign to end police brutality and other forms of social injustice are "animals." Donald Trump would pick up his son's racist baton by describing the coronavirus as the "kung-flu," a racial slur against Asians and Asian Americans.

The unhinged left-wing mob is trying to vandalize our history, desecrate our monuments, our beautiful monuments, tear down our statues, and punish, cancel and persecute anyone who does not conform their demands for absolute and total control. We're not conforming…. This cruel campaign of censorship and exclusion violates everything we hold dear as Americans. They want to demolish our heritage so they can impose a new oppressive regime in its place.

Trump continued, now adding threats of violence, "And our people are not nearly as violent, but if they ever were, it would be a terrible, terrible day for the other side."

Trump's repeated use of the word "our" is one of many examples of how he and his followers understand their political community to be "whites only" — except for the relative handful of nonwhite people willing to be human props in service to white supremacy.

In the final analysis, a teachable moment is more useful than cataloguing every example of Donald Trump's vile behavior during his Tulsa rally.

To that end, how was this event an illustration of America's ugly unresolved past and its influence on the present?

Given the influence that White House senior adviser and white supremacist Stephen Miller holds over the Trump regime, it is no coincidence that Trump's first post-lockdown rally took place in Tulsa (the site of one of the country's worst white massacres of Black people) and was originally scheduled for Juneteenth (the day when Black human property in Texas found out they won their emancipation in 1865).

The raw truth: Donald Trump and his followers attended his Tulsa rally to dance on the graves of Black people.

It does not matter that after apparently bowing to public pressure, Trump moved his rally from Friday to Saturday.

The Age of Trump is like a horror movie, changing the day of the Tulsa rally is like removing the headstones in a cemetery, leaving the bodies in the ground, and then building a real estate development on top of them.

In the recent public discussions of the Tulsa massacre, there has often been a dangerous erasure of history.

For many Americans, the horrific events of Tulsa in 1921 and the dozens of White-on-Black racial pogroms in the bloody Red Summer of 1919 are little-known facts. Ignorance has worked through laziness and the white racial frame to hide one of the most ignoble periods in American history from public consciousness. It is a necessary step toward becoming a more mature society that the Tulsa massacre and other examples of American racial terrorism and ethnic cleansing are becoming more widely known.

In that discovery of victimhood and loss, however, we must not overlook the history of Black America's resistance to white supremacy, and its triumphs against it.

In Tulsa and other places, including Chicago, Washington, D.C., South Carolina, Indiana and many other communities, the Black community — often led by World War I veterans fought back against white mobs.

There is a rich tradition of resistance, self-defense and freedom fighting in Black America that reaches back to slave rebellions forward to the "Deacons of Defense" who protected civil rights workers during the 1950s and 1960s. This tradition continues in the post-civil rights era and the Age of Trump.

Despite the vast amount of violence that White America has marshaled against the Black Freedom Struggle, it was and remains a remarkably peaceful movement and cause. As activist, professor, and philosopher Cornel West explained to me in a recent conversation for Salon: "There was not a Black version of the Ku Klux Klan. We could have a Black version of the Ku Klux Klan. It could have been the dominant Black response to American empire. Instead, Black Americans and others across the Black Atlantic produced love warriors."

Black Americans and their allies want a true democracy on both sides of the color line for all people. Ultimately, the Black Freedom Struggle is a claim on equality, not superiority, in citizenship and belonging. Those justice claims have been advanced not through weakness and surrender but through resistance, dignity, bravery, heroism and struggle.

In that way, the glorious victory won by Black Americans on Juneteenth and then forward to the horrors of Tulsa 56 years later were stops in a centuries-long struggle to create a true American democracy on both sides of the color line.

In his address at the end of the Selma-Montgomery march in 1965, Dr. Martin Luther King Jr. said:

If it may be said of the slavery era that the white man took the world and gave the Negro Jesus, then it may be said of the Reconstruction era that the southern aristocracy took the world and gave the poor white man Jim Crow. He gave him Jim Crow. And when his wrinkled stomach cried out for the food that his empty pockets could not provide, he ate Jim Crow, a psychological bird that told him that no matter how bad off he was, at least he was a white man, better than the black man. And he ate Jim Crow. And when his undernourished children cried out for the necessities that his low wages could not provide, he showed them the Jim Crow signs on the buses and in the stores, on the streets and in the public buildings. And his children, too, learned to feed upon Jim Crow, their last outpost of psychological oblivion.

Donald Trump is a political carrion eater. In Tulsa, Donald Trump fed his followers that rotten old Jim Crow bird meat. They loved it. They left the arena desperate for more.

In the days to come, much will be written about Trump's rally in Tulsa and what it may reveal about his chance of re-election in November. There will of course be uninspired horse-race reporting about the polls. Reporters and journalists desperate to create a "both sides" counter-narrative may inquire why Joe Biden is not holding such rallies. There will also be obligatory and much-needed analyses and commentaries about the coronavirus pandemic and how many people may have been sickened by Trump's human petri dish in Tulsa.

But because the commentariat is still in denial about the monstrous evil of Donald Trump's regime, it will default to obsolescent habits in writing and thinking about American politics. Most journalists are either unwilling or unable to state a basic fact: Trump's Tulsa rall shows again, that his followers are literally willing to die and kill for him.

Trumpism is more than a political problem: It is a personal, cultural, spiritual and moral sickness. It is unclear whether Joe Biden, the Democratic Party, and their voters understand the nature of the challenge ahead of them in both defeating Trump at the ballot box and then seeking to remedy the societal problems that made Trump's movement possible in the first place.