Two St. Louis attorneys threatened to shoot protesters outside their $1 million home, according to the video 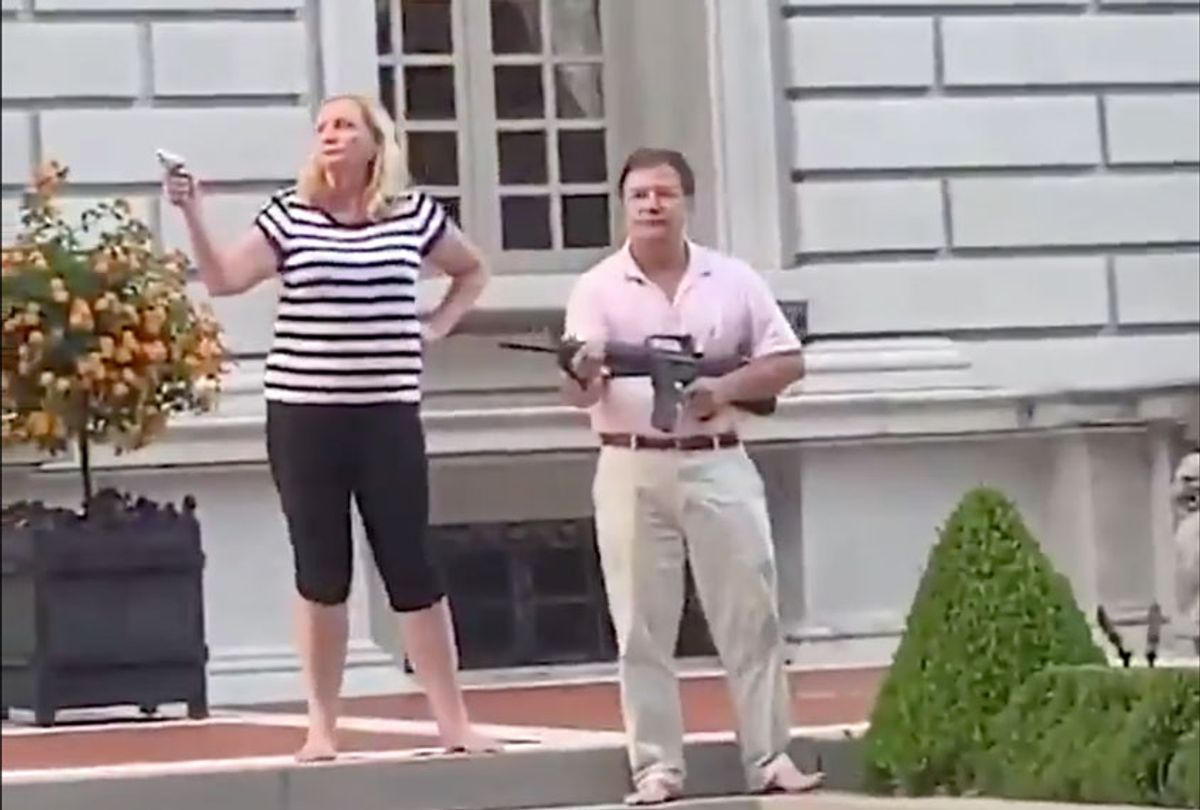 A couple in St. Louis, Missouri pulled guns on peaceful protesters passing through the neighborhood (Twitter/@ABC)
--

President Donald Trump retweeted a video showing a white St. Louis couple threatening peaceful Black protesters with a rifle and a handgun over the weekend.

Trump shared the video to his 82 million Twitter followers on Monday, one day after he tweeted and quickly deleted another video showing an elderly Trump supporter shout "white power" at a group of protesters at The Villages, a retirement community in Florida.

The new video showed Mark and Patricia McCloskey, who are both personal injury attorneys, threaten protesters with firearms as they marched past their $1 million home, according to the St. Louis Post-Dispatch.

"Private property!" Mark McCloskey, armed with a rifle he held pointed at his wife in between threatening protesters, repeatedly shouted in the video. "Get out! Private property! Get out!"

"Then call the f*cking cops, you idiot!" a protester shouted. "It's a public street."

The couple's home was recently featured in St. Louis Magazine. It is reportedly valued at $1.15 million. A day after the incident, the couple refused to respond to questions, and their law firm was boarded up.

The couple told police that the protesters broke the gate to enter their private street. St. Louis police told the Post-Dispatch that the couple called 911.

"The group began yelling obscenities and threats of harm to both victims," police said. "When the victims observed multiple subjects who were armed, they then armed themselves and contacted police."

The crowd of protesters continued to march onward after the altercation.

Police are investigating the incident. St. Louis prosecutor Kimberly Gardner on Monday said she was "alarmed at the events that occurred over the weekend where peaceful protestors were met by guns and a violent assault."

"We must protect the right to peacefully protest, and any attempt to chill it through intimidation or threat of deadly force will not be tolerated," she said. "Make no mistake: We will not tolerate the use of force against those exercising their First Amendment rights and will use the full power of Missouri law to hold people accountable."

The protest continued until marchers reached the home of Mayor Lyda Krewson, who revealed the names and addresses of people who called on her to defund the police. Krewson later deleted the video and apologized.

"As a leader, you don't do stuff like that . . . It's only right that we visit her at her home," state Rep. Rasheen Aldridge, who joined the protesters, said into a megaphone.

Protesters called for Krewson to resign.

The White House did not say why Trump promoted the video on his Twitter feed. Trump has frequently vowed to defend Second Amendment rights in his tweets.

"The right to bear arms does not give anyone the right to harass, intimidate and point guns at Americans they disagree with," Nico Bocour, a spokesperson for the Law Center to Prevent Gun Violence, told BuzzFeed News. "This is shameful and the type of irresponsible gun ownership that leads to so many deaths in this country."

Twitter previously flagged a tweet by Trump appearing to call for looters to be shot for "glorifying violence." It later hid another Trump tweet threatening violence against protesters in Washington DC.

The video streaming platform Twitch on Monday banned an account belonging to Trump's re-election campaign for violating its policies on "hateful conduct."