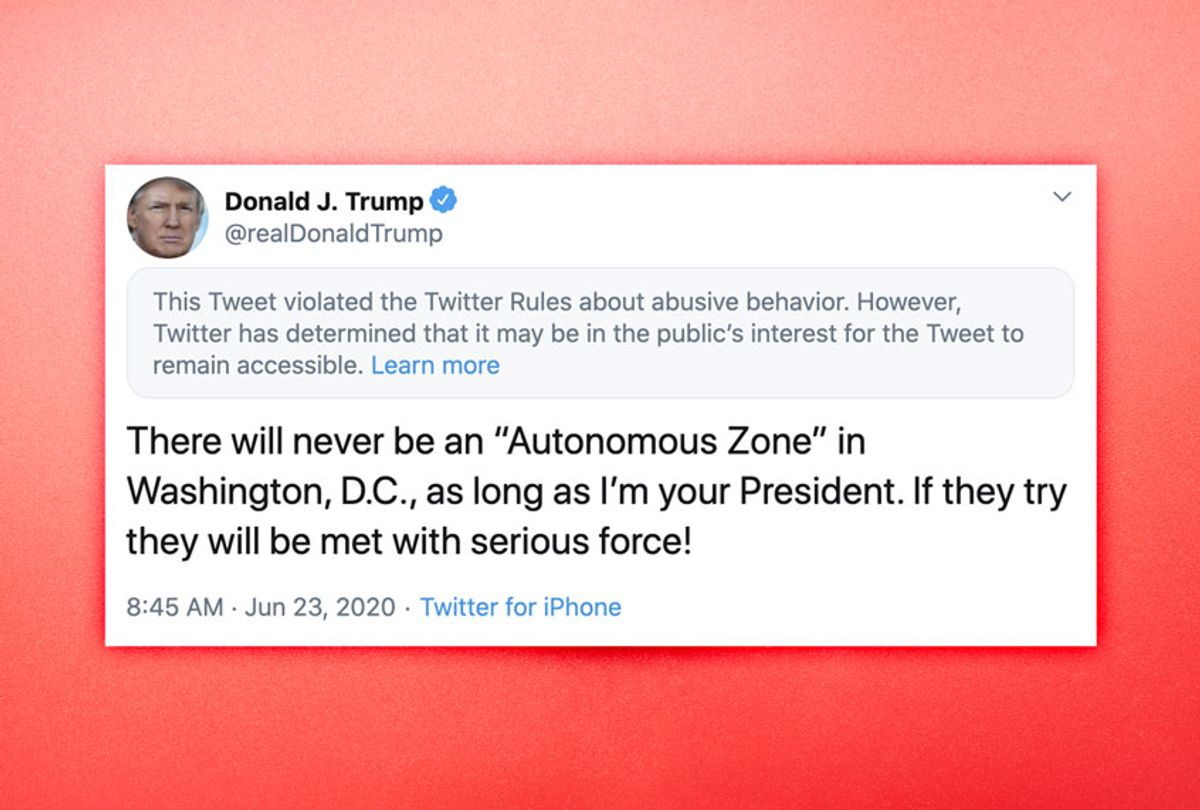 Twitter has once again moderated a tweet posted by President Donald Trump — this time by hiding it with a warning label and adding a warning notice.

"We've placed a public interest notice on this Tweet for violating our policy against abusive behavior, specifically, the presence of a threat of harm against an identifiable group," Twitter wrote. In the original tweet, Trump responded to the rumor of a police-free autonomous zone being formed in Washington, D.C., writing, "There will never be an 'Autonomous Zone' in Washington, D.C., as long as I'm your President. If they try they will be met with serious force!"

At the time of this writing, the president has not reacted to Twitter's moderation.

Last month, Twitter aroused controversy when it attached a fact-check label to a pair of Trump's tweets that falsely claimed that mail-in ballots were fraudulent. The president responded by writing that "Republicans feel that Social Media Platforms totally silence conservatives voices" and promised to "strongly regulate, or close them down, before we can ever allow this to happen." He later added, "Twitter has now shown that everything we have been saying about them (and their other compatriots) is correct. Big action to follow!"

Trump later followed through on his threat by signing an executive order instructing the Federal Communications Commission to craft a new regulation that might exempt social media platforms from Section 230 of the 1996 Communications Decency Act, which protects online platforms for being held legally responsible for speech-related content posted by their users.

This did not deter Twitter. Soon after, Trump posted a tweet about the George Floyd protests in Minneapolis, which Twitter moderated by appending it with a "public interest notice" that described his rhetoric as "glorifying violence." The tweet in question said: "these THUGS are dishonoring the memory of George Floyd, and I won't let that happen." Referencing a threat to send in the National Guard, Trump added: "any difficulty and we will assume control but, when the looting starts, the shooting starts."

Trump's latest incendiary tweet was posted after a protest movement called Black House Autonomous Zone (BHAZ) was set up in Washington, DC. Protesters also tried to pull down a statue of President Andrew Jackson using ropes, although they were stopped by U.S. Park Police and D.C. police.

BHAZ's actions recall the nascent autonomous zone formed in Seattle this month, known as CHOP (Capitol Hill Organized Protest zone) and, before that, CHAZ (Capitol Hill Autonomous Zone). Those protesters are demanding, among other things, investigation of past and current cases of police brutality in Seattle and Washington (including people who were sexually harassed or abused by officers or prison guards); releasing all prisoners incarcerated for marijuana-related offenses and expunging their records; allowing prisoners to vote; rent control; free college; free public housing and socialized health care.

Seattle Mayor Jenny Durkan has since said that she will work with community leaders and African American-led groups to peacefully dismantle CHOP.