Desperate, Trump and the Republicans will try to win by declaring war on the cities 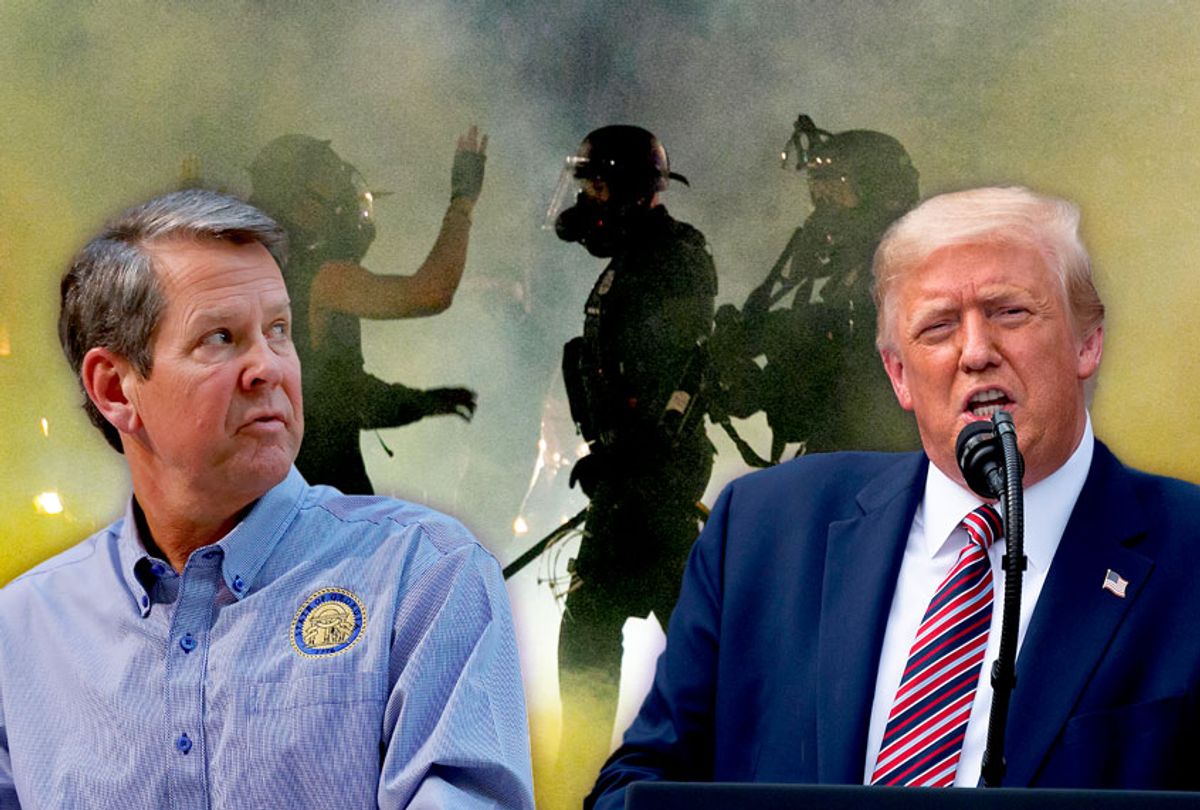 Donald Trump is convinced that the reason more American voters aren't swooning for his racism is because he's just being too subtle about it. Forget the polling evidence that shows Trump's overt racism is turning voters off. He just knows, in his heart of hearts, that the fundamental dynamics of American politics haven't changed since the Reagan administration and voters want him to draw a clear line in the sand on racial politics. So he turned up the dial on Thursday in a bizarre rant during a clearly illegal campaign event disguised as a "press conference" in the Rose Garden.

"The Democrats in D.C. have been and want to at a much higher level abolish our beautiful and successful suburbs," Trump said, claiming that "your home will go down in value and crime rates will rapidly rise" if Democrats get their way.

Even Trump isn't nutty enough — yet — to seriously suggest that the Democrats have some secret plan to bulldoze the suburbs. What Trump's talking about, as Jonathan Allen at NBC News explained, is "an Obama-era rule designed to combat racial discrimination in housing."

Which is to say that Trump's campaign strategy is to tell white suburbanites that if they don't vote for him, Black people might move into their neighborhood. What makes suburbs "beautiful," apparently, is racial segregation.

"His message is clear: 'Elect me and I'll keep Black people out of your neighborhoods and out of your schools,'" Democratic strategist Michael Starr Hopkins told Allen.

Down in the polls and desperate, Trump and his fellow Republicans have decided to go all-out in trying to stoke a war between rural and suburban areas — imagined as primarily white, which in itself is outdated — and more racially diverse cities. Republicans have long tried to appeal to white voters by painting American cities as terrifying places, and under Trump all subtlety has been stripped away from that pitch, along with any plausible deniability that this is anything but racist fear-mongering.

Instead, with less than four months to go until the election, Trump and his fellow Republicans are declaring war on American cities, and hoping that rural and suburban white people still hate the cities — and the Americans who live in them — so much that they're willing to ignore the spreading pandemic and the cratering economy to indulge their racist impulses one more time.

This war language is not a rhetorical flourish, either. The Department of Homeland Security has been targeting the city of Portland, Oregon, sending waves of camo-clad federal police out to suppress the protests that have been going on in that city for more than a month now. These semi-secret police have reportedly terrorized protesters with "arrests" that are better described as kidnappings (because no charges are filed) and random violent assaults.

Acting DHS Secretary Chad Wolf justified the police presence by claiming that "Portland has been under siege for 47 straight days by a violent mob" and that these "lawless anarchists destroy and desecrate property."

Those claims are false on the merits, not to mention deeply disturbing. And to be clear, local and state officials don't want these goons on the streets, and don't view them as a welcome presence restoring order.

As Sen. Ron Wyden, D-Ore., tweeted, "Trump and Chad Wolf are weaponizing the DHS as their own occupying army to provoke violence on the streets of my hometown because they think it plays well with right-wing media."

Portland Mayor Ted Wheeler has made it quite clear he wants these federal forces to leave and agrees with Wyden that the "heightened troop presence" is "a coordinated strategy from the White House" to cause violence and chaos in his city.

Oregon Gov. Kate Brown, a Democrat, has also decried the situation as "political theater from President Trump" and "a blatant abuse of power."

Trump has made no secret of his belief that images of police cracking skulls and tear-gassing protesters, to be endlessly recycled in Fox News clips and campaign ads, would help his re-election campaign. That's why he ordered peaceful protesters tear-gassed outside the White House. He also blatantly encouraged local police in Tulsa to attack peaceful protesters outside his disastrous rally there last month. Protests in Tulsa were modest and peaceful and the police response was restrained, so it follows that he's turned to unaccountable federal forces to generate the wished-for violence, since he can directly order them to do it.

On Thursday, Kemp literally sued the city government of Atlanta for passing am ordinance recommending the use of face masks to slow the spread of the coronavirus, even though there's an overwhelming medical and scientific consensus that mask mandates evidence save lives.

Kemp justified this lawsuit by claiming he's trying to aid "Atlanta business owners and their hardworking employees who are struggling to survive".

This is nonsense. If anything, masks can help keep businesses afloat by making it possible for people to engage in daily shopping and normal commerce much more safely. That's why business owners across the country, from Walmart on down to the corner store, are implementing their own mask policies and demanding mask mandates, in the hope that people will be more willing to go out and spend money if they can be assured other customers are wearing masks.

No, the likelier explanation is that Kemp, like Trump, is waging war on the residents of a major American city, one that, is, not coincidentally, majority Black and poses a significant threat to Republican power. Atlanta's voters nearly propelled Democrat Stacey Abrams to victory over Kemp in the 2018 gubernatorial race (and probably would have, absent the cheating). Atlanta's voters are the reason why there's some slim but reasonable hope that Georgia could go for Joe Biden over Trump in November.

Kemp's action, which at least implicitly encourages the spread of a deadly disease in a major American city cannot be separated from Trump's overtly racist efforts to paint the cities as lawless hellholes that need to be brought under the boot of authoritarian control. Kemp is no doubt aware that Black Americans are many times more likely to die of COVID-19 than white Americans — and he's not just passively accepting that fact but taking concrete, active measures to worsen that disparity.

It's hard to describe what is actually happening in this country without sounding hyperbolic. But this is where we are: Republicans under Trump have whipped themselves into a racist hysteria, and have decided nothing short of straight-up warfare on American cities can make the world right again.

Witness, for instance, the wacky nonsense New York mayor and current Trump flunky Rudy Giuliani addressed to Salon's Roger Sollenberger during a text interview this week. Giuliani accused Black Lives Matter activists, who are protesting police brutality, of having an "extreme Marxist agenda" and of forming a conspiracy to steal property from white people.

"Blacks are the preferred class they get life time salary, no one else, and they can claim property," Giuliani declared, o this outlining this alleged conspiracy's alleged intentions.

This paranoia echoes the claims by Mark and Patricia McCloskey, the St. Louis couple who threatened to shoot Black Lives Matter protesters who were walking by their house earlier this month. The couple justified these murderous threats by claiming they felt threatened and that their "private property" was under assault. (Whereas an objective observer might note that the protesters were walking along a public street, and hadn't threatened anyone's home.) Trump has publicly supported the couple, lending a White House seal of approval to white people who make random false claims that they're protecting private property, when what they're really doing is trying to shut down anti-racist protests with threats of lethal violence.

Will it work for Republicans to go all-in on blatant racism and anti-urban rhetoric? Probably not. Public-opinion polling strongly indicates that most voters — including white people — reject Trump's approach to protests, and that's especially true among the legendary suburban women who are likely to be decisive in this election.

But in a sense, whether or not it "works" isn't even the main concern. We have a major political party waging war on its fellow citizens, and treating cities as enemy territory to be violently conquered. Trump and his Republican followers appear ready to spread disease on purpose in order to do harm to Americans who oppose them politically. These are not folks who are likely to accept a peaceful transfer of power if and when Republicans get destroyed at the ballot box in November.

If Republicans are happy to send troops into cities just to create B-roll footage for a campaign ad, we also must contemplate how far they will go in order to reject the will of the voters on Election Day.