The happiest of Pillsbury cake mixes is now available in chocolate (!) and dominating Pinterest boards & our souls 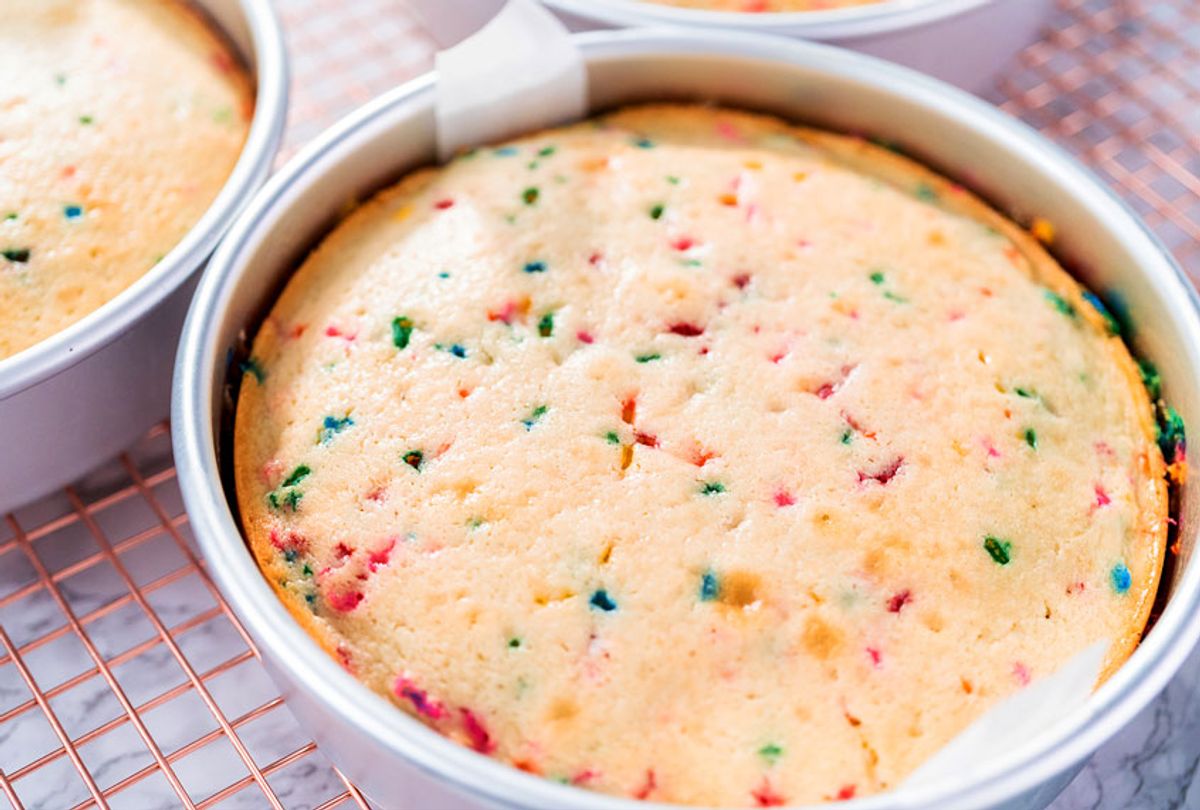 This is the week where we realized that everything is cake. Social media is currently one long montage of knives slicing into everyday objects — Crocs, Coca-Cola cans, Filet-O-Fish sandwiches — only for the camera to zoom in, showing they're actually constructed from flour, frosting and copious amounts of fondant.

All corners of the internet have now clung to the trend; there are Twitter threads of K-Pop groups as cake, "Hannibal" jokes that write themselves, and revised versions of the Biblical tale of Solomon recommending a baby be cut in half. And all I have to say is this: If you cut me open and it's revealed that I, too, am merely cake — I genuinely hope that I am filled with Funfetti.

Funfetti, a portmanteau of "fun" and "confetti," was developed by Pillsbury in 1989. The original commercial features the Pillsbury Doughboy pushing a purple tub of frosting with a short, lit fuse sizzling from the top. "Want a bigger bang out of your next birthday?" the deep-voiced narrator queries, before the frosting bursts like a firecracker, revealing a cake flecked with neon sprinkles. "Nothing says lovin' like Funfetti."

And indeed, the OG Funfetti flavor —featuring those tiny saccharine sprinkles suspended in light, boxed white cake — became synonymous with kids' birthday parties. These were the kind of birthday parties held at dimly lit roller rinks and neighborhood swimming pools, where the achingly sweet forkfuls of cake cut through the lingering taste of chlorine in your mouth, and you and your friends would all pose for a photo with burnt skin, and sprinkles stuck in your teeth.

As Molly Yeh, host of Food Network's "Girl Meets Farm" and known for her homemade version of the cake, told the New York Times, "In the 1990s, to have a successful birthday party, you had to beg your mom for Funfetti cake. It was as if chocolate and vanilla no longer existed."

There was soon seemingly Funfetti for every occasion, but then in 2018, as The Wall Street Journal reported, J.M. Smucker Co., which had owned Pillsbury since 2004, sold the baking business "to a private-equity firm for $375 million, including debt, mirroring moves by other food companies to divest decades-old brands whose sales are in decline because of changing consumer tastes."

According to The Wall Street Journal, Mark Smucker, the chief executive of J.M Smucker Co., said he hadn't invested much in Pillsbury during the year prior to the sale because it would have hurt profit. "We consciously chose not to go deep," he said on an earnings call, stating that the business had entered a protracted decline after several years of growth as consumers started buying freshly baked goods, leaving boxed cake mixes behind.

Don't call it a comeback

But since the sale to the Connecticut-based private equity firm, Brynwood Partners, Funfetti has returned to grocery shelves with a vengeance.

In January, Coffee-Mate released a Funfetti-flavored coffee creamer (it apparently tasted like birthday cake, sans the trademark sprinkles). Earlier this month, shoppers started scooping up Pillsbury's new Funfetti Chocolate Cake & Cupcake Mix, and in August, the company will be releasing a colorful new cereal that will be "true to the Funfetti cake taste."

While it remains to be seen if the new products will put Pillsbury in the black, for many people, the love of Funfetti — and its variations and imitators — never subsided.

Larissa Neto is an Atlanta-based baker whose Funfetti-inspired creations, like this Funfetti bread, have garnered her a steady Instagram following. Neto says that there are several practical factors that help explain the enduring appeal of the flavor, namely the extra crunch and hit of sugar the sprinkles add, as well as the obvious visual appeal.

But there's something else that is a little more difficult to quantify, a certain element of nostalgia inherent to the product.

This corporate play for nostalgia has appeared in several ways, from Pizza Hut returning to the logo they used from 1967 to 1999, to the re-release of New Coke. In the realm of sprinkle-filled desserts, the kids who loved Funfetti the first time around are now adults and are looking for (or creating) products that hearken back to those years.

For example, pastry chef Christina Tosi's Birthday Cake, which was Funfetti-inspired, is what helped put her bakery Milk Bar on the map back in 2008, while as the New York Times reported in 2016, according to Pinterest, in the last year, users 25 to 34 years old had saved 260 percent more Funfetti ideas than the year before.

This renewed interest in Funfetti has made its way from Pinterest pages into home kitchens, as well.

Georgia-based travel writer Caroline Eubanks said that she hasn't ever had much of a sweet tooth, but that Funfetti's nostalgia factor made it an enduring favorite.

"After college I moved to Australia for a year," she said. "It was my first time being away from home for so long and my parents sent me a care package with Funfetti mix and other favorite items from home. They probably spent $50 to mail items totaling in $10 of value. But it made me feel less homesick."

Faith Kramer, an Oakland-based journalist, says that Funfetti remains a favorite for her 32-year-old son. She made him a Funfetti-inspired cheesecake for his bachelor party in 2017. "Also, he lives in London now, and whenever his wife visits, she picks up the cake mix and frosting as a surprise for him," Kramer said.

There is certainly  a contingent who have forsaken Funfetti for what they perceive as more "adult" desserts; but as a Reddit user responded to a query about whether 30 was too old for a Funfetti birthday cake, "I'll eat [F]unfetti until my deathbed." And why not? As the world around us continues to look pretty grim, why not decorate whatever you can with sprinkles?