Audiences are eating up music and TV that evoke the '80s and '90s. Can "nostalgia marketing" work for dinner? 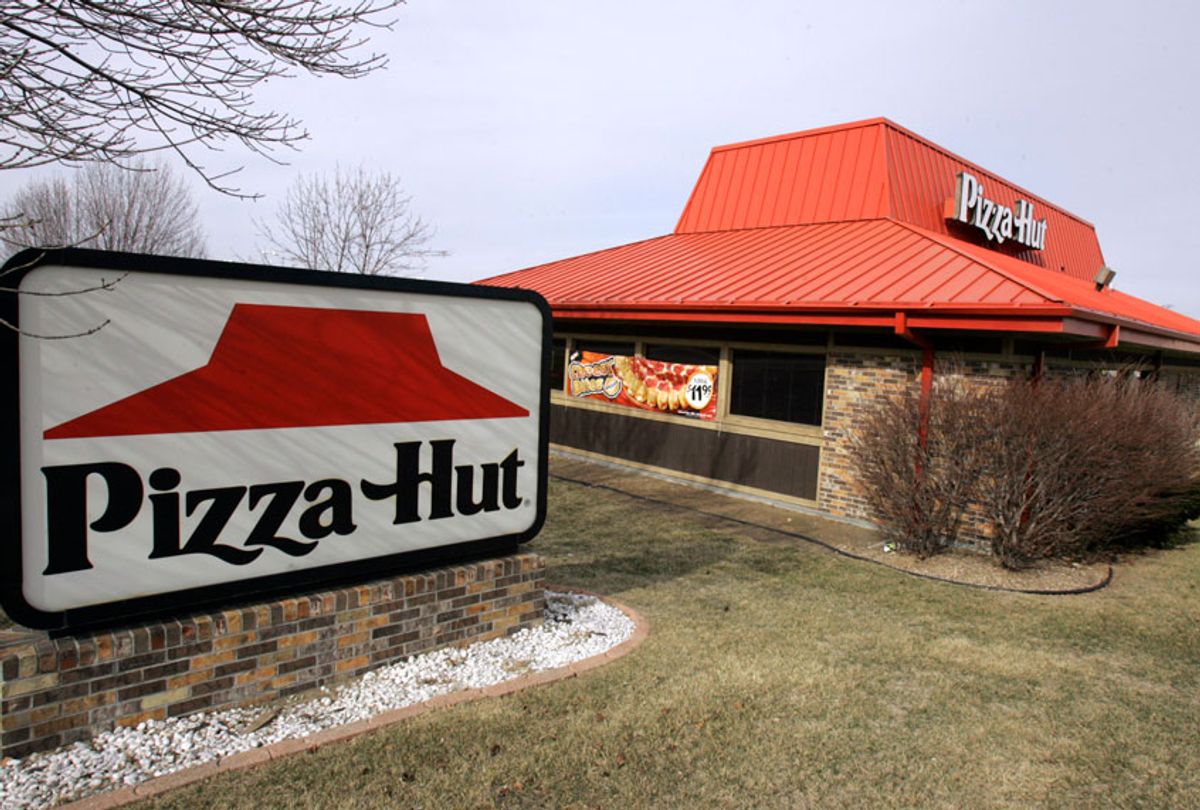 This week, Pizza Hut will return to using its distinctive logo — red roof , black letters — across commercials and print marketing. Used from 1967 to 1999, it's the branding identity that, for large swaths of Americans, represents the Pizza Hut of their childhood.

In an interview with Nation's Restaurant News, Pizza Hut's chief brand officer Marianne Radley said the retro look tested well with diners, and reminds people that the chain is the "OG of the pizza category."

But where those brands were built on takeout and delivery, Pizza Hut was developed as a standalone dining destination. The shape of a Pizza Hut building is iconic, down to the distinctive red roof shape that identifies a Hut even after it's ceased to shelter Pizza. (There's a whole category of online photos tagged #UTBAPH, "used to be a Pizza Hut.") When I drive by one, I can immediately envision the interior, too: exposed brick walls, fake hanging plants, green and white checkered tables and burnt-red pleather booths.

So many kids born in the '80s and '90s, including myself, once sat in those booths, eating cheese-heavy personal pan pizzas earned through BOOK IT! reading challenge points. I sat there, too, for family pizza night and elementary school birthday parties where we'd listen to Britney Spears on the jukebox — a fixture in most Pizza Hut locations — and split a two-topping pan pizza. The pies were still brought to the table in skillets then, and the crust would exit the pan simultaneously grease-soaked and crisp, which to this day is a distinctly crave-worthy flavor sensation.

But in the last decade, with more and more competition for delivery dollars, Pizza Hut began to stray from its pan-fried and blistered-cheese origins. In 2014 the company attempted a huge makeover in an effort to appeal specifically to millennials — pizzas began to include more upscale or trendy ingredients like asiago crusts, Sriracha honey drizzle, Peruvian cherry tomatoes. Unsurprisingly, the play didn't work. There are so many other places to go for artisan pizza, the kind you serve to a roomful of acquaintances you want to impress.

After the artisan menu makeover didn't take off, executives went back to the drawing board and determined they needed to focus more on the "general customer" — the basic pizza stalwarts who still appreciate a plain sauce, cheese and topping option — rather than those interested in "flavor exploration." Goodbye Sriracha; hello melted cheese-stuffed crusts.

Sales have flagged in the subsequent years, but now the brand has the opportunity to tap into a sales hook  potentially more powerful than aspirational ingredients: nostalgia.

Audiences are definitely primed for it. As Salon's Mary Elizabeth Williams pointed out earlier this month, the pop charts are dominated this summer by former teen stars like Ariana Grande, Selena Gomez and The Jonas Brothers who haven't tried to outrun their pop pasts. "The Brothers have wisely integrated their past into their present, appealing to the original fans who taped their posters to walls while earning some overdue respect from their former naysayers," writes Williams. "What's interesting about it all is that while the brothers have changed, the music itself is remarkably consistent."

And we're experiencing a flash of particularly good nostalgia-fueled television aimed at older millennials and younger Gen Xers: "PEN15," "Everything Sucks!" (a Netflix coming-of-age series that drips with early '90s music references), "Derry Girls," and, of course, "Stranger Things," which just teamed up with Coca-Cola to release a collector's pack of New Coke, a product that originally launched (and majorly flopped) in 1985.

New Coke's reception is certainly warmer than it was 30 years ago. After doctoring their original formula to compete with Pepsi, consumers said that New Coke tasted too sweet. Coke's customer hotline was flooded thousands of complaints and, within three months, the company returned to their original recipe. In a nostalgia play of their own, the company then called the re-release "Coca-Cola Classic," and incorporated the brand's old cursive font and glass bottles.

In customer reviews on the New Coke store website, designed to look like a throwback to an early Internet webpage, people have left comments like, "This is so great! I loved New Coke when it came out I was in middle school...it would be perfect to relive those days for me and so many others!" and "Loved New Coke in 1985 and still love it. PLEASE BRING IT BACK!!!"

It's unclear whether our collective palate has changed so much over 30 years that New Coke actually tastes good now, or whether there's always been a contingent of soda lovers eagerly awaiting its return, but one thing is certain: While nostalgia may motivate someone to buy a collector's pack of soda — the kind of purchase where you can drink one just to say you have, then stick the rest on a shelf with your Ghostbusters action figures — convenience pizza is ultimately for eating. Nobody wants to save and display their dinner.

Furthermore, I'm not convinced you can brand food products to sell in the same way Target sold out of limited-run Lisa Frank pajamas. One barrier is that the way we eat has changed dramatically. While recent market research shows that millennials especially prioritize convenience when it comes to making dining decisions, pizza is no longer the easiest delivery option, as apps like Postmates, Uber Eats and DoorDash enable users to order takeout from most restaurants.

But on a more basic level, for nostalgia to sell the food we eat, the  product needs to prove itself worth returning to. The basic soft serve ice cream cone of childhood is always going to be good, no matter when you eat it. It was never bad, even if gelato and artisanal popsicles made it seem less cool by comparison for a while.

In Pizza Hut's case, the return to the vintage branding may prompt some curious delivery calls from those who want to taste their childhoods again. But is a return to pizza innocence even possible? Regardless of how the logo on the box is designed, the pizza inside probably won't taste the same to me now as it did when I was nine, sitting in the red pleather booth with Britney Spears singing in the background, rewarding myself for meeting my elementary school reading goals.

Right now, scattered all across the country are buildings that used to be Pizza Huts but are now something new — sub shops, Chinese buffets. Maybe it's enough to know what they once were, without expecting them to serve up the same memories forever. (Hello, Liquor Hut.) You can recognize what that building shape used to mean — and take comfort in knowing the roof is still red somewhere beneath its new paint job — without ever having to go inside.