Jonas Brothers get older, but their songs stay the same age

The pop landscape is dominated in part by former stars of the middle school circuit, for good reason 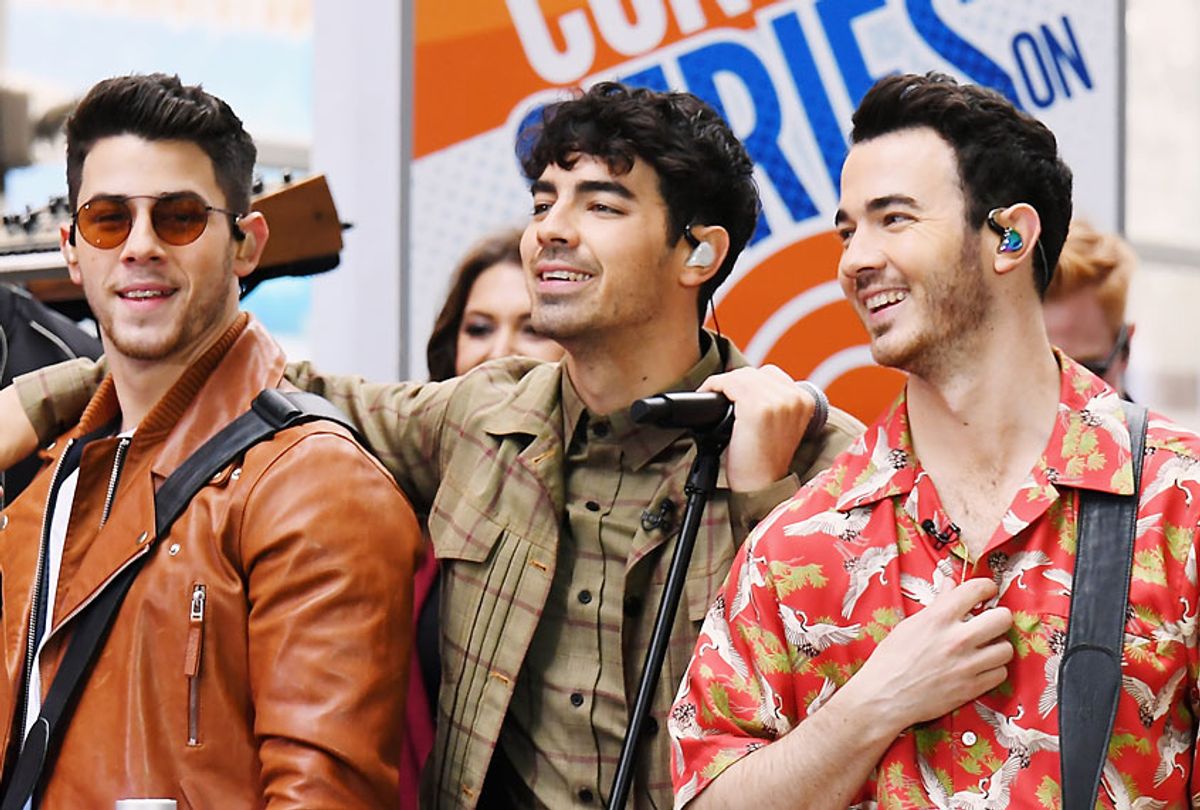 It used to be that there was no crueler fate than to be blessed with teen pop stardom — and then become an adult. The once squeaky clean has-been struggling to be taken seriously as a grownup is a durable fictional trope, one that does have a string of real life fizzled careers, public meltdowns and sad comeback tours in its evidence file. But when two former superstar Disney acts emerged this past month with cleverly self-referencing projects, the results didn't bury their confectionary former selves. They affirmed them.

If 2019 gives us nothing else, we can thank it for bringing back the Jonas Brothers. A dozen years ago, the then-adolescent trio from New Jersey were the biggest thing to happen to little girls since silly bandz. As their new Amazon documentary "Chasing Happiness" attests, at their peak, they were filling arenas, releasing platinum selling albums and causing outbreaks of hysteria wherever they went. Ask any parent of a Gen Z kid — that "JONAS OR BUST" mania flashback in the opening of "Blockers" is too real.

But the brothers were also a music industry punchline for their purity rings and Disney Channel sitcom success. (One of the film's most savage moments features a clip of Russell Brand referring to them as "God's favorite virgins.") No wonder it stopped being fun. So they grew up and pursued their solo paths on the personal and professional fronts. Nick got jacked; Kevin had kids.

Yet the story of the group both before and after their youthful peak reveals them as a truly talented trio of serious musicians who happen to make insanely catchy songs. You can't hear Joe's hits with his group DNCE and not catch the vestigial bops of glorious teen pop. "Cake By the Ocean" may have a double entendre and an F bomb, but its roots are pure "Camp Rock." And now, nearly a decade after their last collaboration, their irrepressible earworm "Sucker" is a fizzy extravaganza that would be perfectly at home at a fifth grade slumber party.

With both their documentary and new musical material, the Brothers have wisely integrated their past into their present, appealing to the original fans who taped their posters to walls while earning some overdue respect from their former naysayers. What's interesting about it all is that while the brothers have changed, the music itself is remarkably consistent.

That's a different tack than the one Miley Cyrus takes in her recent turn on "Black Mirror." In "Rachel, Jack, And Ashley Too," Cyrus plays a peppy pop star, dispensing ersatz female empowerment messages and makeup tips while shimmying in a lilac wig. Ashley is a product — so much so that she can be duplicated in a talking doll and replaced by a hologram. And as Ashley and writer Charlie Brooker would have it, cheerful anthems for awkward teens are meaningless; she'd be more fulfilled doing Nine Inch Nails songs and stage diving, as if the 2000s had never happened. Cyrus herself however seems to have a sense of humor about it all, dropping a winkingly slick Ashley-O persona video "On a Roll" earlier this week.

I'm not going to try to quantify the cultural value or emotional impact of a Trent Reznor track in relation to say, the Spice Girls, but what I can safely say is that clever, made-to-be-blasted pop music is not exclusively the terrain of 10-year-old girls, not should it be dismissed just because 10-year-old girls happen to like it. I am far from alone in this.

Whether your "I may be old but I saw all the cool bands" t-shirt agrees or not, ex-teen stars are both dominating and defining our musical tastes right now. (Meanwhile, spooky current teen Billie Eilish has the #2 single in America.) You may have heard of a former "Degrassi: The Next Generation" cast member by the name of Drake. In addition to Miley and the Jonas Bros, former Nickelodeon and Disney performers Selena Gomez, Ariana Grande and Hayley Kiyoko have in the past few years enjoyed remarkable chart and touring success. Taylor Swift and Justin Bieber got the last laugh on the haters by refusing to burn out by the time they were old enough to vote; the former members of One Direction likewise continue to keep cranking out hits. And while she seems to have appeared fully formed like a hit-making Athena, Rihanna was a teen star too, releasing her first two albums before the age of 20. Collectively, the veterans of the Club Penguin generation have injected more unapologetic fun into the ex-teen star beat than we've seen since Britney and Christina were dominating "TRL."

In their different ways, both "Jessica Jones" and "The Other Two" have this year deftly addressed the price of young stardom. On "Jessica Jones," Trish Walker is a woman still dealing with the fallout of her stolen childhood in the most dangerous ways. But on "The Other Two," viral heartthrob Chase Dreams is simultaneously guileless and grounded, the least damaged and often most mature individual in his inner circle. He has his struggles, but his sunshiny personality isn't an act.

Every successful former teen pop star has had to endure their awkward years and acting out phases on the unflattering glare of the world's scrutiny. It took Miley years before people got over her sheet-draped Vanity Fair spread. And the path has not been equally straightforward or easy for everyone, as Demi Lovato has candidly shared in her own work. But as the teen titans of the mid-2000s have grown, so have their audiences. They've come of age in a word of uncertainty and divisiveness and the incredibly mixed bag of living life on social media. Can you blame anybody for appreciating the simple pleasure of a song that's as joyful and sweet as after school milk and Oreos?

Getting older, settling down, gaining life experience and depth — these things don't have to stand in opposition to all that's come before. Perhaps no pop music moment this year so far better exemplified that than when the Jonas Brothers performed on "SNL" in May, sliding effortlessly from their new song "Cool" into their classic Disney-era hit "Burnin' Up." The audience screamed, and the little girls understand why. A sassy hook is just as real as a melancholy chord progression, and it never grows old.