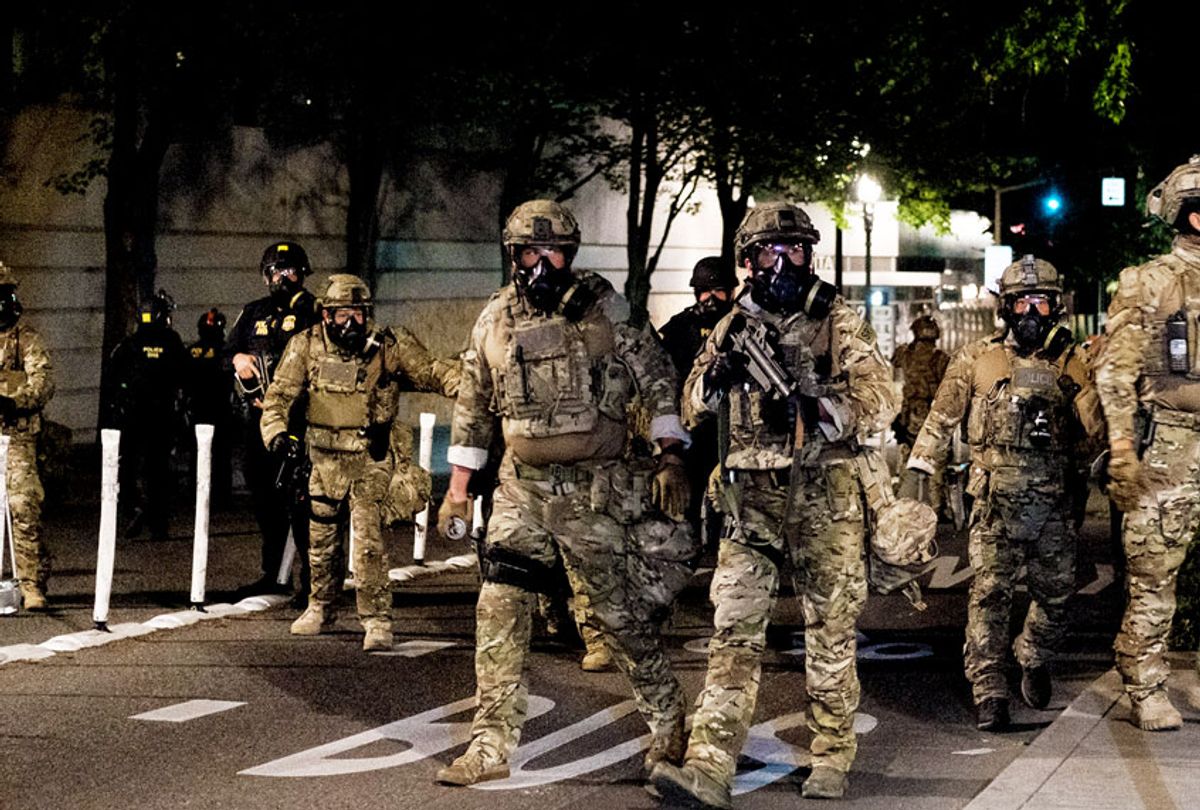 The Trump administration is poised to expand the deployment of federal authorities to more U.S. cities, even though elected officials have blamed their presence for inflaming confrontations with protesters in Portland.

Federal officers have been recorded snatching protesters off the streets into unmarked vans in Portland, severely injuring protesters with non-lethal munitions, firing tear gas in defiance of a state ban, unleashing a flashbang on a group of mothers that formed a human wall to protect protesters and beating a Navy veteran who tried to remind the officers of their oath.

The officers, who were ostensibly deployed to protect federal property, are not trained to deal with mass demonstrations, according to a memo obtained by The New York Times. They have been filmed confronting protesters who are not on federal property. City and state leaders have condemned the violence and demanded that the administration withdraw its forces.

But White House chief of staff Mark Meadows announced Sunday that the administration was instead preparing to expand its deployment to even more cities headed by Democrats.

"You'll see something rolled out this week as we start to go in and make sure that the communities — whether it's Chicago, or Portland, or Milwaukee or someplace across the heartland — we need to make sure their communities are safe," he told Fox Business host Maria Bartiromo.

Meadows did not elaborate on what he meant by his comment, but CBS News reported that the Trump administration planned to send 175 federal officers to cities run by Democratic mayors to "assist local police with what they call unrest."

The Trump administration has cited the president's June 26 executive order to protect federal property and statues to justify the situation in Portland. But Meadows suggested that the administration may try to expand its legal authority to grow the federal presence in cities.

"The statues are one thing, but it's really about keeping out communities safe," Meadows said, "and the president is committed to do that."

"If we get the same kind of intelligence" in other cities, Cuccinelli said, "we would respond the same way."

"This is a posture we intend to continue not just in Portland, but in any of the facilities that we're responsible for around the country," he said in another interview with NPR.

But Portland Mayor Ted Wheeler, a Democrat, said the protests were losing steam before the federal deployment blew up tensions "like a powder keg."

"The president has a complete misunderstanding of cause and effect," Wheeler told NBC News. "What's happening here is we have dozens, if not hundreds of federal troops, descending upon our city. And what they're doing is they are sharply escalating the situation. Their presence here is actually leading to more violence and more vandalism, and it's not helping the situation at all. They're not wanted here. We haven't asked them here. In fact, we want them to leave."

"The current escalation of fear and violence in downtown Portland is being driven by federal law enforcement tactics that are entirely unnecessary," Rosenblum said in a statement.

"Under the direction of the Trump administration, federal agents are terrorizing the community, risking lives and brutally attacking protesters demonstrating against police brutality," Kelly Simon of the Oregon ACLU said. "This is police escalation on top of police escalation."

Three House committees also called on the inspector generals at the Justice and Homeland Security departments to investigate whether the authorities had abused their power.

"The legal basis for this use of force has never been explained — and, frankly, it is not at all clear that the attorney general and the acting secretary are authorized to deploy federal law enforcement officers in this manner," the letter said. "The attorney general of the United States does not have unfettered authority to direct thousands of federal law enforcement personnel to arrest and detain American citizens exercising their First Amendment rights."

Trump argued on Twitter that he was "trying to help Portland, not hurt it."

"Their leadership has, for months, lost control of the anarchists and agitators. They are missing in action. We must protect Federal property, AND OUR PEOPLE," he tweeted.

In another tweet, he hinted at expanding the deployment.

"Look at Portland, where the pols are just fine with 50 days of anarchy. We sent in help. Look at New York, Chicago, Philadelphia. NO!" he wrote.

"They're Democrat-run cities, they are liberally run," he added in an interview with Fox News. "They are stupidly run."

But Oregon Gov. Kate Brown, a Democrat, said the federal presence was only "adding gasoline to the fire."

"The Trump administration needs to stop playing politics with people's lives," she said Sunday. "We don't have a secret police in this country. This is not a dictatorship. And Trump needs to get his officers off the streets."

"Unidentified stormtroopers. Unmarked cars. Kidnapping protesters and causing severe injuries in response to graffiti. These are not the actions of a democratic republic," Speaker of the House Nancy Pelosi, D-Calif., said. DHS "actions in Portland undermine its mission. Trump & his stormtroopers must be stopped."