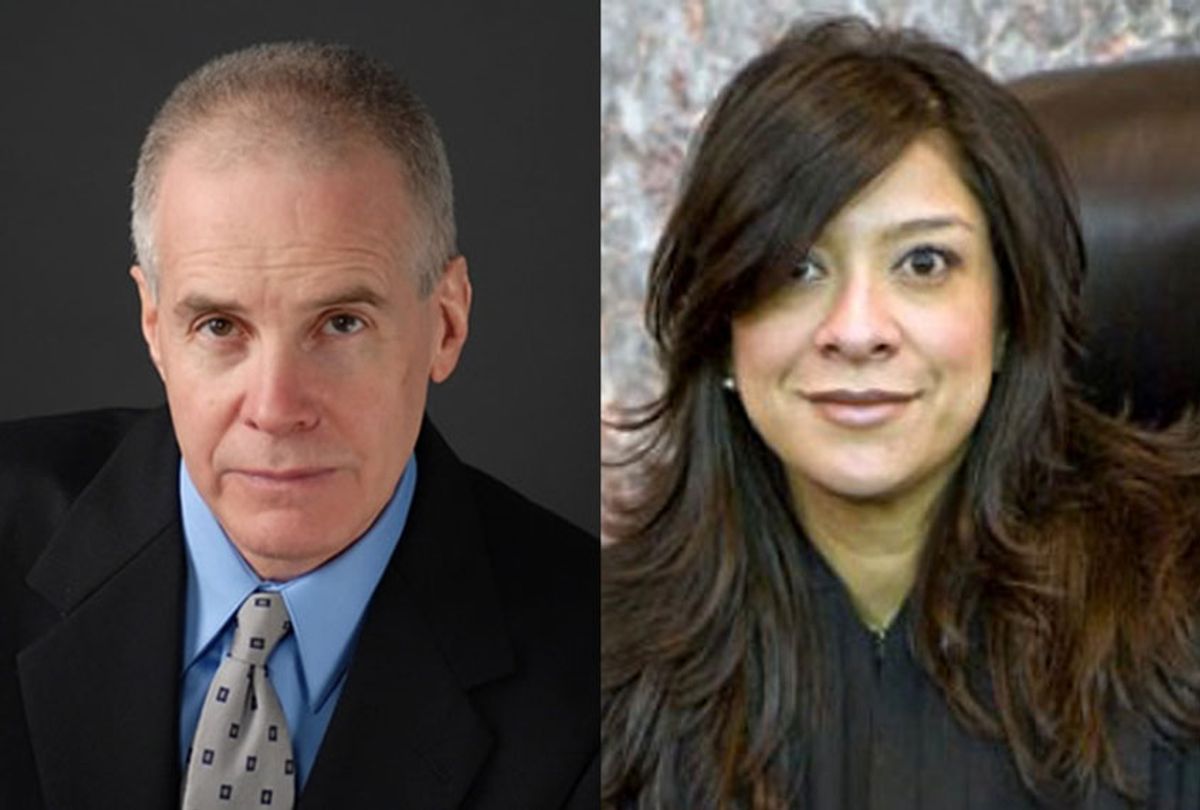 When the son and husband of Esther Salas, a federal judge in New Jersey, were shot at home on Saturday evening by a man dressed as a Fed Ex driver, attention first focused on Salas' role in a financial case involving Deutsche Bank and Jeffrey Epstein. Soon, however, it turned out that the assailant — who took the life of Daniel Anderl, Salas's 20-year-old son — had no involvement in that case. Instead, he was Roy Den Hollander, an attorney and notorious "men's rights" troll who had a long history of filing frivolous lawsuits trying to "prove" that men, not women, are the real victims of sex discrimination. After what appears to have been an attempted assassination of Salas, Den Hollander went home and killed himself.

Den Hollander's previous cases involved his efforts to sue nightclubs for having "Ladies Nights," where they charge women lower prices for admission and drinks, and to sue Columbia University simply for having a women's studies program. He also accused his ex-wife, a Russian-born woman who dumped him once her green card application had been approved, of being part of a global crime syndicate that included her divorce lawyers, a bank in Cyprus, a New York police detective and a topless bar. (That case, unsurprisingly, was dismissed.) As a New Yorker profile in 2007 made clear, Den Hollander was obsessed with the idea that he was entitled to having younger women sexually available — or, in his words, "waiting to give delights, understanding and loyalty." Since that wasn't working out, he spiraled into tantrum and sued everyone in sight, desperately seeking prove that men are the real victims of oppression.

For much of Den Hollander's career as a professional misogynist, liberal observers treated him as a joke. I certainly made fun of him at my former blog for his Ladies Night suits, as the guy who wanted to believe that "the stripper really likes him." Den Hollander was once the butt of a joke on a segment for "The Colbert Report." On Fox News, however, he was greeted as a hero, brought on to claim that women "are a suspect class" who "walk all over [men] in their stiletto heels."

But this shooting is a sobering reminder of a grim reality, which is that the misogyny that Den Hollander was peddling can far too easily go dark and turn to violence. Cheered on by an online community of bitter woman-haters who blame feminism for all their woes, men like Den Hollander frequently turn to outright terrorism against institutions and communities who didn't give them all the goodies to which they think their sex entitles them.

The case that Den Hollander had before Salas, a suit challenging the fact that Selective Service registration only applies to young men, was yet another feeble effort to prove that men are the victims of sex discrimination, even though there hasn't been a draft in decades. Nonetheless, Salas actually allowed the case to go forward, even though Den Hollander called her a "lazy and incompetent Latina judge appointed by Obama" on his website in 2019. The case was transferred to other lawyers last year.

Whatever the details of this tragic incident may be, the larger takeaway is obvious: Den Hollander was just the latest in a long line of men who would rather blame feminism than themselves for their personal failings, and who lash out violently at the world in acts of murder or terrorism.

The most famous of these, of course, was Elliot Rodger, who went on a 2014 shooting spree in Isla Vista, California, killing six people and injuring 14 others, apparently seeking revenge for his perception that "you girls have never been attracted to me." Rodger identified as an "incel," which is short for "involuntarily celibate" but better describes an ideology of men who believe that, because of feminism, they are being denied sex with women of the "hotness" caliber they believe they deserve.

There have been plenty more such attacks: Chris Harper-Mercer murdered nine people at an Oregon community college in 2017, citing Rodger as an influence. Scott Beierle shot up a yoga studio in Florida in 2018, killing two women and injuring four other people. Alek Minassian ran his van into a crowd in Toronto in 2018, killing 10 people and injuring 16, and also cited Rodger as an influence. Emmanuel Deshawn Aranda threw a 5-year-old boy over a railing at the Mall of America in a fit of outrage that women wouldn't have sex with him. Earlier this year, a teenager who identified as an "incel" attacked women in a Toronto massage parlor, killing one. In May, 20-year-old "incel" Armando Hernandez live-streamed his shooting spree at an Arizona shopping mall, apparently targeting heterosexual couples. Just last month, another "incel" blew his hand off trying to make a bomb designed to kill "hot cheerleaders".

Well before Rodger, there was George Sodini, who shot up a gym in suburban Pittsburgh in 2009, killing three women and injuring nine others. He was angry because — guess what! — he felt entitled to sex with the gym-toned women he saw there, and wasn't getting any.

Den Hollander is also part of a long line of men who target judges and courts, believing that "the system" is out to get them because they've lost legal battles with ex-wives or have faced charges of violence against women.

One such man, Thomas Ball, set himself on fire outside a New Hampshire courthouse in 2011, apparently to protest his wife's divorce proceedings and court rulings against him. In a posthumous manifesto mailed to a newspaper, he blamed those things on "the man-hating feminists" who allegedly run the government. Ball's manifesto, however, hints at the real reasons: He admitted he had "slapped" his 4-year-old daughter badly enough to bust open her lip, which he considered a minor transgression but most normal people would view as child abuse.

Ball's dramatic suicide became a rallying point for the "men's rights" community, who saw him as a martyr to their cause, rather than a self-pitying, narcissistic, violent misogynist. Ball's manifesto was posted on sites like A Voice for Men and his call to burn down courthouses was treated as inspirational.

This reaction to misogynist violence is standard in the world of "men's rights" and "incels" and other online forums where men who hate women gather to talk about how they are society's real victims. After Sodini's murders, Tracy Clark-Flory, writing for Salon, found that the online world of "pick-up artists" — a related flavor of men who feel entitled to sex and are bitter they don't get as much as they want — was sympathetic to this murderer, seeing him as a hapless victim instead of a vicious killer. Rodger's long, self-pitying manifesto has become something of a Bible to the "incel" community, who often refer to him as "Saint Elliot."

Despite all this, the media still tends to cover these acts of misogynist violence as isolated events perpetrated by "lone wolf" oddballs, instead of as lethal outbursts from a semi-organized movement that engages in "stochastic terrorism," in which political leaders or movement activists deliberately use provocative and inciting language in hopes of inspiring their followers to commit acts of terrorism (while maintaining some shreds of plausible deniability).

(Let's not forget the long history of violence against abortion providers, a different but related expression of male violence meant to control and punish women for wanting autonomy.)

Online misogynists are spread out over various websites and forums, but they are a discernible movement, just as surely as the "boogaloo" and other white supremacist movements that work in the same way. They have their own jargon, tropes and core beliefs — and they share an enthusiasm for celebrating individual acts of mayhem or terrorism, in hopes of encouraging more o.

But when Reddit recently brought down the hammer on hate speech, in reaction to the Black Lives Matter movement, getting rid of forums like The_Donald that traffic in racist hate speech, they mostly ignored the dozens of forums dedicated to fomenting misogynist hatred.

It's easy to see why. As past coverage of Den Hollander's career makes clear, men who hate women are too easily normalized in our society, and are too often the objects of pity and sympathy rather than seen as the bigots they are. Sympathy for the incel murderer has even reached the pages of the New York Times, as when conservative columnist writer Ross Douthat wrote pityingly of "the unhappiness of incels" and their exclusion from the sexual marketplace, instead of seeing them for what they are, misogynists outraged that women now have the right to say no.

Philosopher Kate Manne coined the term "himpathy" for such sympathetic reactions that center the feelings of men, even truly odious men, over those of women, who, after all, are still being subject to sexual harassment, sexual assault and domestic violence at alarming rates. While the himpathizers often present themselves as trying to find a solution to the problem — if we could only get those incels laid, maybe they wouldn't hurt women! — in reality, this attitude only reinforces the real problem, which is male entitlement.

A man like Den Hollander was fun to laugh at, no doubt. His entitlement, as a middle-aged man who expected the sexual worship of college-aged girls, was undeniably hilarious. But his presence in forums like Fox News, still the nation's highest-rated cable news network, demonstrated that there's still considerable social support for his core belief — one shared by an increasingly bitter and violent online community — that women exist to serve men and that their reluctance to be servile is a violation of men's rights. The #MeToo movement has done a lot in recent years to help dismantle this view, but we clearly have a long way to go.