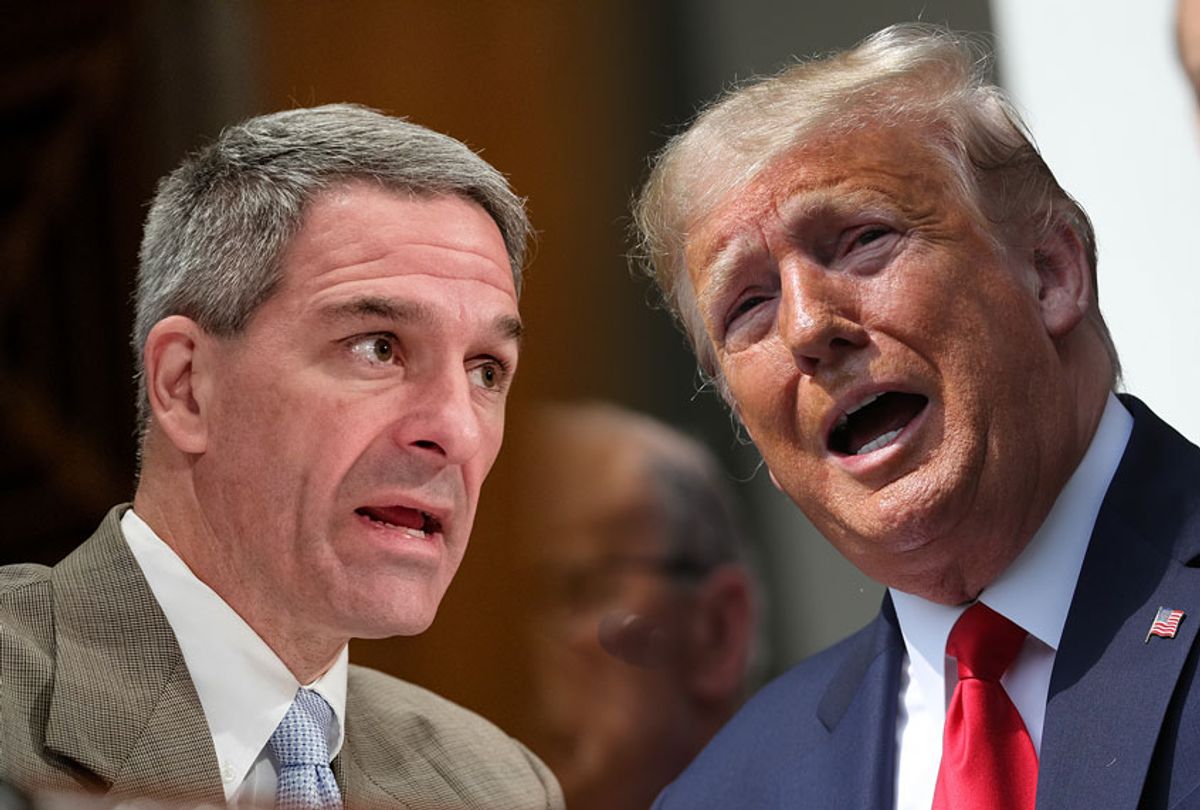 The Department of Homeland Security (DHS) authorized domestic surveillance to identify threats against monuments and statues in response to President Donald Trump's executive order targeting vandalism against federal memorials, according to a department memo obtained by Lawfare.

The document says DHS personnel are "collecting and reporting on various activities in the context of elevated threats targeting monuments, memorials and statues." It also provides legal guidance on the "expanded intelligence activities necessary to mitigate the significant threat to homeland security" posed by threats to statues.

Senior DHS official Ken Cuccinelli appeared to refer to intelligence gathering on protests during a Monday interview with CNN.

"We got intelligence about planned attacks on federal facilities," he said in response to questions about the administration's controversial deployment of federal authorities to Portland. "If we get the same kind of intelligence in other places about threats to other facilities or officers, we would respond the same way."

But the memo "makes clear that the authorized intelligence activity covers significantly more than just planned attacks on federal personnel or facilities," wrote Benjamin Wittes, a Lawfare editor, and Steve Vladeck, a national security law expert at the University of Texas School of Law. "It appears to also include planned vandalism of Confederate (and other historical) monuments and statues, whether federally owned or not."

The document provides legal guidance to personnel detailing what kind of intelligence collection is appropriate. The document was issued after Trump signed an executive order on June 26 reasserting that the federal government would prosecute "any person or any entity that destroys, damages, vandalizes or desecrates a monument, memorial or statue within the United States or otherwise vandalizes government property."

The order directed Attorney General William Barr to work with local law enforcement to pursue investigations and prosecutions of alleged monument and statue vandals "regardless of whether such structures are situated on federal property."

Though the order was "widely mocked for not doing anything" since a 2003 statute already made it a crime punishable by up to 10 years in prison to damage any "any structure, plaque, statue or other monument on public property commemorating the service of any person or persons in the armed forces of the United States," Wittes and Vladeck wrote, the DHS appears to be "interpreting the June executive order as defining a new homeland security priority — one that actually justifies intelligence collection."

The document says the legal guidance is "specific to expanded intelligence activities necessary to mitigate the significant threat to homeland security articulated in the president's executive order of June 26, 2020."

It specifically authorizes personnel to "engage in physical surveillance, the use of mail covers and the use of monitoring devices only to the extent permitted by and consistent with [rules limiting their use to counterintelligence investigations]."

"I&A personnel are not permitted to engage in electronic surveillance or unconsented physical searches," it adds. "Use of these techniques within the United States will be coordinated with the Federal Bureau of Investigation."

This means, Wittes and Vladeck wrote, that protesters can "reasonably expect that there will be ongoing DHS collection and analysis of public source information" and likely the social media posts of demonstrators.

The memo clarifies that the surveillance cannot be used "for the sole purpose of monitoring activities protected by the First Amendment or the lawful exercise of other constitutional or legal rights, or for the purpose of suppressing or burdening criticism or dissent." Officials must "establish reasonable belief" that the intelligence collection supports one of the stated missions.

"You may collect information about (i) threats to MMS; (ii) individuals or groups that pose such threats, or their tactics, techniques or procedures (TTPs); and (iii) information that otherwise informs an overall assessment that threats to MMS will materialize," the memo says, adding that "persons merely engaging in non-violent protest activities near MMS or making hyperbolic statements about MMS likely do not constitute a threat to MMS."

A "'threat to MMS' means the infliction of any damage sufficient to impede the purpose or function of the MMS," the memo continues.

"It is unpersuasive, because it should be obvious that vandalism and other damage to monuments, even federal monuments, does not threaten the security of the homeland to any greater extent than most property crimes," Wittes and Vladeck wrote. "The premise is alarming, because it uses the cover of minor property damage, whether to federal property or otherwise, to justify intelligence gathering against ordinary Americans — most of whom have nothing to do with the underlying property damage, and many of whom are engaged in the most American of activities: peacefully protesting their government."